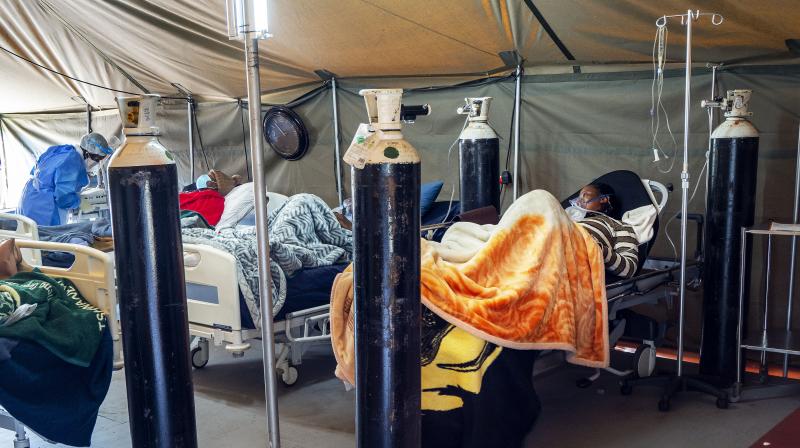 Covid-19 patients are being treated with oxygen at the Tshwane District Hospital in Pretoria, South Africa. (AP)

Vienna: Austria, one of the “frugal four” seeking changes to the European Union’s planned coronavirus recovery fund, wants a bigger share of that aid to go to the bloc’s poorest countries, its leader said in remarks published on Saturday.

Austria, the Netherlands, Denmark and Sweden are among the biggest net contributors to the bloc’s budget and also generally oppose big spending plans. Together they resisted the idea that the fund contain grants, suggesting only loans instead.

The European Commission, the EU’s executive body, has proposed a 750-billion-euro ($847 billion) fund, two thirds of which would be grants. EU leaders hope to hammer out the details at a summit on Friday, and Austrian Chancellor Sebastian Kurz has conceded that he no longer opposes grants entirely but will discuss the mix.

“According to the Brussels plan, Italy, Spain or Poland would benefit the most,” Kurz told German newspaper Frankfurter Allgemeine Sonntagszeitung.

“But in the EU we have significantly poorer countries. My sense of justice tells me: If we in the EU are going to spend that much money, it should primarily flow to the poorest of the poor,” he said, without specifying which countries.

Latvia, Romania, Greece, Croatia and Bulgaria are the poorest countries in the bloc on a per capita basis, according to EU statistics office Eurosthere Austria maintains close relations with Western Balkan countries like Croatia.

Instead of using unemployment figures as of 2015 to decide how much countries should receive, the fund should be allocated according to a measure like how much economic output shrank because of the pandemic, Kurz said.

“Granting aid money must be coupled with conditions. Conditionality is important so that money is not used merely to plug holes in budgets,” he said saying it should be used for green measures, digitisation and “supporting reforms.”