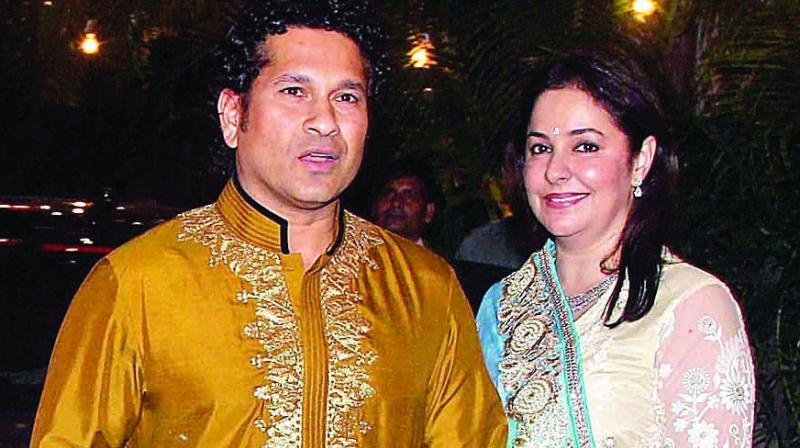 The 25th of May is a special day in the life of Master Blaster Sachin Tendulkar. It is the day he married the then Dr Anjali Mehta, who practiced then as a paediatrician.

The upcoming Monday will mark 25 years of the couple’s marriage. Two of Sachin’s friends reminisce about the big day a quarter of a century ago. Former first-class cricketer Atul Ranade, recalls the day and the wedding affair as a rather private affair with hardly a hundred close relatives and friends from both sides.

“But I remember there were more reporters and photographers, some of whom had arrived from overseas, too, already gathered to cover the news at Worli’s Jewel of India,” recollects Ranade.

“Sachin’s family had requested them not to be in the Jade Garden Banquet Hall, Near Nehru Centre in Mumbai where the wedding was to take place  and to wait outside where they were assured that after the marriage the couple would pose for the photographs. One photographer, however, managed to enter the wedding hall although he was persuaded not to click photos.”

Ranade remembers that it was in the peak of summer, and 25th May that year was a very hot day. “But Sachin kept his word. After they were wedded, Sachin and Anjali came out and seated themselves in the lounge for about eight to ten minutes, letting the photographers take as many photographs as they wished. Thereafter, Sachin and Anjali got into his car, and he drove her off to their home,” adds Atul.

Another cricketer, Atul Bedade, also recalls Sachin and Anjali from the wedding day. “Sachin had shown up in a silky, cream-coloured salwar kurta, which had been tailored at a Hill Road boutique owned by Asha Bhosle, called Anja San. Anjali was in a red-coloured outfit salwar,” he tells us.

For a man who loves milestones, Sachin probably is desperate to celebrate the twenty-five years of being married to the love of his life. Yet, with the lockdown still in place in Mumbai, that doesn’t seem like a possibility this year.

“He would certainly have liked to throw a party for his relatives and friends to mark the their silver anniversary, but it will be a low key affair this year, thanks to the Coronavirus,” quips Ranade. “Of course, some of us friends plan to wish the couple over a video call that day. We will then all meet once again once the situation improves.”

Anjali, a gold-medallist paediatrician from Mumbai University, had decided to let go of her career for the sake of bringing up her children, daughter Sara and son Arjun. “But I have no doubt that had she chosen to remain in the profession, she would have been a massive success,” points out Ranade.

Ranade also tells us that the couple, who hail from different family backgrounds, have always been deeply respectful and loving to each other’s family. Ranade tells us how the down-to-earth duo does a lot of charity work but never claims publicity for it. “A few months ago, his family cook’s father was ill in Sikkim, and Sachin made all his travel arrangements so the cook could be with his father,” adds Ranade.

Bedade adds another once, several years ago, Sachin donated his entire provident fund amount while working for a Sungrace Mafatlal company to a needy kidney patient .”

While wishing them both a beautiful twenty-fifth anniversary, Ranade also comments on how the two wonderful people and made for each other. “Here’s wishing them a great day and many more happy days in life,” adds Ranade.