Ironically, for India’s millions of poor, informal workers and farmers, informality around land tenure is an inevitable reality 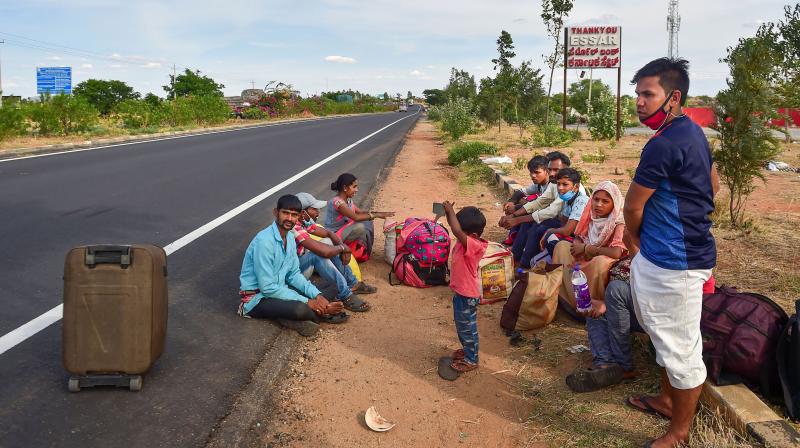 Migrants take rest along the national highway, during their journey towards their native place, amid the ongoing nationwide COVID-19 lockdown, at Devanahalli near Bengaluru. PTI Photo

Prime Minister Modi just announced post-Covid economic revival with a INR 2 trillion package underlining  focus on ‘land’. This comes almost a fortnight after launching of SVAMITVA, a scheme aiming to improve rural housing land and property rights, using Drone technology and involving Panchayats to monetizing rural housing property. The imperative now is to see if and how both are connected and if connecting them could boost rural economy while also reviving it from covid19-backlash.

It looks more important, as the national media, in the COVID19 wave with an inevitable bias for Urban India, so far, has completely missed to analyse this important scheme. Nevertheless, Svamitva remains critical for Bharat, as it aims to cover all 6.62 lakh villages and generate hundreds of millions of rural property cards, with substantive financial, employment and economic implications.

Ironically, for India’s millions of poor, informal workers and farmers, informality around land tenure is an inevitable reality. The informality accompanies them as they live in urban slums, when they cultivate farm lands on lease and as they stay in their village homes.  It is the last informality around rural homestead lands and house property, that remain least visible, yet a grim reality in India.  And addressing it at a time when many hopes are lost, by connecting SVAMITVA and INR 2 trillion package, provides a rare opportunity to trigger an inclusive rural revival.

Indian households hold 77 percent share of their wealth in land and property, more than China (62 percent) and US  (44 percent) as per a RBI Report in 2017, but with poor capitalisation. Absence of a legally robust property documents make these household land assets ‘dead capital’, as per economist, Hernando de Soto.

In this context, launching of Central Sector scheme, “SVAMITVA – Survey of Villages And Mapping With Improvised Technology in Village Areas” on 24th April 2020, amidst COVID19 lockdown, can be seen as a hope for rural revival, post-Covid.  This scheme, aims to  generate property cards, to facilitate monetization of rural residential assets for credit and other financial services. Led by Ministry of Panchayati Raj, it aims at surveying the rural inhabited land parcels using Drone technology and involving Gram Panchayats.

With seemingly right ingredients and right intentions,  its guidelines demonstrate a unique combination of partnerships, participation, democratization and technology innovation to secure rural property rights and tenures in India.

The idea for this scheme comes from a Maharashtra pilot, where Revenue Department piloted a survey in conjunction with Survey of India to help the Rural Development Department build a GIS based Property (Tax) Register.

In other group of states,  inhabited area of villages are not surveyed till date. With the  colonial administration’s focus on surveying farm lands, their main source of revenue, village housing sites or inhabited areas used to be left un-surveyed.  States/regions carved out of Bombay and Madras Presidency as well as from Punjab province, inherits this legacy. While some of the villages were surveyed and settled subsequently for different reasons, still a majority of them continue as such viz. Lal Dora areas in Delhi and Haryana and Gaothan lands in Maharashtra.

Svamitva, aims to provide an integrated property validation solution addressing both kind of the problems and issuing property cards to the property owners in all states.

That land records in most states lack a gender column need to be taken note of in designing the property records. All names of family members,  including that of women, need to be recorded. Survey should ensure proactive inclusion of dalits, windows and other such households, who lacks visibility and voice, and known to be usually marginalized.

Most states lack survey manpower, which will be needed now massively. Provisions of private or licensed surveyors, as permitted in new survey laws in many states can be tapped; to train and remuneratively engage rural youth. With potential generation of at least one million of rural employment @ 1-2 surveyor for a village, this can boost post-Covid economy. These  rural surveyors, will be very useful for subsequent updating of rural property records.

Panchayat is involved  across most steps of the scheme implementation.  Adequate capacity and accountability building will be critical to ensure they follow democratic norms, not tyranny, land also wields power.

While drones have demonstrated success in the pilots of Survey of India, they also raise expectations, has limitation in terms of flying regulations under new Drone Policy. Therefore, space for following Fit for Purpose approaches including use of other adaptive digital tools fitting to the diverse rural and biophysical contexts must be kept open.

In this scheme, Government of India contributes 10 percent while expecting the states to the mobilize the rest 90 percent, which may be difficult at the time of COVID crisis, when their revenue receipt has nosedived.

Maharashtra pilot shows that households can pay for the property card, which makes it revenue neutral. States, therefore, may need only some seed money. Available Financial Commission grants for Panchayats with its flexible spending options, Tribal Sub Plan and Special Component Plans for specific geographies  as well as long-term loan from NABARD can be some sources of potential financing mechanism that states might consider exploring. A small allocation from INR 2 trillion grant can be vastly useful.

Secure land tenure alleviate poverty and propel economies, when identified with transparent and updated land and property records.  Despite this hegemonic discourse, both markets and states have failed to deliver secure land and property rights in many countries including India.

Svamitva, seems a bold reformistic step and can be a real game changer to tackle post-Covid-revival while setting right this chronic land rights problem, provided states buy in politically, as land is a state subject and center supports financially. It can also be a very productive investment to bring adequate and dignified cash in the hands of the millions of informal poor migrants, now converged in rural India.

Pranab is the Founder-Coordinator of NRMC Centre for Land Governance. Chockalingam is the Settlement Commissioner, Government of Maharashtra.