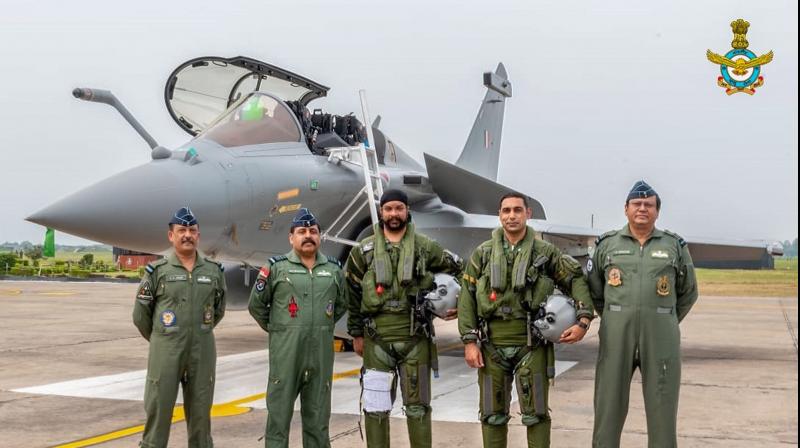 Rafale jets touching Indian soil are most welcome. The literal meaning of “Rafale” in French is a “gust of wind” and “burst of fire”.

As the meaning suggests, the winds are blowing in favour of India and fire is bursting towards the infiltrators.

Five Rafale fighter jets (the first batch in the deal of 36) landing in Ambala is a welcome step when there is imminent threat to our sovereignty from our neighbours.

In 2001, the Government of India placed an order for Rafale jets which are multi-role combat aircraft for the Indian Air Force. Due to the Narendra Modi government’s untiring efforts, the jets became part of our air force after 19 long years.

When Modi visited France in 2015, the government eased the complicated rules and arrested the red-tapism generally prevalent in the defence sector. Finally, we got our first batch of jets at a crucial time when the country is facing aggression and tough times.

I appreciate the agreement signed in September 2016 between India and France namely the inter-governmental agreement (IGA) for the acquisition of 36 fighter jets, a deal worth Rs 60,000 crores.

Out of the 36 Rafale aircraft, 30 will be fighter jets and six will be trainers.

The jets could be purchased only because PM Narendra Modi took the right decision to get these aircraft through an inter-governmental agreement with France, after the long-pending procurement process.

I do not want to go into the details of the political criticism of this deal. To me a price cap cannot be put on defending our country’s sovereignty and the independence of our people.

To my party, there can be no compromise on saving our frontiers and our citizens from flagrant violation of our independence.

This is the time to rally behind Modi and his efforts to keep India safe and to send a bold and united message to our neighbours that India is not a country to be trifled with and we will protect our country and its frontiers at any cost.

The French-made Rafales are India’s first major acquisition of fighter planes in 23 years, since the Sukhoi jets were imported from Russia. It is a proud moment for all Indians.

Modernising our air force will enhance our bargaining power with our neighbours and send across a strong signal that we are bargaining from a position of strength and will not hesitate to show our might if our borders are violated.

There will not be any Balakot kind of strikes or intrusions since we have sent a strong message with these jets.

The moment these steel birds landed on Indian soil, Pakistan was rattled as was evident from its set of complaints reported in the Pakistani media.

Had India had this capability during the aerial encounter with Pakistan last year, many Pakistani F-16s would have been destroyed.

The ability to strike air-to-air targets from up to 150 km away and safely hit land targets 300 km within enemy territory, make India’s Rafales some of the deadliest fighter jets flying in the world.

The arrival of the Rafales could not have been more timely. With Chinese slow to de-escalate at the borders, our airforce cannot make a more emphatic statement.

Even though it’s believed to be a 5th generation fighter it is probably at best a 3.5 generation aircraft. It’s got a third-generation engine as we have in the Sukhoi,” said Air Marshal R Nambiar (retd), who flight-tested the Rafale fighter jets for India.

It is a well-known fact that the Rafale jets we have received are more powerful than China’s J-20s, Pakistan’s JF-17’s or Pakistan’s F16. The touchdown of Rafale combat aircraft in India is the beginning of a new era in our military history.

The Rafale is a twin jet fighter aircraft able to operate as air-to-air fighters and air-to-ground fighters.

The state-of-the-art 4.5 Generation Rafale jet can reach almost double the speed of sound, with a top speed of 1.8 Mach.

With its multi-role capabilities, including electronic warfare, air defence, ground support and in-depth strikes Rafale can also carry more fuel and weapons than the J20. The jets come with one of the most advanced Meteor air-to-air missiles.

Two F16s need to combine together to counter-challenge a single Rafale in the air. Indian aircraft need not cross the LoC and surgical strikes can be done from deep within Indian soil only.

The aircraft can take out the enemy aircraft from a range of more than 100 kms. The aircraft supplied to India are more sophisticated than the ones Egypt or France are using now.

This kind of sophisticated infrastructure is essential for Indian forces in these challenging times.

Not only they strengthen the military power of India but also change India’s position in the South Asia.

It is a well-known fact that a powerful country cannot be taken lightly by its neighbours.

In this critical time, with the world facing a life-threatening health crisis, it is indeed sad that certain countries actually feel the need to launch full-fledged warfare where precious Indian lives were lost. India cannot allow this to happen.

Hence, I welcome the Rafales wholeheartedly. I hope the remaining “birds of steel” will land as soon as possible.