When Boris Johnson moved into 10 Downing Street, he hired Dominic Cummings as chief adviser, a post which gave him more clout over policy 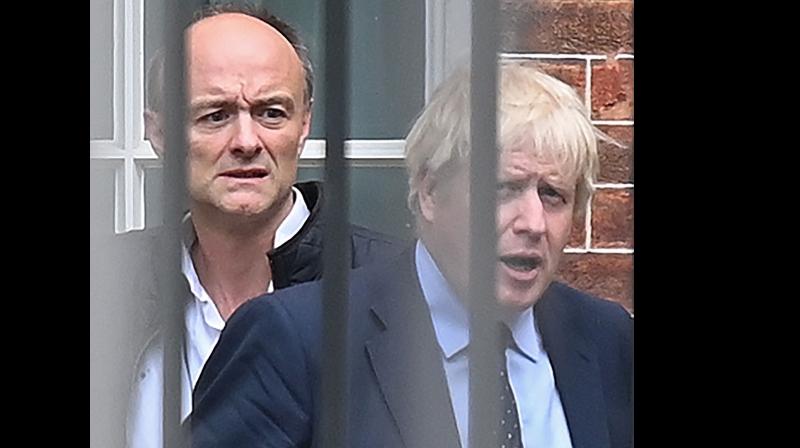 In this file photo taken on September 03, 2019 Britain's Prime Minister Boris Johnson (R) and his special advisor Dominic Cummings leave from the rear of Downing Street in central London on September 3, 2019, before heading to the Houses of Parliament.AFP Photo

“Leave no stone unturned
It’s where the maggots hide
Get a whip and lash the waves
We have to turn the tide.

Pride comes before a fall
Was Humpty Dumpty proud?
Or was he just a grinning egg
Perched high above the crowd?”
— From Sitafications by Bachchoo

When Boris Johnson moved into 10 Downing Street, he hired one Dominic Cummings as his chief adviser, a post which would give him more clout over policy than any minister. Dombo set out to recruit a team and specified that they should be weirdos, eccentrics and without expertise in anything. He wanted a force to fight the civil service, the bastion against eccentricity.

When I heard of this call, gentle reader, I became expectantly excited. Any minute now the phone would ring and I would be invited into Downing Street and be introduced to Boris Johnson. I would, of course, confess that I already knew Mr Johnson and had even once introduced him to an infamous serial killer. Perhaps my acquaintance with the PM would strengthen Dombo’s resolve to hire me and entrust me with the formulation of some dynamic eccentric policies.

I was also looking forward to cancelling chancellor Rishi Sunak’s plans to hand over millions of pounds of tax-payers’ money to billionaires who had registered themselves in tax-dodging havens. I’d have to be careful: Boris’ party depends to a large extent on donations from tax-dodgers. Where would democracy be without them?

Then, as the days passed and I waited with my phone switched on and under my pillow, for Mr Cummings’ call, it struck me that the last thing I should boast about was my established acquaintance with the Prime Minister. Dombo might feel threatened by that connection and wouldn’t want anyone closer to BoJo than he was.

One of the first people this Cummings wished to appoint was denounced in the press as an unsavoury racist and, though that wouldn’t have been an impediment to his assisting this government, the public outcry nullified the appointment.

And now, gentle reader, my prospects for this top job, joining the team of weirdos and people who are adept at thinking the obvious — and passing it off as a stroke of genius — are fast fading. This is because Dominic is in deep trouble being, as we Brits say, up the unsavoury creek without a paddle. He may have been just about to call me when misfortune distracted his attention.

Let me explain: the government has issued rules and regulations, enforceable by police, to the general public to combat the rising number of deaths owing to Covid-19. The rules state that if you have symptoms you should not leave your home or even your bed, unless it’s to be conveyed to hospital. The rules, possibly overseen by Dombo himself, say that the only journeys one is allowed to undertake are for sustenance, exercise, medicines or to go to work as an essential worker — nurses, doctors, carers, dustmen, police, fire service workers etc.

Dombo didn’t stick to these rules. He travelled with his wife and child 260 miles to Durham on his mother’s birthday. Then he was spotted, again with his wife on her birthday, visiting a tourist spot 25 miles outside Durham. Excusing himself on TV, he denied believing that the rules that kept children from seeing or looking after sick parents, didn’t apply to him. He had broken no rule by arrogantly travelling how and when he pleased. His excuses were pathetic and contradictory. He said he took his wife on the journey because she had symptoms of Covid-19. He travelled to the holiday spot to test his eyesight. Right!

Newspapers reflected the huge outcry demanding his resignation. Boris Johnson and other ministers said Dombo had not broken any rules and must stay on. Nevertheless, the call from the Opposition parties and from sections of his own party and from the public and media for him to get lost, are this week the clamour of the country.

Boris refuses, categorically, to dismiss Dombo or accept his resignation. Some say this is because, despite the widespread outrage, he needs Dombo to initiate policies because he himself has none. It may be that BoJo has no idea how to govern the country, but the mystery is why he relies on Dombo to fill that gap. The only thing Dominic Cummings’ reputation for being an acute mind rests on is his perception that the British public would, even if threatened with the slaughter of their firstborn, vote to keep foreigners out — in a referendum and in a general election. I can’t see what’s clever about that. It’s as obvious a fact as the sun rising in the morning.

But Dombo has built this entire illusionary career out of articulating it.

Obviously, when Dombo is projected out of Downing Street, BoJo will need a replacement. If he is looking for someone who believes that the British public will, if given the choice, vote to keep foreigners out, then he needn’t look very far. Even before the referendum I knew that the xenophobes would support keeping foreigners out. Like Dombo, I don’t wear a suit or even a tie on most occasions. I am not a member of any political party and acquired a slight reputation for eccentricity when I invented Marmite lassi.

I am also ready to speak truth to power — mainly to the policies of this government. Ich Dien — I am willing to serve.