Can India overcome its racial prejudices?

The problem is that Indian culture has a shadowy core full of festering toxic beliefs. 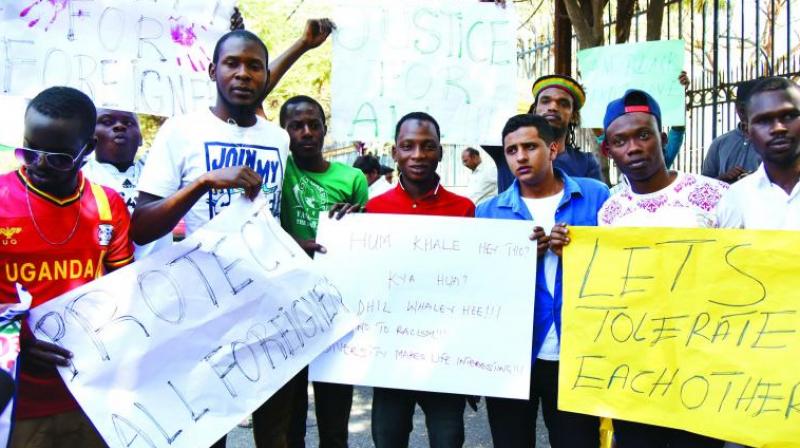 In the heart of India broods a subcontinent of darkness, shaped by centuries of crippling traditions, grotesque superstitions and formulated by the arrogance of ignorance. Occasionally, the darkness erupts in a show of primeval violence.

The latest episode in this recurrent dynamic was the murderous mob attack on a group of African students in Greater Noida, a suburb of New Delhi. Scores of local toughs pounced upon unprepared Africans, including girls, at a local shopping mall and beat them mercilessly. The proximate cause of the attack was the death of a local student caused by an overdose of drugs allegedly supplied by an African.

The police interceded much later, and arrested four or five youngsters. This did little to prevent locals from continuing to threaten Africans and demand that they leave.

The African student community in Greater Noida went into shock, stopped attending classes and many bought a ticket home. The local authorities advised African students to stay indoors as roving mobs were reported moving around the town.

The most monstrous part of the shameful episode was the local support for the hooligans behind the attack. In Greater Noida, rumour had it that Africans were not only drug dealers but cannibals as well who steal and feast on children.

This kind of highly offensive views on Africans is shared by a large number of Indians, mostly in north India but also in other parts of the country, though perhaps to a somewhat lesser extent.

It is this mindset that is responsible for recurring racial attacks on and the abuse of Africans, who are so bitter about their treatment by the average Indian that they claim cows get better treatment here.

The notion of an African as a maneating sub-human species is only conceivable in a worldview so steeped in ignorance and primitive fears that it negates the idea of India as an evolved civilisation.

It reflects a massive sullen morbidity in the collective Indian consciousness, one that is far gloomier than the once uncharted interiors of the great African continent.

In the nation’s capital, Africans are routinely abused, beaten and robbed in broad daylight. In May last year, a young Congolese was beaten to death near a prominent south Delhi residential area. At around the same time, 12 Africans in Rajpur Khurd village in south Delhi were thrashed mercilessly by locals because of their alleged “loose morals”.

In 2014, a local legislator led a mob to south Delhi’s Khirki Extension where his men assaulted four African women — two Nigerians and two Ugandans. The politician claimed the African women were on drugs and indulged in prostitution. None of the charges stuck as the government hospital where the injured women were admitted said they had no traces of any drugs in their blood. The legislator got away scot-free.

There is no concerted effort by either the government or civil society to counter egregious racial prejudices inherent in our society. This provides an open field to racist aggressors responsible for the spate of brutal attacks on Africans, people with Mongoloid features (including Indians from the Northeast) and other foreign-looking individuals.

In the worldview of the local brute, the outsider is to be despised, abused and assaulted; the outsider is not just different but evil and threatening as well. This is a mindset reminiscent of the Neanderthal slouching through primordial jungles, and not of a modern civilised individual.

The problem is that Indian culture has a shadowy core full of festering toxic beliefs. This often infects the best of us.

More than 120 years ago, a young Indian lawyer Mohandas Karamchand Gandhi arrived in South Africa with ingrained racist views about black Africans, whom he referred to as kaffirs. The early racist statements by Gandhi haven’t been forgotten in parts of Africa even today, although as Nelson Mandela explained in a 1995 article: “Gandhi must be forgiven those prejudices and judged in the context of the time and circumstances. We are looking here at the young Gandhi, still to become a Mahatma, when he was without any human prejudice save that in favour of truth and justice.”

Last year in Ghana, a university was forced to take down a statue of Gandhi after widespread local protests over his alleged racism. But Gandhi did not remain a racist, and quickly evolved away from it. The transformation came at a railway station at Pietermaritzburg where he was evicted from a first-class compartment due to his colour on the night of June 7, 1893.

This marked the beginning of his fight against racial oppression. Hermann Kallenbach, an associate of Gandhi, described in a 1937 interview how the two of them began to express solidarity with black people in South Africa: “A black man may not use tramcars, so we walked together for miles. A black man may not use a hotel lift and bathroom, so both of us gladly left the use of both. A black man may not eat in the common dining room (so) I said I would not go there myself and we had our food in our rooms.”

Gandhi, who went on to establish the Tolstoy Farm in South Africa, worked with many prominent black South Africans involved in the establishment of the African National Congress that eventually led to the end of apartheid.

Several African leaders, including Nelson Mandela, have acknowledged Gandhi’s role in the fight against racism. The former Emperor of Ethiopia, Haile Selassie I, once declared: “Mahatma Gandhi will always be remembered as long as free men and those who love freedom and justice live.”

The dismal reality is that even a century after Gandhi’s transformation in South Africa, the majority in India remain hostage to discredited values which continue to be passed on to new generations. The darkness is thus perpetuated and taints the entire subcontinent.

Though said in a different context, the famous words of Rosa Parks, the mother of the civil rights movement in America, are equally relevant in today’s Indian context: “Racism is still with us. But it is up to us to prepare our children for what they have to meet, and, hopefully, we shall overcome.”