Get ready to celebrate the festival in April. The coronavirus can take care of itself. 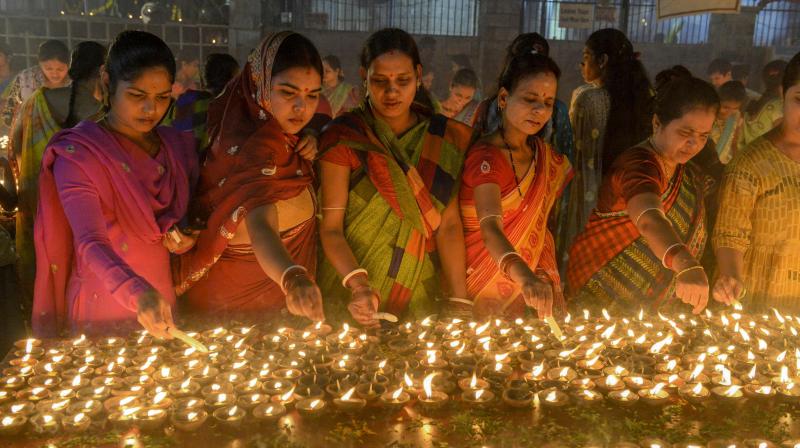 An avalanche of mixed reactions followed the prime minister's message to light a lamp on Sunday. (AFP)

“Light a diya at 9 pm on Sunday…,” Prime Minister Narendra Modi told an anxious nation on Friday morning. A candle will do, he said.

And an avalanche of mixed reactions followed his 9 am telecast. We had two days and 12 hours to get our diyas and candles and our emotions together. The initial reaction was one of immense relief… citizens had been prepared for the worst: an extension of the nationwide lockdown beyond April 14.

Then came the disbelief. Considering that the Railways had opened online bookings (and sold out within hours), an extension of the lockdown at this point would have led to collective mayhem and open defiance. The poor camel’s back was breaking in any case -- one more straw? No way.

So yes, there was relief as viewers let out their breaths and sighed: “Okay… one more stunt after the ghantis and thaalis nonsense. We can handle that.”

The outrage came a little later, when one analysed the diya gimmick. Was it as absurd as it appeared? Or was there shrewd calculation behind the announcement? I would go with the latter.

Nothing that Narendra Modi does can be taken at face value. To a large extent, he pulled off the thaalis and ghantis trick -- everyone fell for it. After all, it was meant as a tribute to our medical fraternity, and who can grudge them that?

Well… it’s the same doctors today who are imploring the same government to do something about their deplorable working conditions. They were heard talking to media anchors and saying what needed to be said: “We feel like we are signing our death warrants… we work on the frontlines wearing raincoats! They offer zero protection. We are struggling to cope, minus equipment, masks, basic facilities and the all-important protective gear that is given to doctors and nursing staff everywhere else.”

As if this indictment was not bad enough, doctors are being targeted and attacked for merely doing their jobs. Like it happened in Indore, where two doctors were pelted with stones when they arrived with testing kits. The levels of rage and frustration across India have risen dramatically during a very tense week when all eyes were fixed on tracking the number of fresh cases.

In such a grim scenario, a supposedly upbeat message from the PM which is designed to make panicky citizens feel better may not be a bad thing. Provided it is backed by far more substantive relief measures.

If India is to follow an international leadership model during a mega crisis, let it be one where our PM announces specific and concrete schemes meant to help those who are experiencing unprecedented distress -- our poor and homeless, our migrants and our labour force.

It seems like a cruel joke to ask them to light diyas and candles when they don’t have food to eat, and there are countless hungry mouths waiting to be fed. Diyas require oil for the wick to burn. Thousands of citizens lack even watery gruel to keep themselves alive. You are asking them to buy candles and waste precious oil lighting diyas?

As symbolic gestures go, this is the most illogical one. It’s a little like Donald Trump asking all Americans to pretend it’s Christmas in April, and light up trees! Come on… it’s really not okay to treat your people like imbeciles!

On a more positive note, I read a short but pertinent report circulated by Dr Nandkumar Kamat, a Goa-based microbiologist, which pepped me up no end, even as I was processing the PM’s Diya Jalao speech. According to this good doctor, we in India may be spared the brutal brunt of the Covid-19 virus because of the natural immunity we have willy-nilly built up, living as we have for centuries in an environment that is far from sanitised -- in short, we live with dirt and germs and microbes and other lethal stuff from childhood, unlike America and large parts of Europe, continents that are obsessive about maintaining a scrupulously sanitised and sterile environment.

Dr Kamat mentions “herd immunity” that protects us during huge congregations like the Kumbh Mela. He also mentions the hidden benefits of consuming fermented foods which are a part of most Indian diets. He calls this the “Dirtiness Exposure Dividend” of Indians, which may turn out to be an asset during this terrible scourge.

Eccentric or authentic, at this point I don’t really care. He also lists out what we can do to protect ourselves, regardless, and approves of the lockdown and says India can be declared Covid-19 free if the rate of new cases and deaths actually falls after April 14.

Amid all the overkill and overload of information, this was one shared forward that did make sense to me. So far, we have managed our numbers reasonably well. God knows what we have in store for us down the line. Our media coverage has been balanced and fair for the most part -- except for the hysterical and embarrassing reaction to the Nizamuddin “incident” – I don’t know what else to label it.

Across India, the sombre mood has been about survival, so for those who get their kicks from playing the blame game and creating divisiveness through demonising all Muslims, because of the pig-headedness of one maulana, sorry, but blanket hate is not happening. If we start generating hate at this crucial stage, we will end up killing many more of our people than Covid-19 ever could. This particular hate virus is vicious and destructive enough to damage India irreversibly. As the good doctor from Goa says, India will win this war. And I believe him!

Meanwhile, folks, get ready to celebrate Diwali in April! Remember, the gods are watching -- and we have to welcome them with light. The coronavirus can take care of itself.