The government had earlier identified nine trees, which were to be chopped in South Delhi to make space for a road-widening project. 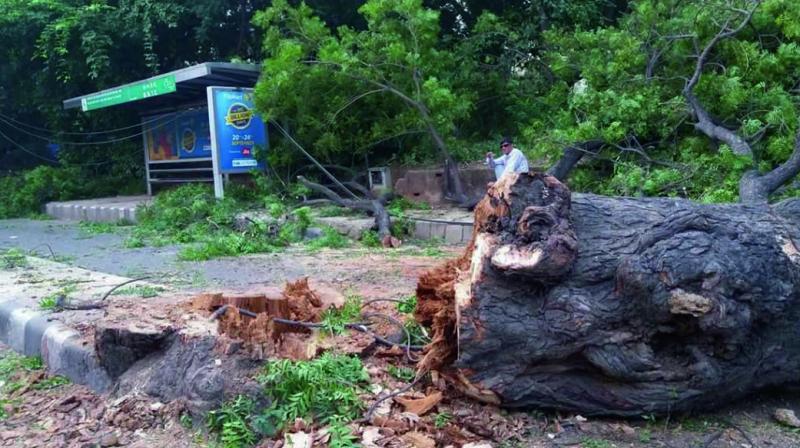 The trees, some of which are around 60-years-old, were also said to be causing “traffic congestion.”

New Delhi: Despite orders from the Delhi environment minister to not cut any trees for widening of roads, four trees on Aurobindo Marg were cut on Saturday night.

The government had earlier identified nine trees, which were to be chopped in South Delhi to make space for a road-widening project. The trees, some of which are around 60-years-old, were also said to be causing “traffic congestion.”

However, after protests from residents and environment activists and after four trees were already cut, Delhi environment minister Imran Hussain directed the authorities to stop any further felling at the site.

Even as the order was in place, PWD and Delhi police carried out felling of four more trees on Saturday night.

After Mr Hussain’s order, the residents gave representations to the L-G (lieutenant government) and were assured that “alternative solutions” would be found. According to a circular issued by the L-G’s office, he has asked the government to consider the matter of “decongestion of Aurobindo Marg without felling of trees” and to find an amicable solution.

“This is a very underhand way of functioning. Police cordoned off the area after 10.30 pm and chopped down the trees. These were trees with huge canopies having a girth of around 300 cm,” said Padmavati Dwivedi, an environment activist and resident of Sarvodaya Enclave.

“We were supposed to have a meeting with the LG’s office, but it never materialised. They never looked for solutions. In fact, they didn’t remove the municipal pole, which is also blocking the way. Only trees were cut because they want to make money out of the wood,” she said.

The government had earlier said that some of the trees, which will be cut, will be transplanted to other locations. However, no such measures have been taken yet.

“How can they reduce pollution if they cut so many trees? This is being done to accommodate more polluting cars on the roads. Removing trees is no solution for polluted cities,” she added.