Will support if cow is made national animal: Jamiat chief

An ‘atmosphere of fear’ prevails in the country due to incidents of violence, that included even murder by cow vigilantes, Madani said. 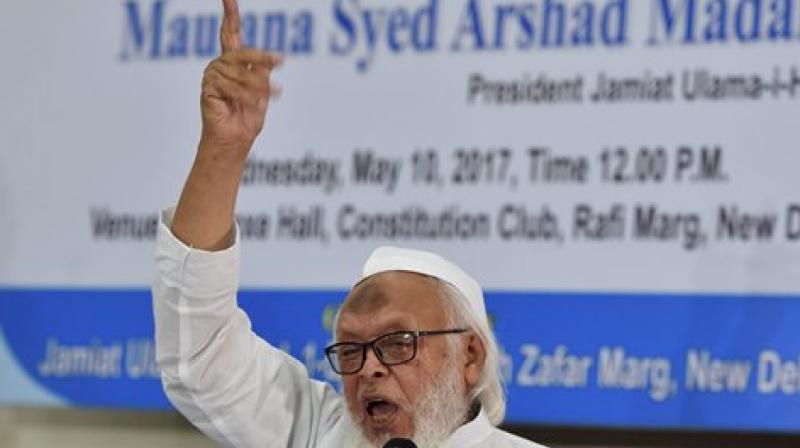 New Delhi: The government should consider according national animal status to the cow, Jamiat Ulema-i-Hind president Maulana Syed Arshad Madani said on Wednesday while expressing concern at the ‘atmosphere of fear’ following violence by 'gau rakshaks'.

"The government should give national animal status to the cow and we will support it," Madani, who heads the influential body that represents a large number of Islamic scholars in the country, said at a press conference.

An ‘atmosphere of fear’ prevails in the country due to incidents of violence, that included even murder, by cow vigilantes, he said.

"These young gau rakshaks are exploiting religion to loot and murder people and taking law into their own hands. We respect the religious sentiments of our Hindu brethren but no one can be allowed to take law and order into their own hands," he said.

Referring to the issue of triple talaq that is likely to come up in the Supreme Court on Thursday, he said it was a religious matter and could only have a religious solution.

"If the Supreme Court comes out with such an acceptable solution, we will welcome it," Madani said.

The apex court, he added, should ask the ulemas, or Islamic scholars, to discuss its objections and come out with solutions before direct intervention in the matter.

"... the court should give a chance to the ulemas to discuss and sort out its objections over triple talaq. Then they (Supreme Court) may consider those solutions and give judgement. Such a judgement based on religious interpretation will be acceptable to us," he said.

The matter was being ‘blown out of proportion’ by the media and now even the Supreme Court was inclined to intervene in it, Madani said.

‘The way triple talaq is being talked about these days, it appears as though there are divorced women in every household and each Muslim man has four wives.’

Islamic law gives 14 rights to a married woman who can seek talaq if she feels any of these rights are infringed by her husband, he said.

The Jamiat president also referred to the Guwahati High Court order on citizenship in Assam. It had created a situation where 48 lakh married women in the state stood to lose their citizenship, he said.

The Jamiat Ulema-i-Hind has challenged the High Court order on residency certificates in the Supreme Court, he added.