Law on ownership rights in next Parliament session: PM Modi

The meeting was telecast live on the Facebook page of BJP’s Delhi unit. 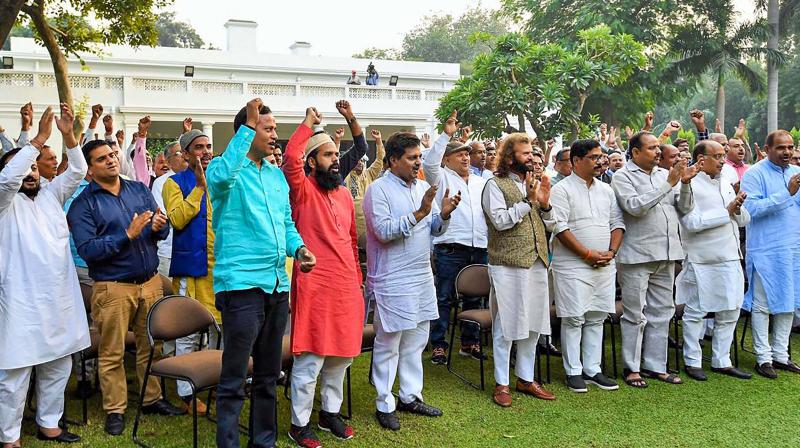 NEW DELHI: Prime Minister Narendra Modi on Friday assured a delegation of over 200 people, including BJP MPs from Delhi, that a law will be enacted by Parliament to grant ownership rights to the residents of unauthorised colonies in the national capital.

Separately, at an event, Union housing and urban affairs minister Hardeep Singh Puri said the registration of properties in unauthorised colonies will start in 7-10 days. The Union Cabinet last month approved a proposal to grant ownership rights to people living in 1,797 unauthorised colonies in Delhi, a move likely to benefit nearly 40 lakh people in the city.

The delegation which met the Prime Minister at his residence on Friday included residents of unauthorised colonies, activists who had been waging a struggle for such rights, and BJP lawmakers from Delhi. The members thanked PM Modi for the decision on providing ownership rights. The meeting was telecast live on the Facebook page of BJP’s Delhi unit.

“A law will be passed in the upcoming Winter Session of Parliament,” Mr Modi told the delegation. The Prime Minister said his government decided to end “uncertainty” in the life of the residents of unauthorised colonies who lived a difficult life.

He said it was his “destiny” to end “uncertainty” in the life of people, and also cited the abrogation of Article 370 and the law banning triple talaq. The Prime Minister congratulated Union minister Mr Puri for his efforts to provide ownership rights to the residents of unauthorised colonies, noting that previous governments failed to do so.

“People had hopes from the previous governments in past decades. Efforts were also made but they were incomplete and influenced by political maths and vote bank considerations.”

He said a way was being found to resolve the issue of unauthorised colonies since BJP came to power in 2014. Besides, government officials, local BJP MPs, MLAs, councilors also played an important role in framing the policy for according ownership rights to the residents such colonies.

“Soul of this policy is Sabka Saath, Sabka Vikas, Sabka Vishwas. It is indifferent whether residents of a colony are Hindus or Muslims and whether they have voted for the BJP or not,” he said.

The Prime Minister assured that the Government of India will complete the task of regularisation of unauthorised colonies with full responsibility. He said the government has prepared a scheme to finish pending formalities in case of 4.5 lakh houses in major cities of the country to help the middle class.

Saying that owning a house is the greatest wish of the middle class, Mr Modi urged people to help the government in implementing Pradhan Mantri Unauthorised Colonies Awas Yojna (PMUDAY) in Delhi.

Noting that Delhi was “haphazard” but can be rectified, he said the scheme will help the residents of a colony to plan redevelopment of their settlements.

Delhi BJP president and North East Delhi MP Manoj Tiwari, who led the delegation, had said a bill will be passed in Parliament’s Winter Session to give ownership rights to residents of unauthorised colonies in Delhi.

Regularisation of unauthorised colonies has remained a major poll issue in Delhi for decades. The BJP and the ruling AAP have been vying to take credit for it, ahead of Assembly elections due early next year.