The residents of the area are also exposed to various infection and other health hazards. 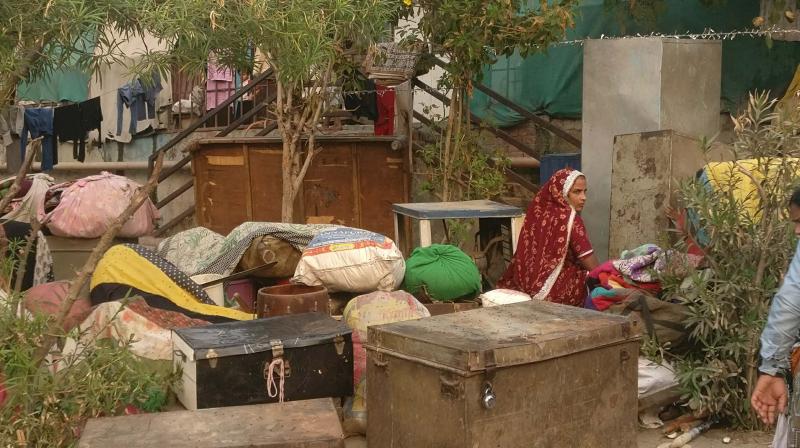 Manju, with her luggage and household items, at a makeshift camp for those displaced from Kathputli Colony.

New Delhi: No roof above their heads, no place for their belongings, overflowing drains and filthy toilets — this is the new ‘home’ for those displaced from Kathputli Colony.

The transit camp at Anand Parbat, which was supposed to be an alternative for people whose houses were demolished, has turned into a nightmare. Many people have been forced to sleep in the open as the 2,800 cabins at the camp are not enough to accommodate those who have been shifted here from the colony.

For 32-year-old Manju, who plays dhol for a living, the demolition drive has been nothing less than a nightmare, one she had been hoping to avoid all this while. She has been sleeping in the open for the last three nights after her house at Kathputli Colony was demolished on October 30.

Sitting on her suitcase, with her luggage strewn around at the start of the street, she says that even though she has been allotted a room, she cannot claim it as the cramped cabin is already occupied by a family of six.

Manju is no exception. Due to the influx of people at the camp after the demolition drive and due to the lack of enough cabins, the authorities have been allotting a single room to many people.

Similarly, 30-year-old Sebunisa said that along with the demolition of her two-storey house at Kathputli Colony, her “idea of a home has been demolished.” “We were at least living in human conditions. Why did they displace us if they didn’t have enough room for all at this camp or at the one in Narela?” she asked.

The residents of the area are also exposed to various infection and other health hazards.

On Thursday, the roads inside the camp were covered with sewer water, which had spilled from a nearby overflowing drain. People who have been here longer, said that it has been more than a week that they complained about the overflow, but nothing was done.

Even though the DDA said that there is “ample supply” of food and water, fights over these have already begun at the site.