Increasing number of urban parents are keeping their kids away from screens till a certain age. 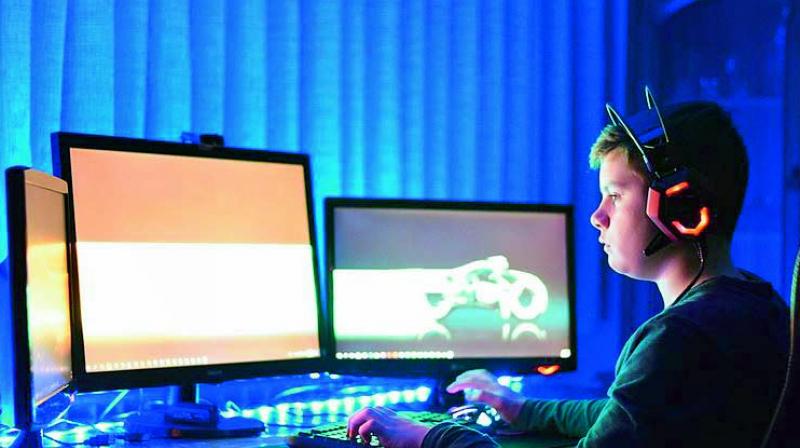 As a mother to a three-year-old, I know that gadgets are addictive. And if you have been around any kid who has been exposed to screens, you will attest to the same. While an increasing number of urban mothers are exposing kids to screens from as early as six months in a bid to keep them entertained, help them eat or even enable them to learn rhymes, shapes and more, a small tribe of parents believe that young kids should not be exposed to screens as it can be detrimental to their neurological development.

If you think zero-gadget parenting is impossible, meet Pavan Goyal, founder, Blue Blocks Montessori school, Hyderabad, who not only raised his kids without exposing them to gadgets till age six, but also asks the parents of all the kids enrolled in his school to do the same. “I am a Montessori trained teacher, and my years of research on the subject led me to realize that it is extremely harmful. In my book ‘Lining the Nest’, I have dedicated a chapter to gadgets and their ill-effects,” he says. His two girls, now aged 8 and 15, were completely kept away from gadgets till the age of six. “Post 6, majority of the neurological structure is in place. So, it is okay to give them a little screen time, may be half an hour,” he says.

While Goyal kept his children away from gadgets till age 6, Aloka Mehta Gambhir, a lactation counsellor and blogger, did the same up till age 4. “I always felt it was better to engage them with books or conversations,” she says. “When my elder son was about 4 and a half, we started letting him watch for a limited time. Even today, my kids watch something on television only on weekends, and not more than an hour.”

In fact, many parents like to limit screen time to only weekends. Natali Thakkar, who recently moved from Mumbai to London, allows her daughter to watch a screen only once a week. “We started this when she was four allowing her to watch for half an hour, now she is 6 and a half and screen time is 45-60 minutes only on weekends,” she says. Talking about her decision to limit screen time, she says, “Screens don’t allow a child to get bored and imagine things and find ways to entertain themselves. My daughter loves reading books, listening to audio books, music and also loves playing with Legos. She reads a lot and her concentration is amazing. She can sit for three hours and do Lego. But the day she watches television, the next two hours post that she is cranky and restless.”

Kiran Tevtiya, Child Behavior Specialist at Bahawa Child Health Clinic, believes the first few years are really important for a child for language development, development of gross and fine motor skills, and much more. “They are learning many skills including learning to  connect socially, learning to eat, learning to behave, and subtle skills like learning to self-entertain and self-soothe. A moving, colorful, interactive screen is highly addictive for children and seconds can turn into hours robbing them from an opportunity to learn during those hours,” she says.

Screens display pictures in 2D while real life is in 3D. “This affects their ability to focus. Children need nature in its pure form and gadgets are the opposite of that. And rapidly changing pictures on screens makes real life look dull and boring in comparison. So they want to keep going back to screens. Also, the emotions that the characters on screen go through may be emotions that a child is not ready to process yet. Why expose kids to emotions they are not yet ready for?” argues Goyal. Talking about the effect of screens on language development and speech, he says earlier he would see only 10 out of 100 of his students having speech delays, but now it is 30 out of 100. “Kids are also getting more violent and aggressive due to screen exposure.”

Tevtiya also lists down the detrimental effects of screen-time. “Overall lack of motivation in real world activities that need perseverance like developing social skills, academics and observational skills; expectation of instant gratification and lack of appreciation of intrinsic value of activities like eating and enjoying food or family time or small talks, all of which need complete involvement, observation and practice on the part of the child. Screen time when used as a filler or distraction robs away the time needed to develop those skills during this critical development stage. Later on the effort required to bring the same amount of learning is much higher and harder.”

Loneliness, stress, lack of proper sleep, depression are other problems that can develop over years with prolonged screen time. “I see so many cases of lack of attention and focus, basic social skills, ability to hold small talks, lack of interest in day to day mundane activities as it takes more effort in real life to get to the same level of instant high that screen time gives,” she explains.

Aloka Mehta believes the “all or nothing” approach may not always work with kids. “So after a certain age, giving them a little screen time may be okay,” she says, adding, if you keep them away for too long, when they do get exposure, they may want to binge.

Tevtiya says the important thing to ask ourselves before giving screens to kids is: Are we using technology to help the child around development areas or as a tool to create shortcuts for us to achieve the aims that we set up for the child for eg. I need a screen for my child to make him finish a bowl full of porridge? Or a shortcut to ‘learning to self soothe or entertain’ or a baby sitter? It’s important to know and understand the difference, she says. Parents must use their judgement.