The MLA was booked a day after his controversial remarks at a pro-CAA demonstration in Ballari. 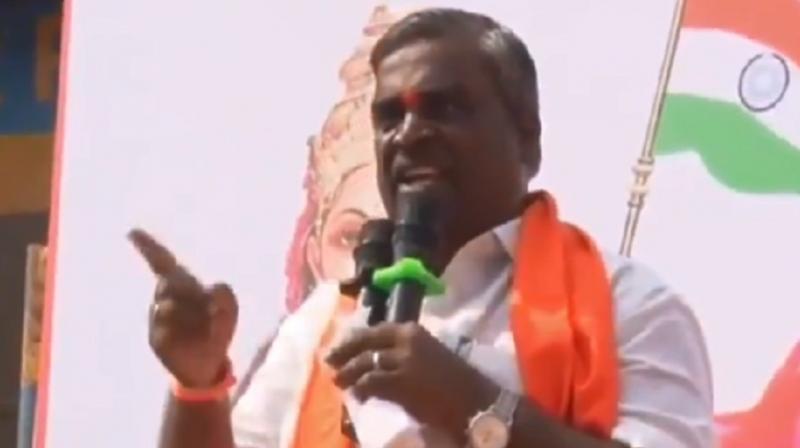 The Case is against the legislator and organisers, for provocative speech, he added in response to a question. (Photo: Screengrab)

Bengaluru: A case was registered against BJP MLA Somashekar Reddy on Saturday for alleged provocative speech targeting those protesting the CAA even as an agitation was staged in Ballari and opposition Congress petitioned the state police chief seeking stern action against him.

The MLA was booked a day after his controversial remarks at a pro-CAA demonstration in Ballari asking those opposing the Citizenship Amendment Act to think of the 'consequences' if the majority community members hit the streets against them, police said.

A delegation of Congress leaders led by former Chief Minister Siddaramaiah submitted a memorandum against the MLA in the state Director General of Police office here and demanded that he be booked for 'sedition'.

"A large gathering of people in Ballari held a protest against the provocative speech and have submitted a memorandum seeking action. I have told them FIR has already been registered and inquiry will be conducted and further action taken," Ballari Superintendent of Police C K Baba said.

Speaking to reporters he said, the case was registered based on the complaint by a local Congress committee member and investigation was on.

The Case is against the legislator and organisers, for provocative speech, he added in response to a question.

Addressing the demonstration in support of the controversial citizenship law, the MLA had said, "If you do any nakra (drama). Then if 100 per cent people come, understand what will be your situation. Congress bevkoofs (idots) are lying to you, believing them you are coming on streets."

Speaking to reporters after submitting the memorandum, Siddaramaiah alleged Somashekar Reddy made the speech with an intention to instigate communal violence.

"Somashekar Reddy has spoken out what is BJPs mindset. His speech was directed against a particular community, he said adding the protests against CAA and National Register of Citizens was not limited to any religion."

Accusing Reddy of speaking against the Constitution despite being an MLA, Siddaramaiah maintained it amounted to sedition and police should have registered a suo-motu case and arrested him.

"Im not sure under what sections they have booked him, he should be booked for sedition, as it is a serious offence and be arrested immediately, this is what we have asked police," he said.

The former chief minister appealed to the public not to get instigated and maintain calm.