TN Health Minister C Vijaya Baskar said: 'It's unfortunate that since morning we can't hear his voice. More teams are on way,' 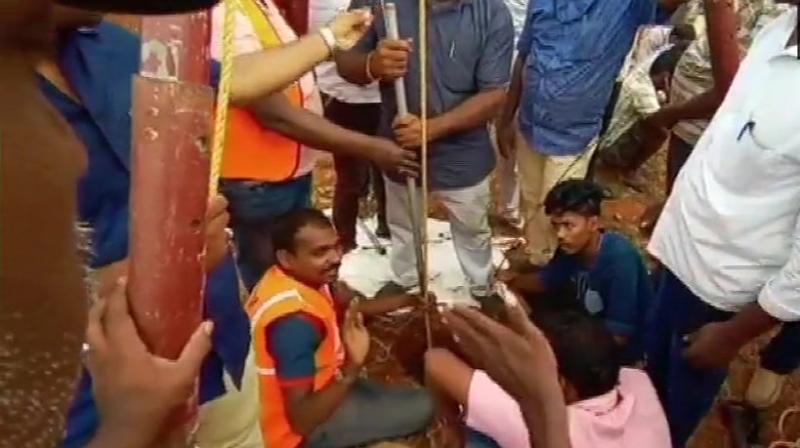 The boy fell into the borewell at about 5:30 pm on Friday. Later at night, he slipped from a depth of 25 feet to 70 feet after the tube-well caved in during the rescue efforts. (Photo: ANI)

Tiruchirappalli: On Saturday, rescue efforts continued to save a two-year-old boy who fell into an abandoned borewell in village in Tamil Nadu’s Tiruchirappalli district.

The boy fell into the borewell at about 5:30 pm on Friday. Later at night, he slipped from a depth of 25 feet to 70 feet after the tube-well caved in during the rescue efforts. The boy is alive and safe as per a medical team on the spot, reported Hindustan Times.

Six teams are pressed into rescue that has also seen four failed attempts to lift the toddler using a rope with a knot at Nadukattuppatti village near Manaparai town in Trichy district, about 370 km from Chennai.

Speaking to a TV channel, Tamil Nadu Health Minister C Vijaya Baskar on Saturday morning said that oxygen was being supplied into the borewell, adding that despite maximum efforts, they have been unable to lift the boy.

"It's unfortunate that since morning we can't hear his voice. More rescue teams are on the way," he was quoted as saying by news agency ANI.

According to News18 report, rescue efforts were being carried out since Friday evening by the fire service department and others.

The Trichy Police said: “Sujith Wilson fell into the borewell, dug up by his father, in an ironic turn of events on Friday evening and his neighbours alerted the family upon hearing his cries. His father, Recto Arockiaraj, had dug the borewell for agricultural purposes.”

Initially, earthmoving equipment was pressed into service to dig a pit near the borewell to reach the boy. But it was stopped midway as the terrain was rocky. Breaking it would result in vibrations that may loosen the soil inside the borewell, thereby sending the boy further down.

Later, the rescue team used a special equipment 'borewell robot'. But that too was not successful.