Triple talaq is a sin, has no sanction in Quran: Supreme Court

The simple question that needs to be answered in this case is only whether triple talaq has any legal sanctity. 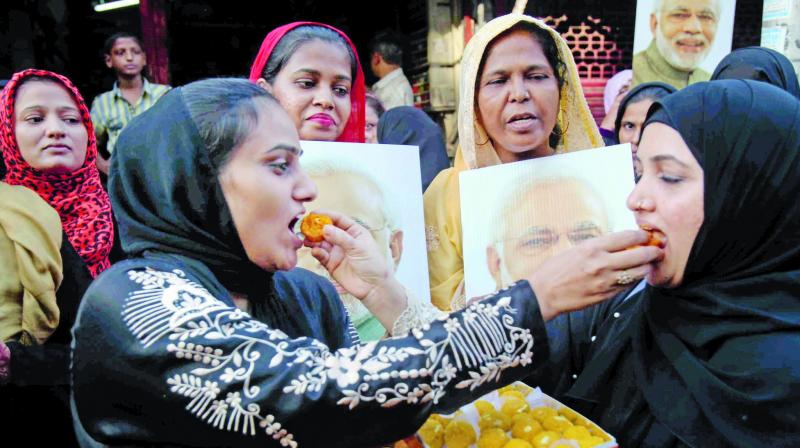 New Delhi: The Supreme Court on Tuesday held that “triple talaq” form of divorce among Muslim men has no sanction in Holy Quran and was bad in law. Here are the observation of the 3 judges.

What is bad in theology was once good in law but after Shariat has been declared as the personal law, whether what is Quranically wrong can be legally right is the issue to be considered in this case. The simple question that needs to be answered in this case is only whether triple talaq has any legal sanctity.

After the advent of Islam, divorce was permitted to a man if his wife by her indocility or bad character renders marital life impossible. In the absence of good reason, no man can justify a divorce for he then draws upon himself the curse of God. Indeed, Prophet Mohammad had declared divorce to be the most disliked of lawful things in the sight of God. The reason for this is not far to seek. It is clear, therefore, that Triple Talaq forms no part of Article 25(1) of the Constitution.

This being the case, the submission on behalf of the Muslim Personal Board that the ball must be bounced back to the legislature does not at all arise. Applying the test of manifest arbitrariness to the case at hand, it is clear that Triple Talaq is a form of Talaq which is itself considered to be something innovative, namely, that it is not in the Sunna, being an irregular or heretical form of Talaq. Given the fact that Triple Talaq is irrevocable, it is obvious that any attempt at reconciliation between the husband and wife by two arbiters from their families, which is essential to save the marital tie, cannot ever take place.

It is clear that this form of Talaq is manifestly arbitrary in the sense that the marital tie can be broken capriciously and whimsically by a Muslim man without any
attempt at reconciliation so as to save it. This form of Talaq must, therefore, be held to be violative of the fundamental right contained under Article 14 of the Constitution of India. "In our opinion, therefore, the 1937 Shariat Act, insofar as it seeks to recognise and enforce Triple Talaq, is within the meaning of the expression "laws in force" in Article 13(1) of the Constitution and must be struck down as being void to the extent that it recognizes and enforces Triple Talaq" Justice Nariman added.

The practice of ‘talaq-e-biddat’ being a constituent of ‘personal law’ has a stature equal to other fundamental rights, conferred in Part III of the Constitution. The practice cannot therefore be set aside, on the ground of being violative of the concept of the constitutional morality, through judicial intervention. Reforms to ‘personal law’ in India, with reference to socially unacceptable practices in different religions, have come about only by way of legislative intervention. The CJI said international conventions and declarations are of no avail in the present controversy, because the practice of ‘talaq-e-biddat’, is a component of ‘personal law.’