Parents of 15-yr-old alleged that their daughter has committed suicide due to low marks in examination, followed by harassment by teachers. 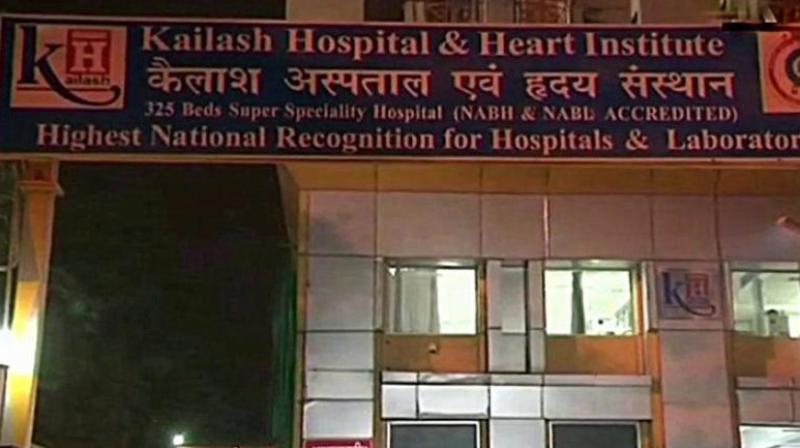 The girl's father and brother immediately rushed her to Kailash Hospital but the doctors could not revive her. (Photo: ANI | Twitter)

New Delhi: A class 9 student was found hanging at her residence in Noida by her parents on Tuesday evening.

Parents of 15-year-old, Ikisha Raghav Shah, alleged that their daughter has committed suicide due to low marks in her examination, followed by harassment by teachers.

Ishika was a student of Ahlcon Public School at Mayur Vihar Phase I in Delhi.

According to reports, Ishika's parents had gone out on Tuesday and she was alone at their home. When they returned after a couple of hours later, around 6 pm, they found the girl's room locked. On breaking open the door, they found her hanging. The girl's father and brother immediately rushed her to Kailash Hospital but the doctors could not revive her.

Doctor of Kailasha Hospital said, "15-year-old girl was brought to us, on arrival her pulse and blood pressure were un-recordable, we tried to revive her but couldn't. Cause of death can be known after postmortem."

Ishika's father blamed the school for killing his daughter. He said, "She (Ishika) told me that her Social Studies (SST) teachers touch her inappropriately. He said, "I said since I'm also a teacher I can say they can't do it, might be a mistake but she said, 'I'm scared of them,no matter how well I write they'll fail me.' Ultimately they failed her in SST. School killed her."

Ikisha's mother alleged that she had often complained about two teachers who were very strict and scolded her regularly. The girl had even refused to go to school, claimed her mother. A case has now been lodged for abetment of suicide against the two teachers.

The girl's family has filed a First Investigation Report against the two teachers.

"Father has alleged that her daughter was harassed by two school teachers & failed her in exams intentionally. Case registered under sections 306 and 506 IPC and POCSO Act, further investigation is underway. Our officers will also visit the school today," said Arun K Singh, SP, City Noida.

Principal of the school assured cooperation with the prbobe agency. "It's an unfortunate incident. School has been following promotion policies of CBSE. Let me make it clear that she had not failed, a re-test was scheduled. We will cooperate with probe agencies," the Principal said.