Third Indian tests positive for corona on ship in Japan

Two crew members, out of total 138 Indians on board the cruise ship Diamond Princess, were tested positive for the virus earlier. 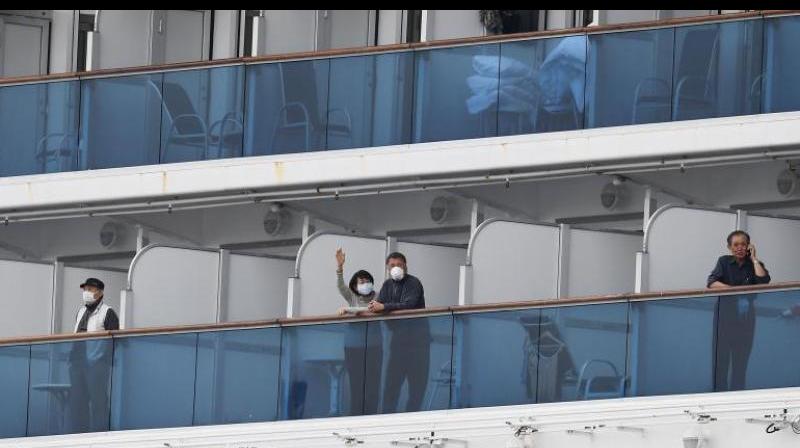 Till date, only passengers arriving from four countries — China, Hong Kong, Thailand and Singapore — were being screened for possible exposure to the respiratory virus at 21 identified airports in India.

New Delhi: The Indian embassy in Japan said on Friday that a third Indian crew on board a cruise ship off the Japanese coast has tested positive for the novel coronavirus as authorities confirmed that total 218 people have been infected with the deadly virus on the quarantined ship. Two crew members, out of total 138 Indians on board the cruise ship Diamond Princess, were tested positive for the virus earlier.

Meanwhile, aviation regulator DGCA has asked airports and airlines on Friday that passengers arriving in flights from Japan and South Korea must be screened once they step out of aerobridges in order to prevent the spread of novel coronavirus infection.  Till date, only passengers arriving from four countries — China, Hong Kong, Thailand and Singapore — were being screened for possible exposure to the virus at 21 identified airports.

In a circular, the directorate general of civil aviation (DGCA) was quoted by news agencies, as stating, “Universal screening of all the passengers coming in flights directly from Japan, South Korea, Thailand and Singapore besides the flights from China and Hong Kong shall be ensured immediately once they step out of the specific identified aerobridge.” The DGCA circular was further quoted as stating,  “It is advised to place the suitable signages at strategic locations at all the airports and getting the self-declaration form filled by the passengers as per the instructions of the Ministry of Health and Family Welfare.”

DGCA also stated on Friday, “All airlines shall make in-flight announcement in the flights coming directly from these countries and ensure strict compliance.” It noted that these steps are being taken to prevent the spread of COVID-19 in India.

So far, India has reported three confirmed cases of nCoV, all from Kerala. Three medical students of the Wuhan University, all residents of Kerala, who returned to India on their own recently and self-reported at a hospital in the state tested positive for the respiratory virus, named COVID-19. One of them has been discharged after recovery.