The Portuguese President is on a state visit to India from February 13-16 on the invitation of President Ram Nath Kovind. 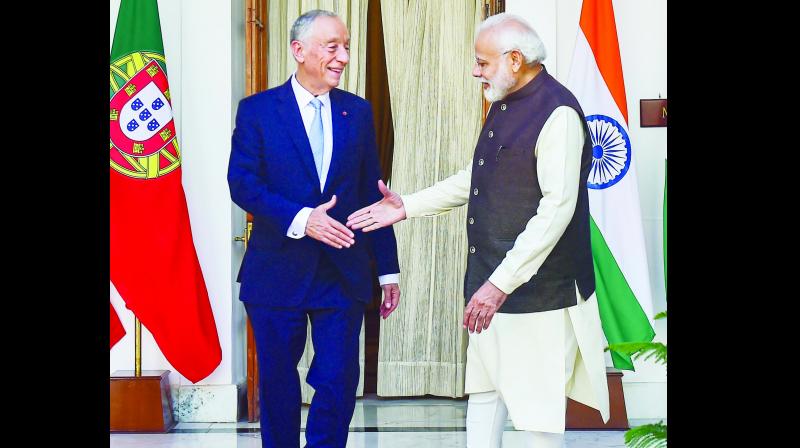 Seven other Memoranda of Understanding (MoUs) were announced between Indian and Portuguese entities including in the field of production of drones, aeronautics, nano-biotechnology, start-ups for women entrepreneurs and yoga.

The Portuguese Presid-ent is on a state visit to India from February 13-16 on the invitation of President Ram Nath Kovind.

The Portuguese President held delegation level talks with Mr Modi at Hyderabad House in the capital. He will also travel to the states of Maharashtra and Goa on Saturday and Sunday.

The pacts signed were “Memorandum of Under-standing for Cooperation for Setting Up a National Maritime Museum Heri-tage Complex in Lothal (Gujarat) between the Portuguese ministry of defence and Indian ministry of shipping, MOU between Economic and Food Safety Authority (ASAE) and DPIIT, ministry of commerce or co-operation in the field of industrial and intellectual property rights, agreement on Audio-Visual Co-production between India and Portugal, MoU bet-ween Portuguese Diplom-atic Institute and Foreign Service Institute for trai-ning, Co-operation Agre-ement on Maritime Tran-sport and Port Develop-ment between India and Portugal, Joint Declar-ation on India and Portu-gal Mobility Partnership, and MOU between Invest India and Start-Up Portugal.

Other pacts announced were “MOU between Inst-itute for Defence Studies and Analyses (IDSA) and Institute of Social and Political Sciences of the University of Lisbon for co-operation in strategic and security areas.

MoU between We-Hub Telanga-na and PARKURBIS Covilha for Exchange of Women Start-up Entrepreneurs, MOU between The National Institute for Interdisciplinary Science and Technology (CSIR-NIIST), Thiruvananthapuram and Instituto Superior Técnico (IST), Portugal, for collaboration in higher sciences, MOU between TERI-DEAKIN Centre, Gurugram and International Iberian Nanotechnology Laboratory (INL) Braga for co-operation in Nano-biotechnology, MOU between Hindustan Aeronautics Ltd. and CEiiA in aeronautics, MOU between VEDA Defence and UA Vision for production of drones and an MOU between VYASA, Bangalore and Portuguese Yoga Confederation for collaboration in a Scientific Validation project on the benefits of Yoga for Portuguese schoolchildren.