It said that Honeypreet was aware of the activities of the sect and the violence unleashed by its followers. 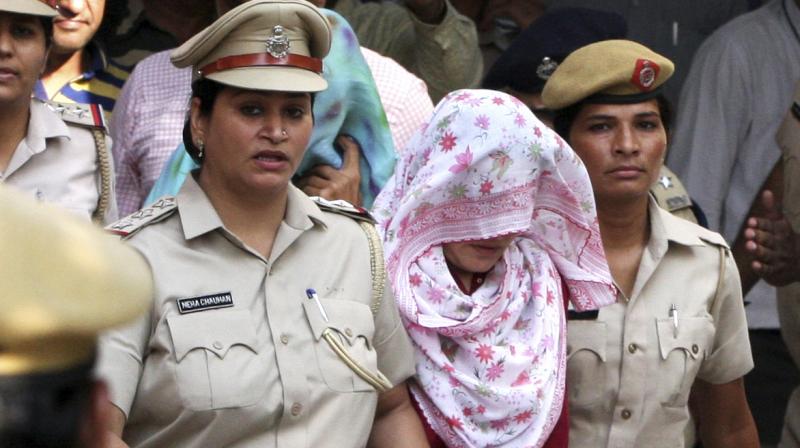 Honeypreet Insan (head covered with scarf) leaves after being produced in a court in Panchkula. (Photo: AP)

Chandigarh: A Panchkula court on Wednesday sent Honeypreet Insan to six-day police remand. The Haryana police produced Honeypreet in the court and had sought her 14-day remand to probe her role in the conspiracy to incite violence in Panchkula on August 25. It said that Honeypreet was aware of the activities of the sect and the violence unleashed by its followers.

Honeypreet has been charged under Sections 151 (knowingly joining or continuing in assembly of five or more persons after it has been commanded to disperse), 152 (assaulting or obstructing public servant when suppressing riot, etc), 153 (wantonly giving provocation with intent to cause riot), 120B (criminal conspiracy) and 121B (waging or attempting wage war against Govt of India) in connection with the deadly violence which followed the Gurmeet’s conviction on 25 August and is seeking remand for further investigation.

Heavy deployment of Haryana police and Central Reserve Police Force (CRPF) was witnessed around the court premises and the aisle was kept clear of vehicles. The movement of people was restricted inside the premises as precautionary measure in view of the violence on August 25 following Ram Rahim Singh’s conviction for rape.

It is worth mentioning that Honeypreet along with Jagdeep was arrested from Zirakpur-Patiala road on Tuesday. She complained of chest pain on Tuesday night and was taken to a hospital where she was found to be fine by doctors.

Meanwhile, the police conducted medical examination of Honeypreet and other woman, Sukhpreet Kaur, at General Hospital in Panchkula at around 2 am on Wednesday.

Honeypreet, the adopted daughter of Dera Sacha Sauda chief Gurmeet Ram Rahim Singh, and Sukhpreet were brought for medical examination in a private vehicle. They were both later taken to Chandimandir police station in the same vehicle.

Honeypreet was questioned by the SIT officials and women police officials for several hours after her medical examination at the Chandimandir police station.

Honeypreet also complained of migraine on Tuesday night. She was given medical treatment before her medical examination.