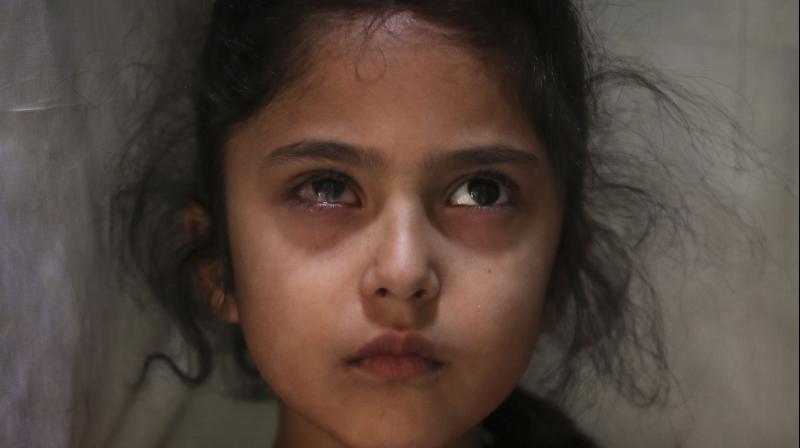 Six-year-old Muneefa Nazir, a Kashmiri girl whose right eye was hit by a marble ball shot allegedly by Indian paramilitary soldiers on August 12, 2019. This image was part of a series of photographs by Associated Press photographers which won the 2020 Pulitzer Prize for Feature Photography. (AP/Mukhtar Khan)

Srinagar: Three photojournalists from Jammu & Kashmir have been awarded the 2020 Pulitzer Prize for their striking images of life in the valley. Channi Anand, Mukhtar Khan and Dar Yasin of the Associated Press won the coveted prize in the feature photography category.

The announcement of the award gave cause for elation in the media fraternity in Jammu & Kashmir about two weeks after the police’s seemingly gratuitous actions against three of its members.

Dar Yasin, Mukhtar Khan and Channi Anand have been honoured for work reflecting life in Jammu and Kashmir during the crackdown and communication blackout that followed the central government contentious move of stripping the state of its special constitutional status and splitting it up into two union territories in August last year.

“This recognition for our colleagues has come at a time when Kashmiri journalists are facing intimidation by the state. Also, there are road blocks in the day-to-day functioning of journalists. This award is that rare good news that provides Kashmiri journalists an opportunity to celebrate their own existence. It is sort of a reassurance that good work is eventually noticed,” said senior journalist Muzamil Jaleel.

While the curfew restrictions and other official curbs pushed almost the entire population of the erstwhile state indoors, media persons were caught in a more complex situation. With all means of communication closed and curbs clamped on their own movement, journalists were handicapped in reaching out to their readers, listeners or viewers.

However, Dar Yasin, Mukhtar Khan and Channi Anand found ways to let outsiders see what was happening in the territory. As has been reported by their employer Associated Press (AP), an American news agency headquartered in New York City, the trio after “snaking around roadblocks, sometimes taking cover in strangers’ homes and hiding cameras in vegetable bags” captured images of protests, police and paramilitary action and daily life — and then headed to the airport to persuade travellers to carry the photo files out with them and get them to the AP’s office in New Delhi.

The news agency said they have been awarded for their “extraordinary photojournalism of the crisis and military lockdown in Indian-controlled Kashmir”.

The highly acclaimed Pulitzer Prize was established in 1917 by provisions in the will of newspaper publisher Joseph Pulitzer. It is administered by Columbia University. This  is the first time that anyone in Jammu and Kashmir has bagged it.

The three photojournalists were barred from speaking to the outside media by AP. However, as quoted by the news agency, Yasin said about the work he did post-August: “It was always cat-and-mouse. These things made us more determined than ever to never be silenced.”

He later tweeted, “Thank you, colleagues, friends, brothers. I would just like to say thank you for standing by us always. It’s an honour and a privilege beyond any we could have ever imagined. It’s overwhelming to receive this honour.”

Mukthar Khan said he never imagined he would get a Pulitzer in his lifetime. “It is a great honour, unimaginable though. I could never have imagined getting it in my lifetime. Since it has come, I must say it couldn’t have been possible without the support I received all through my career from my family -- both at home and AP.”

Channi Anand was quoted by the news agency as saying, “I was shocked and could not believe it”.  AP president and CEO Gary Pruitt said, “This honour continues AP’s great tradition of award-winning photography."

Congratulatory messages poured in for the three photojournalists with many people taking to social media platforms to express their warm pleasure over their winning this year’s Pulitzer.

Congress leader Rajiv Gandhi tweeted, “Congratulations to Indian photojournalists Dar Yasin, Mukhtar Khan and Channi Anand for winning a Pulitzer Prize for their powerful images of life in Jammu & Kashmir. You make us all proud.”

Former J&K chief minister and National Conference leader Omar Abdullah wrote on the microblogging site “It's been a difficult year for journalists in Kashmir & that's saying something considering the last 30 years haven't exactly been easy. Congratulations to @daryasin, @muukhtark_khan & @channiap on this prestigious award. More power to your cameras."

Among those who rejoiced in the award were members of the media fraternity based in the twin capitals of J&K. “Kashmiris are rejoicing today. A very good news coming after a very long time. Many congratulations, Mukhtar Khan, Dar Yasin and Channi Anand. Kashmir is proud of you,” tweeted Vijdan Mohammad Kawoosa, a data Journalist at a national newspaper.

Indian Express deputy editor Muzamil  Jaleel said, “This is one of the biggest awards conferred on journalists in recognition of their exemplary professional work. Our entire Kashmiri journalist fraternity is delighted that our colleagues have received such an honour.”

Speaking to this newspaper, he said, “It is a rare feat that was achieved despite extremely difficult circumstances to function as a journalist. This international award to our colleagues is in a way a testament to the professional capability and commitment towards the highest standards of journalism of Kashmiri journalists.”

However, the award also drew criticism from some sections. The Twitter handle @HinduAmericans, reacting to the Pulitzer Prize announcement, said, “I respect the Pulitzer Prize Committee and AP, but you messed up on this one. These photos seem to promote violence, lies, and terrorism against civilians. These photographers may be not ethical and may be paid agents. Have you investigated their work and who helps them?”

Aarti Tickoo Singh, a Kashmiri Pandit who serves as foreign and strategic sffairs editor at India Abroad News (IANS) tweeted, implying that commensurate media attention and plaudits were not given to the plight of victims of Pakistan-sponsored terrorism in Kashmir.