Singing to her own tune

A force to reckon with, lyricist, playback singer and music composer Gowry Lekshmi is making waves with her music. 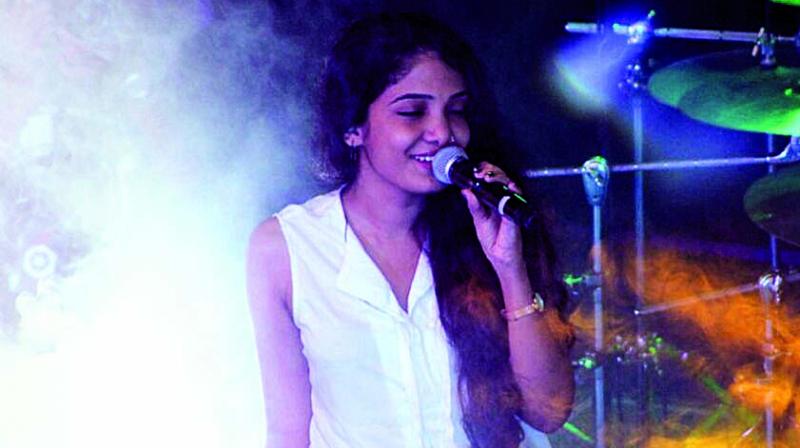 Starting to learn music from the age of three, Gowry turned music director at the age of 13 for the Mohanlal movie, Casanovva.

Gowry Lekshmi’s big break came about when she sang the soulful rendition of Aaro Nenjil from the Malayalam movie Godha. “I got lots of fans and followers because of this one song,” smiles the crooner. “It’s every musician’s dream to get recognition for their work, and I’m glad it happened in my career too.”

Starting to learn music from the age of three, Gowry turned music director at the age of 13 for the Mohanlal movie, Casanovva. “My own composition Sakhiye was chosen by the film’s director Rosshan Andrrews,” she smiles. “This entry to film music brought me fame and recognition. When I made my debut as a composer, I was too young to understand how big it is or how lucky I am to be a part of the industry. I got a lot of media coverage because of my age. I was also the youngest female music director and lyricist back then.”

Gowry reveals that she started off by learning Carnatic music, when she was three. “My music gurus are S.K. Suma, Vaikom Vasudevan Namboothiri, Maruthorvattom Unnikrishnan, Chengotta Harihara Subrahmanian and Syamala Venkataramani.  Later, when I was in the 11th grade, I started learning Hindustani under the tutelage of Fayaz Khan and Vijay Sursen. I started learning Western classical under Augustine Paul at the age of 17,” she lists.

The singer, from Cherthala, a quaint village in Alappuzha, made her debut as a playback singer for music director Prasanth Pillai for the movie Ezhu Sundara Rathrikal, followed by the song Kalam Padunne for Rex Vijayan for the film Lord Livingstone 7000 Kandi.  The youngster’s USP has always been the fact that she’s a composer and lyricist. “Writing and composing my own tunes is the greatest happiness in my life. Performing to my songs live and witnessing the audience loving and cheering after the songs give me an adrenaline high!” exclaims Gowry.

On being asked about her inspiration behind penning lyrics, she says, “My songs are mostly about staying in touch with nature, being hopeful and, of course, from my own experiences. I believe my songs have so much of soul in them — that’s because all those songs are from real incidents and feelings.”

Gowry, who has performed on many stages in India and abroad, never plans a particular genre while writing or composing. “I don’t fix a genre first and then compose the song. But if you ask me, I love soul, RnB, contemporary folk and world music,” she says.

The indie music scene in India is undergoing a major change, in terms of new musicians, bands, collaboration and the type of songs. “This change is definitely giving so much of hope and happiness. We want more people to start exploring indie music. I certainly think indie is going to be huge in the near future,” Gowry smiles.

Like any other singer/songwriter, Gowry gushes that she would love to collaborate with the likes of Coldplay, Lianne La Havas and Mutemath.

As she bids adieu, the singer reveals her future plans. “More music, more venues and bigger audience… I want to keep on releasing a lot of music, travel the world and perform and create a wider space for indie music,” she concludes.