A journey of reinvention

Driving With Selvi, based on the inspiring true story of Selvi, the first South Indian female taxi driver, is going places now 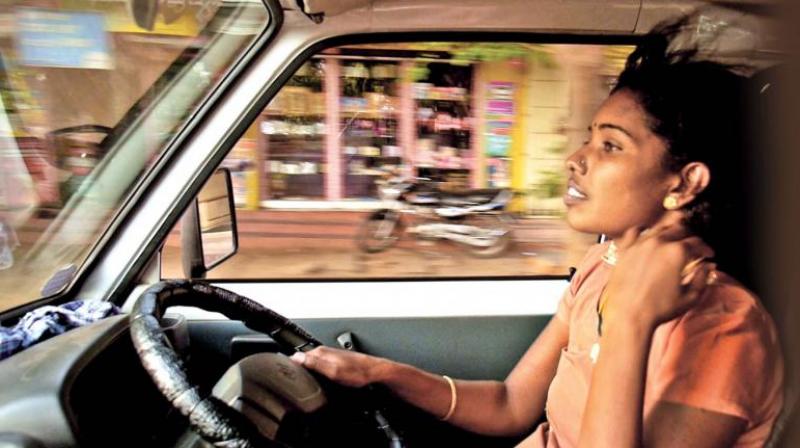 When Elisa came to me, I was nervous and a little suspicious. I couldn’t understand why she would want to make a film about a girl, who was just a driver. But with time, I felt more comfortable and I began to understand the bigger picture,” says Selvi, the protagonist of the acclaimed documentary Driving with Selvi. This multi-lingual project is about south India’s first female taxi driver named Selvi, who had previously escaped a child marriage. In an interactive chat with DC, film’s director Elisa and main character Selvi open up about their journey.

The film, directed by Canadian filmmaker Elisa Paloschi, is the 10-year journey of a courageous young woman, who defied all expectations and moved beyond the pain she’s experienced to create a new life.

Elisa reminisces, “I met Selvi in 2004 when I came to India as a tourist. She was living in a shelter called Odanadi, an organisation dedicated to rehabilitating people affected by human trafficking in Mysore. She was learning to drive a car and become a professional taxi driver. I was totally impressed by her story and decided to make a film on her. When I approached her, she was reluctant and questioned me why am I making a film on her. But later, I was able to convince her and she realised that her story could change the life of many women in the world.”

The film talks about Selvi’s personal transformation and coming to terms with who she is and finding a place for herself in society. “It’s a coming-of-age film — her transformation is something spectacular. After four years into the shooting, I noticed her transformation. I believe that her story will make an impact on girls from several communities,” adds Elisa.

Selvi, who owns a taxi company, says that the film supported her personal growth and helped to gain confidence. “My life gained a purpose knowing that my story would reach girls like myself. When I grew up, I had nobody, but I hope I can now be a role model to girls.”

Selvi, like many girls in India, was a child bride in a violent marriage. One day, in deep despair, she chose to escape, going to a highway with the intention of throwing herself under the wheels of a bus. Instead, she got on the bus, choosing to live and went on to become south India’s first female taxi driver.

Explaining about the shooting process, Selvi says, “I was new to all of this. Elisa just followed me and captured my daily chores, work and family life. She was just there, quietly doing her work. There were days when no shooting would happen depending on my moods and daily routine. I have no idea how Elisa managed me for 10 years! She has become an integral part of my life,” Selvi smiles.

Speaking about the challenges, Elisa says that the prominent ones were maintaining the focus and enthusiasm and understanding the importance of continuing this project. “The entire process required a lot of patience as it took us 10 long years to shoot her journey. Yet another challenge was raising funds. We raised the money through crowdfunding and campaigns.” Over the course of years, both the director and actor have developed an interesting relationship. “Her life has inspired me and made me a better person. We are really close. Sometimes, it is like a mother-daughter bond and sometimes, she is like a dear sibling,” says Elisa

Currently, the makers of the film are doing an outreach campaign across the country and touring India in a bus with a projector and a screen. “We are screening the film in tribal communities and schools in remote areas. Through this, we facilitate dialogue and inspire young women to dream big. Meeting various young women across the country is interesting — listening to their stories and giving them hope gives us a better understanding of our lives,” she adds. The film has been dubbed in several languages including Swahili, Arabic and Spanish.