Heroes are not guys with huge muscles, says John Abraham 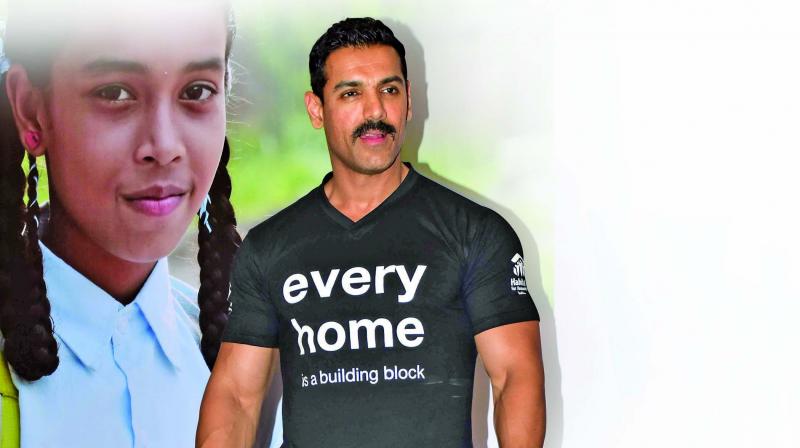 It is no secret that the muscled actor will be sporting a bristling moustache in his upcoming film, Batla House, in which he will be playing decorated cop, DCP Sanjeev Kumar Yadav. The film, directed by Nikkhil Advani is being shot at blitzkrieg speed, with only one big schedule left to conquer before it is ready for release. Since it is based on the actual Batla House encounter case that took place in 2008, the actor has taken extra care to look the part. Compliment him for his stout moustache that gives him an edgier look from his otherwise boy-next-door image and he quips, “Thank you for saying that I look sexy. However, everybody looking at my moustache feels scared and they feel I will arrest them as I look like a cop.”

While the actor is excited about this film, is also working on his next film Romeo Akbar Walter (RAW), in which he is rumoured to play eight different roles. When asked if this is true, the actor chooses to refrain from divulging too much information. He says, “Raw is going forward in a fantastic manner, but there’s still time, it will be out only in April.”

John has also found himself busy promoting a social cause that’s close to his heart and one that he has been asscoiated with for over a decade.  The actor has been a part of the NGO, Habitat For Humanity for the last 12 years, which works towards providing homes to the lesser privileged and building proper sanitation systems for them. India’s housing crisis is conspicuous through its pavements and streets where people can be found living under bridges, train tracks, highways and even crammed in crowded slums. No matter what financial background we come from, all human beings deserve to live under the roof of a home.

At a recent meet-and-greet session, the actor was all praise for the painstaking effort of school children involved in the ‘Rupee for Change’ initiative of the NGO. Though the actor is known for playing the tough and resilient hero in most of his films like Force 2, Parmanu and Satyameva Jayate, he tells us who he thinks the real heroes are. Referring to these children,  who have managed to collect huge funds for the cause, he says, “They have  collected over five crore rupees and built four lakh homes already, but we want to build more homes for the poor. I ask everyone to support any cause that helps the society to grow,” he urged and adds, “Heroes are not guys with huge muscles. These students are the real heroes.”           The initiative calls on students from different schools to lend their support to the cause of building homes and sanitation units for low-income families in different parts of the country. This not only gives students an opportunity to do something for the community, but also internalises the values of social contribution, compassion, and generosity among them.

The actor was introduced to Habitat through a school friend over a decade ago when he built his first house in Lonavala in the year 2005. Since then, the actor has helped build over 100 homes across the country and believes that, “homeless people do not want money but support from people to uplift themselves.”

John stresses that this initiative is more important to him than any film premiere he’s ever been to as it carries more power to enforce change. With around 56 million homeless people in the country today, it is impossible to turn a deaf ear to the cries for help. He says, “We have to make homes for the homeless. Building sanitation facilities for them too is of utmost importance. So many people do not have a toilet to go to, they do not have a proper place to have showers,” he rues.

John also wants his fellow Bollywood stars to join this movement and hopes they would come forward saying, “They are very nice people. Such good causes happen through  agents and it happens through people like us.”