Chennai, Kochi and Surat are among the world’s top 20 cities will be flooded dangerously. 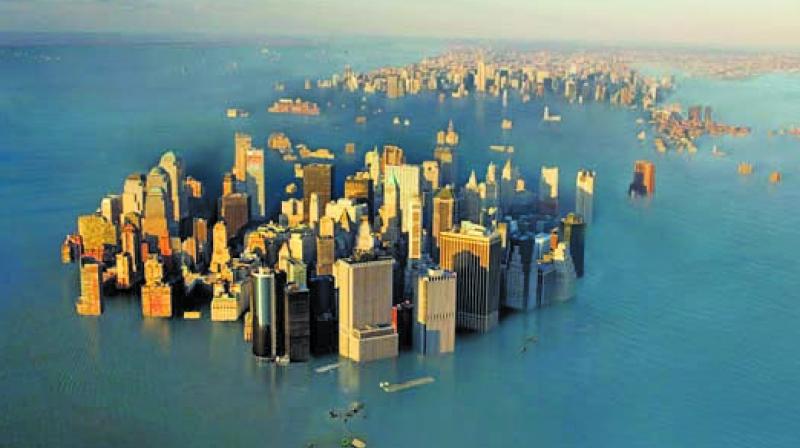 The sea rises as temperatures spike and polar ice melts. The fear is that many refuse to see the catastrophe till it strikes. Chennai, Kochi and Surat are among the world’s top 20 cities will be flooded dangerously

India awaits an impending coastal disaster which is set to throw off balance human habitations and the nature of economic activity on her long coastline. While state governments have to stay vigilant, prepared and ground-connected, national governance structures such as the National Disaster Management Authority under the Ministry of Home Affairs (MHA) and the Climate Change Division of the Ministry of Environment Forest and Climate Change should be working together beyond the demands of the Disaster Management Act of 2005.

The projections on the sea level rise due to human activity and climate change may drastically hit Indian coastal cities and sink many rich deltas and life-giving ecosystems. The situation cannot be ignored. Many climate change studies since the Intergovernmental Panel on Climate Change 2014 have laid out bare facts on increasing vulnerability of coastal states around the world but indicated that the situation would be unavoidably precarious in India, Bangladesh to the Southeast Asian coastline towards China.

India’s coastal population has been steadily rising in the last decade. In the last decade it has exploded in numbers to around 600 million and also a relatively very high density per square km. The six most vulnerable states are West Bengal, Odisha, Kerala, Andhra Pradesh, Tamil Nadu and Maharashtra.

Vulnerability is found to be higher not just due to the climate change-related projections on sea level rise and high density of population but more due to lack of professional preparedness as a routine task of governance in these states. India has vital reasons to focus on preparedness in disaster management due to its extremely high coastal vulnerability.

The floods in Kerala may just be a prelude to many more challenges to strike the state-level disaster management infrastructure.

Sea Level Rise in 6 years
In the past 100 years, the Global Mean Sea Level has risen by 10 to 20 cm. The annual rate of rise over the past 20 years has been 3.2 mm, which is twice the average rate of the preceding 80 years. The trend could threaten habitations across the country’s coastline. This would increase flooding from 300 per cent to almost 900 per cent and will severely affect almost 600 million population of nine coastal states, two Union Territories and two island states in India. Out of the 10 most vulnerable cities in the world, India’s Mumbai and Kolkata occupy the second and third ranks after China’s Guangzhao. The subsistence living on the one hand and ostentatious display of wealth and careless tourism on the other generate a social deficit which should also find a role in preparedness measures by state governments.

Of the world’s top 20 cities to be flooded most dangerously, three are Indian cities — Chennai, Kochi and Surat. In Kochi the sea is rising faster than in the other coastal cities but the southern part of the East Coast, where tidal ranges are low leading to high sedimentation and tougher wind generated waves, the inundation is relatively faster. The Diamond Harbour of Kol-kata, where the sea level rose by 5.7 mm in the last 14 years, is almost a symptom of the sinking delta. Similarly, but in lesser proportions, projections for Kochi, which has a high backwater presence, and Vembanad paddy area with a lower elevation, indicate severe loss of drinking water and vulnerability of life and livelihood due to ingress of salt water. The rise in sea levels has affected some fragile regions, making them highly vulnerable. On the eastern coast, the Ganga-Brahmaputra delta region is most vulnerable due to lower elevation combined with higher tidal influence. Further down, below the region, around the progressive cities of Visakhapatnam, Bhubaneshwar, Chennai and Nagapattinam, stronger sea level rise may cause severe erosion, loss of land and send more ecological refugees to the country’s mainland areas. Also, the land along the Andhra Pradesh and Tamil Nadu coasts, which is the catchment area of the Cauvery, Krishna and Godavari rivers has alluvial plains, bays, creeks, ridges, bars, mangrove swamps, marshes and lagoons. This area, as providentially declared by ecologist Madhav Gadgil should not be touched and any interference in this ecology is likely to incite disasters of an unforeseen nature.

the economic damage
A World Bank Report of 2015 suggests that global flood losses in 2005 were estimated at $6 billion per year. This is projected to cross $1 trillion per year if climate change, subsidence and basic adaptation investments are taken into account.

Most of India’s coastline is fertile and has rich paddy cultivation but is highly vulnerable to onshore oil exploration, tourist activities and thoughtless infrastructural expansion. If coastal preparedness is ignored, the country may face a severe food crisis as well. The fisher folk around the coast are already thrown off balance in their fish catch.

The data from the Central Marine Fisheries Institute only shows a rise in the number of small fish whereas the bigger and more expensive fish catch of Alappuzha coastline has been lost in the last decade and a half. Most of the fishing communities on the coastline from Alappuzha to Panjim in Goa lamented that their favourite fish are no more seen even when they traverse the interiors of the sea.

None of these communities are anyway optimistic about their children endangering their lives in the lost and dying occupation of catching these leftover small fish in the sea.

The scenario is worsening with many industries being set up without proper environment impact assessment. This kind of activity has led to an increase in greenhouse gases, especially methane, which has precipitously increased ocean acidification, knocking off marine food chain and fish catch. Coral bleaching due to acidification further weakens the livelihood of millions living on the coasts. There are two main activities which need urgent attention. First is the destruction of mangroves on coastlines and plankton on the bed of the ocean. Plankton is green plants and weeds on the ocean bed and also floating in the form of photo and zooplanktons which fight greenhouse damage to life to the extent of more than 40 per cent.

Second is the phenomenal growth of modern slaughterhouses which generate phenomenal greenhouse gases. Just by being vegetarian one can contain more than one fourth of CFCs in the atmosphere. Yet, physical exposure to an economic activity of this nature and proportion would need massive institutional and policy changes which most states may not be prepared to undertake. Yet the national government may have to take a call on this subtle direction and gentle diversion to a new way of thinking and progressing in a world where we may not get a Noah’s Ark to save our transition to another world. What good would this new world be which may not have many of those we walked with in the leisurely gardens of Arcadian bliss free of greed and bloodshed.

(The author is Professor of Law & Governance, Chairperson,Special Centre for Disaster Research, JNU)