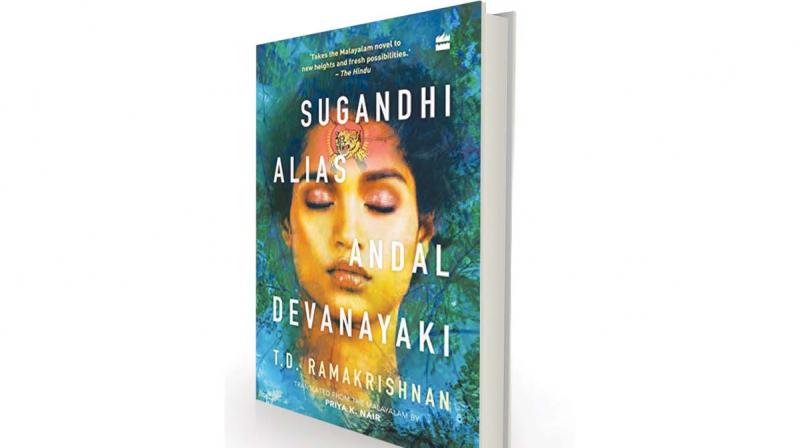 In the present times of postmodernism, individualism and “auto-modernity”, another trend is slowly raising its head — “fascist ideology”. But there are many faces of fascism, not limited to political forces only but enveloping everyday life as well, challenging the very basic notions of “gender”, “identity”, “boundary” and, of course, “freedom”.

T.D. Ramakrishnan, the author of Sugandhi Alias Andal Devanayaki, a recipient of the Kerala Sahitya Akademi Award and Vayalar Award, is known for his unique narrative style of blending history and myth while presenting contemporary political and social life. With the use of multiple perspectives, he has tried to present the Eelam movement in Sri Lanka, mixing it with the myth of Devanayaki, as is wont.

This political novel, a postmodern narrative of a revolutionary movement, is inspired from a poem, Andal by Satchidanandan. Using the technique of “magic realism”, the author has mixed reality with meta-reality and presented the period of struggle for Tamil Eelam in Sri Lanka and its aftermath.

Peter Jeevanandam, a member of a Hollywood movie production team, is out on a mission to write a script for a movie, “The Woman Behind the Fall of the Tigers”, but secretly he is also searching for Sugandhi who was not only an LTTE member but the only true love of his life as well.

Based on a true event and life history of Rajini Thiranagama, a Sri Lankan human rights activist allegedly gunned down by LTTE, a number of historical and political events unfold in the novel and it poses questions related to the motives of such revolutionary movements, political forces, the government and peace keeping forces.

Two stories run together — one of history portrayed by Rajini and Sugandhi and another of Devanayaki, a mythological character.

Rajini Thiranagama, inspired by her elder sister, Nirmala, who was a member of LTTE, had initially supported the cause of the Iyakkam but, disillusioned by its lack of freedom and democracy, she had raised her voice against it. She even criticised the government and IPKF. In her book, The Broken Paimyra, she writes: “Men in battle garb, whether they come with swords or guns, on a horse or in armed cars, the price of conquest seems heightened by the violation of women.” The Iyakkam promoted a patriarchal power structure and viewed all feminists as bad elements. This exploitation was not limited to the Iyakkam and it was not a case of devil and the deep blue sea, rather the country was caught between two devils. Rajini was the prey of both the government and the Iyakkam. So is Sugandhi. In the modern age of patriarchy, pregnancy was regarded as the first stage of punishment and it was the duty of men to “punish women suffering from diseases like human rights or feminism”.

The violation of women seems to be an integral part of every social system since time immemorial. Devanayaki, heroine of a story set in AD 992, who wanted nirvana through happiness, had studied Kautilya’s Arthashastra and other treatises on political science but she, like a majority of women, ended up being just a “body” in the hands of powerful men. She felt ashamed of herself when she realised that the king had not seen her knowledge or abilities but was merely attached to her physical beauty. In this patriarchal system, where chastity was (and still is) regarded as the best form of prayer for women, queens had to wear “chastity belts” and the keys remained in control of the king. Devanayaki, though “stained by sin” and adorned by a title, “Pattavesi” (whore), attained nirvana and became a part of the Arya Devi myth.

It is believed that Devanayaki will come to the rescue whenever the tears of a woman fall and she will take divine birth if the mind and body of any woman is hurt. T.D. Ramakrishnan suggests that Rajini Thiranagama and Sugandhi alias Andal Devanayaki were in fact reincarnations of Devanayaki. Like Devanayaki’s story, women fighters in the Iyakkam “exhibited the complex situation of female empowerment and misogynistic stances existing simultaneously”. Devanayaki symbolises resistance against the oppression of women.

The use of myth, memory and history also interrogates the complex modern world and its various dimensions. The power camps of every type and nature are just machines to repress and crush women. Wearing the mask of progress and development, fascist forces control the masses, reducing them to puppets. The author argues that “the ideology of fascism has been redefined and it comes in the guise of democracy or communism. It speaks of peace and development. It controls the corporate sector. Then, there is academic and intellectual fascism”.

The novel is basically an “aesthetic rebellion against fascist structures”, but the author seems to have lost track of the main idea of history. When you try to present too many ideas, there is bound to be confusion. There is a whirlpool of myth, history, ideology, innumerable references to Hitler, Gaddafi, Mubarak, Ashoka, Mahatma Gandhi, Rajiv Gandhi, Salman Khurshid, Che, V.P. Singh, Subhas Chandra Bose, S. Mostofi, Karunaratna Perera, Arundhati Roy, Orhan Pamuk, Noam Chomsky, Bob Marley, etc. and events ranging from Sinhalese myths to Nirbhaya case, acid attacks, child rape, majority versus minority, plight of the Muslims, nano weapons and what not. The reader literally drowns in this sea of events, people and expressions.

The novel is of 242 pages, out of which 115 pages are devoted to myth only. The style of both the portions is so different that it seems two people have written these two versions. The story of Eelam movement and of Rajini and Sugandhi simply fade away in front of Devanayaki. It is advisable to concentrate on the main course and remember that too much salt will make the meal bitter!