The monk who had sold a fortune

The fans soon switched back to football and there they stayed. The football final match was symbolic. 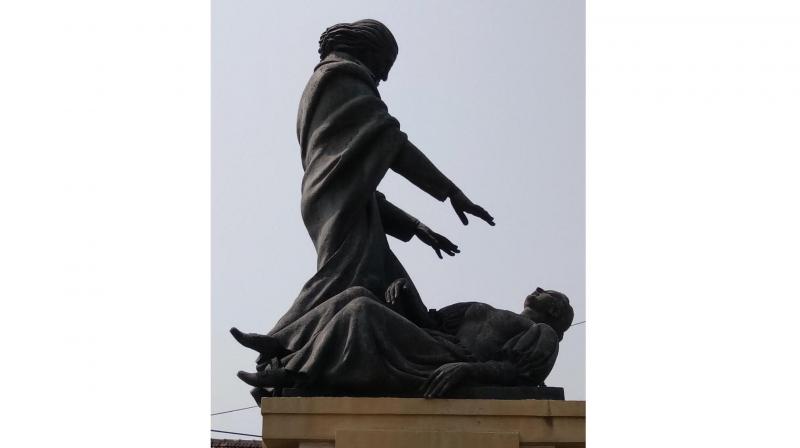 Statue of Abbé Faria hypnotising a woman in Panjim.

The last month has been a virtual bonanza for sports fans. The month long FIFA world cup finals kicked off in the middle of June and have just concluded. Interspersed between and after the  conclusion of the French Open tennis, has been two weeks of Wimbledon now in its 150th year, and the Indian cricket team's tour of Ireland and England. If we add Dipa Karmakar'a gold medal in gymnastics and Hima Das's prowess in the tracks events at the world athletics junior championships, the Indian viewer’s cup of viewing happiness is complete and sometimes the cup is overfull with  events competing with each other for attention.

People continuously kept switching television  channels and for good reason. Among all the sports events pride of place must be given to the FIFA world cup football finals.

Not to belittle the excitement of the other sporting events, the football world cup comes only once in  four years, and the interest and excitement it generates perhaps needs to be underscored more.  Sports writers covering the world cup football matches are driven to such lyrical passion that their description of a Lionel Messi or a Christiano Ronaldo on the field would make for fine literary  essays. Publishers and editors would do well to spot such writing talent and make them do a full- length book sometime.

Football is such a fast paced game that sometimes, the viewer being spoilt for choice switches  channels away from the match and then regrets it forever. For as they say, in football it takes only  forty seconds to score a goal and the disappointed viewer will rue forever the missed  crucial goal. The replay is not quite the same thing. The same held true for the finals between France and  Croatia on Sunday 15 July. While a few bravehearts would have begun with watching the  Wimbledon tennis finals at least in the early stages, it was soon realized that Djokovic was all over Anderson at least in the first two sets.

The fans soon switched back to football and there they stayed. The football final match was symbolic. France was the sole representative of an old order, Brazil, Germany, Argentina, Portugal and Spain had all been eliminated.

The young Croatia represented the new order, younger and more vibrant like Belgium, Switzerland, Japan and South Korea. In the end, Didier Deschamp's team, “Les Bleus” prevailed by a comprehensive margin in  match that had its  own twists and turns. In the run-up to the finals, the fans in a football crazy nation, at least in the states of Goa, Bengal, the north east and Kerala and others were asked to choose their “doosra country” the team that they were rooting for. Goa, now that Portugal was no longer in the reckoning, dug up a little known  historical connection. Travellers from what is now known as Croatia had come to Goa in the 16th  century. They settled in Gandaulim about 4 kilometres from old Goa. They had even built a church there, the church of Sao Braz alongside the Cumbarjua canal. Thanks to a Croatian indologist, Zdravka Matisic, who discovered the reference, the crumbling church of Sao Braz is now fully  restored and is a smaller version of the main church in Dubrovnik. France will be happy to know that it too shares a connection with Goa. This is a literary connection immortalised in a French classic, the subject of so many translations and film adaptations. This is The Count of Monte Christo by Alexander Dumas. In the book, Edmund Dantes is incarcerated in the infamous chateau d'If. Imprisoned unjustly and without any hope of escape, Dantes meets a fellow prisoner, the monk Abbe Faria, in an adjacent cell.

Laboriously removing bricks from the  adjacent wall, Dante is able to talk to Faria, who is very old and feeble.

Faria tells him many things  and among them about a buried treasure in the island of Monte Christo. Faria dies and one of the gripping scenes in the novel is Dantes concealing himself in the burial shroud meant for Faria. Dantes is cast out to sea. He escapes from the shroud, makes his way to the island to find the buried treasure and returns to the mainland and civilisation as the Count of Monte Christo to revenge himself on those who had betrayed him. Many may not know that Dumas had based his Abbe Faria on a real character, a Goan!

Faria was  born in Candolim, Bardez in 1756. His parents were Caetano Vittorino de Faria and Rosa Maria. Due to irreconcilable differences, Faria's parents separated with the consent of the church. His mother joined a convent and the father a seminary. Soon, Vittorino de Faria left for Lisbon along with his son, some say to avoid implication in a local uprising.

In Lisbon, the senior Faria was sponsored and helped by King Joseph of Portugal to study for a  doctorate in theology in Rome. Faria too accompanied his father to Rome to study for the priesthood. While in Rome, he shows such promise that he too received his doctorate. He dedicated his doctoral thesis to the then Portuguese Queen, Mary 1, and another thesis on the Holy Spirit to the Pope. The Pope was so impressed by Faria that he invited him to give a sermon at the Sistine Chapel. Faria returned to Lisbon with a glowing reference from the Pope.  Faria was now invited by Queen Mary to give a sermon before her and an august assembly. Seeing the dignitaries assembled and in  awe of the Queen, the young Faria is tongue-tied. Sensing his discomfiture, his father seated beneath the pulpit whispered to him in Konkani, “Hi sogli baji, kator re baji”  (“they are all vegetables, cut the vegetables”). Reassured, Faria delivers an eloquent sermon. This simple but symbolic auto- suggestion by his father was to mark a turning point. Filled with radical ideas and knowing it was dangerous to remain in Portugal, Faria left for France  in 1788, on the eve of the French Revolution. He became a leader of one of the French battalions  and there is a report that he took part in the siege of the Bastille. However, he did take part in the fall of the French Convention and became friends with Jacques de Chestenet, a disciple of Franz Anton Mesmer.  The subsequent meeting with Mesmer who was perfecting hypnotic techniques  was a pivotal point in his life. Faria was later arrested in Marseilles and imprisoned in the infamous Chateau d'If for over ten years

It is believed that Faria perfected his techniques of self-hypnotism during this long period in prison. On his release, he was appointed professor of philosophy at the University of France at Nimes and also a member of the medical society at Marseilles. How and where Dumas met Faria is  not known. But he knew about his imprisonment in the Chateau d'If. But Faria was disenchanted  with animal magnetism as a cause of hypnotism and sleep. He was more keen on self-suggestion as a hypnotic technique. He soon published a book On the Cause of Lucid Sleep in the Nature of Man and dedicated it to de Chestenet who had grown disillusioned with Mesmer. It’s reported that Mesmer lost a debate on hypnotism with Faria.  Faria died in 1819 before completing his four  volume study on hypnotism. A bronze statue in central Panjim showing Faria gesturing hypnotically to a woman was sculpted in1945. An authentic caricature is preserved in the National Library of Paris and both Lisbon and  Margao in Goa have roads named after him.