Demystifying Bitcoin to harness it for change

I wanted to write a book that would simplify and demystify these complex subjects for the lay person, says Rachna Singh. 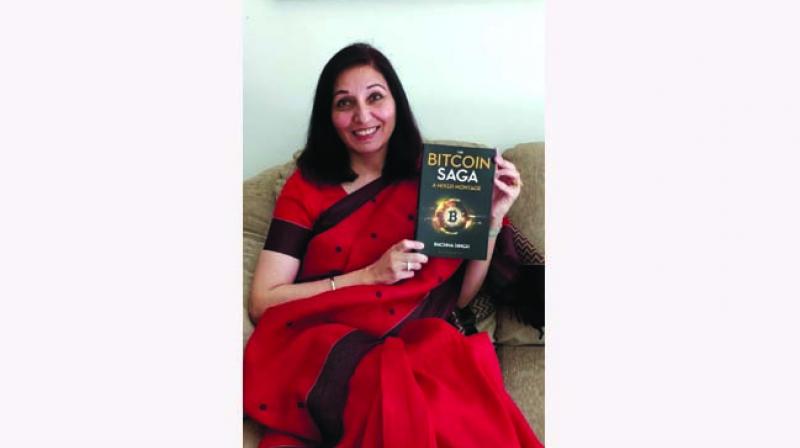 An MPhil in English, Singh joined the Indian Revenue Service in 1991.

Rachna Singh, a senior bureaucrat, has written The Bitcoin Saga: A Mixed Montage, a book on cryptocurrencies. She tells Rahul Chhabra that while this new, decentralised and immutable currency has its pros and cons, the power of the blockchain tech can be used to effect socio-economic change, if steered correctly.

What prompted you to pen a book on bitcoins?
The aim of my book is to narrate the true story (shorn of myths) about the genesis, growth and evolution of the bitcoin starting from the sub-prime crisis of 2008. The book is a balanced discussion on the positives as well as negatives of this decentralised and immutable currency, the regulations and tax policies in place globally to monitor the newbie currency and the enormous power of blockchain technology to change the world for the better if steered right. I wanted to write a book that would simplify and demystify these complex subjects for the lay person.

The bitcoin bubble burst in early 2018 with the bitcoin price plummeting as sharply as its meteoric rise. Will interest in bitcoins and other currencies of its ilk revive?
The bitcoin price hit a mindboggling $20,000 in December 2017. 2018 saw it loosing value by 75 per cent. But the April-June Quarter saw bitcoin breaching the $13,000 mark. Today (July 4), it is trading at $11,967 (`8,23,095). This increase can be attributed to increased institutional interest with CME Bitcoin futures hitting an unprecedented high of $1.7 billion in notional value on June 26. The impending bitcoin reward halving and launch of Facebook’s Libra coin also sparked interest.

Facebook has recently unveiled the Libra coin? How will it further the bitcoin revolution?
Central banks and regulators worldwide have reacted with panic and alarm to Libra’s impending launch.Congressional Democrats, have demanded the halt of Libra rollout. Central banks have expressed concern that Libra coin may become a tool for money laundering or terrorist funding. Clear-cut regulations are needed for the bitcoin revolution to be an instrument of positive socio-economic change rather than a tool of financial disruption.

Bitcoin has completed a decade. Where do you see it in the coming decade?
It is possible that bitcoins as we see today will be regulated out of existence. Countries and central banks are veering towards minting their own fiat cryptocurrency. Augustin Carstens, chief of Bank for International Settlements (BIS), acknowledged that central banks would in all likelihood mint their own cryptocurrencies. Canada on July 1, 2019, launched its own Canadian Stablecoin (CADT).

There is increasing adoption of blockchain technology across the globe. What are the areas of interest for common man, especially in India?
Blockchain technology has immense power to have a salutary impact on finance and banking segments as also governance, entertainment, healthcare, etc. Globally blockchain platforms are being used for the larger good of humanity. The Bitnation Refugee Emergency response (BRER) is a case in point. It was used to validate identification through a Blockchain emergency ID during the Europe Refugee crisis. In India, Andhra Pradesh is working on blockchain-based solutions for collating land records and streamlining vehicle registration. Whether it will be a benevolent Titan or a Frankenstein monster only time can tell.