A peek into Scotland’s heart

Sauntering into Edinburgh’s web of wynds and cobbled streets is like going back in time. 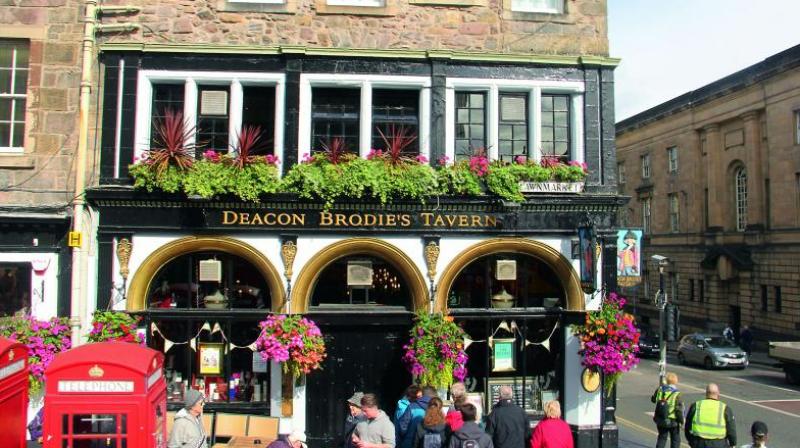 It’s a typical Edinburgh day… grey, windy and rainy. Occupying the raised plateau above the city, keeping the ancient tribes safe from invasion, the castle is perched on what was once an active volcano. This is the beginning of the so-called Royal mile that connects the castle to the Palace. It’s a holiday with a difference. A holiday where I want an insider view of the city I am visiting.  I am staying at an upscale and spacious Airbnb Luxe apartment in the heart of Edinburgh, Scotland, stocked with groceries and furnished with all creature comforts, which makes me feel like I am at home. I also decide to try the one-of-a-kind, immersive experiences offered by Airbnb from history walks, culinary experiences, to art tours with local experts.

I decide to take a guided walk of the Old town of Edinburgh offered as part of Airbnb experiences, led by local experts, who want to share their passion for the city with visitors. My guide is Gains Murdoch, who has a PhD in Scottish History. We start at the top of the hill near the Edinburgh Castle, one of the most defended hilltops, and the reason for the city’s existence.

Umbrellas in hand, we duck into Ramsay Garden, to find a stunning courtyard lined with castle-like apartments. In the late 19th century, many of the buildings on the Royal Mile had become slums where the poor lived and town planner Patrick Geddes came up with a plan to improve living conditions. He built Ramsay Gardens as a collection of spacious flats with a mix of Georgian and French styles with towers, turrets and balconies. Today many are rented holiday accommodation!

A warren of small alleys and passageways radiate like veins from the Royal Mile and lead down the hill. Some are called ‘closes’ as many of them led to private residences in the past and were locked by an iron gate and closed off to the public. Others are broad and wide called wynds. They are wide enough for a carriage and horse to pass through. Some alleys lead into an open courtyard and are called courts.

Many of the alleys are named after a prominent resident or their trade or profession. There is Deacon Brodie’s Close named after a notorious deacon, who is said to have inspired Robert Louis Stevenson to write Dr Jekyll and Mr Hyde.

By day he was a respectable man, by night he gambled, partied and to fund his flamboyant lifestyle would rob his wealthy clients. The last close is appropriately called ‘World’s end close’ as it’s the last close before the town hall!

“It was a time when the Old town was most crowded and the town had to grow vertically within the town walls,” explains Gains.

Every plot had a path that connected it to the road behind. But gradually as the town developed these became narrow alleys. We duck down through the narrow Fisher’s Close, where buildings tower around us, and we brush against the brick walls, so close to one another where the neighbours could link hands from windows. “This was like ancient Manhattan and these were probably the world’s first skyscrapers,” says Gains with a smile.

There was little sunshine, hence diseases like the plague spread in such an overcrowded environment.  “At one point there were almost 50,000 people living inside the medieval walls,” says Gains. Very often in the absence of sewer systems and indoor plumbing and a loud voice would call out ‘ Gardy loo’ a corruption of the French ‘Gardez L’eau’ (Mind the water) before flinging the contents of the chamber pot from the window!

The other end of the close leads to the photogenic Victoria terrace strung like a necklace over Victoria Street below, dotted with boutiques and antique shops with facades in candy colours, that is said to be the inspiration for Harry Potter’s Diagone Alley. I am fascinated by how the terrace looks like a tiered cake, with buildings built on the roof of the one below.

We descend the stairs to Grassmarket. It was also the place of executions of criminals, and many pubs that dot the Grassmarket today bear testimony to this fact. There is one pub called ‘The Last Drink’ where obviously the prisoners would have their last drink before their execution!  Outside Maggie Dickinson’s pub is a monument, which marks the gallows where more than 100 people were martyred in the 17th century.

History whispers from every corner of the town. We walk through the Candle maker’s Row lined with stone buildings to the Greyfriars Kirkyard, where many famous people of the city are buried, from William Smellie, the author of the first edition of the Encyclopedia Britannica, to poet Allan Ramsay. The medieval Flodden wall was built in the 1560s against a feared English invasion, and today a few fragments survive around the town, including one inside the Greyfriars graveyard, adorned with old tombstones.

The graveyard has the grave of Greyfriars Bobby, the faithful Skye terrier who is said to have remained beside the tomb of his master’s grave for more than 14 years till he himself died. Today a small statue of Bobby stands on the main road – the story becoming the material of a Disney movie as well as a book.

Gains tells us about the grave robbers of yore, who stole bodies from graves to meet the ever rising demand for cadavers, for dissection in medical colleges in Edinburgh, which was an important centres for anatomy in the 19th century. Two Edinburgh citizens called Burke and Hare went further and murdered as many as 16 unsuspecting locals, to provide bodies to noted doctor Robert Knox for his anatomy lectures! Gains shows us watchtowers that were built in cemeteries to watch out for grave robbers, as well as sturdy iron grilles that were fixed on top of graves to prevent robbers from reaching the bodies.

Close by is George Herriot’s School with its gorgeous Renaissance architecture. Today, it’s an exclusive private school for  tartan clad boys and girls. Many believe that the school was the inspiration for J K Rowling’s Hogwarts!

We slowly retrace our steps back towards the Royal Mile, stopping near St Giles Cathedral the main church of the town. On the cobbled lane under our feet is a heart shaped mosaic called the Heart of Midlothian that marks the position of the 15th century prison that once stood there. Gains opens two hip flasks with whiskey, and proposes a toast to end the walk. What better way than Scotch whiskey to toast the end of anything in Scotland!