Indian diaspora in Gulf are in no imminent danger

The US-Iranian tango is complex and unpredictable, given the long history of American interference in Iran. 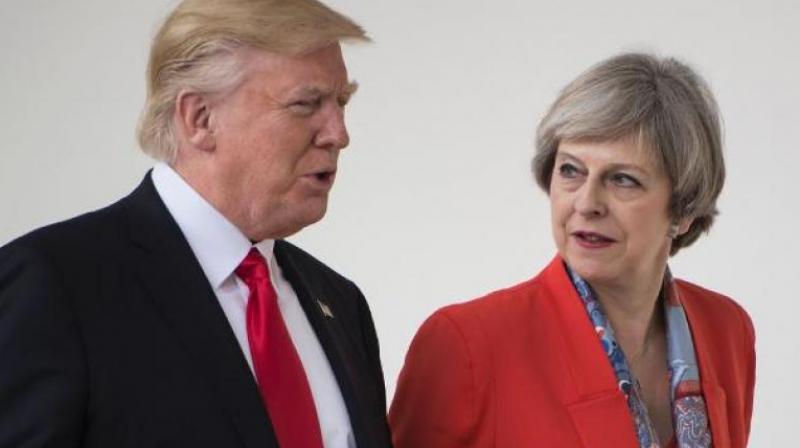 US President Donald Trump and British Prime Minister Theresa May.

Alarmist voices are aplenty that the Syrian conflict is morphing into World War III. But, in reality, the US-British-French missile strikes on Syria were prompted by domestic considerations rather than military, political or humanitarian considerations.

US President Donald Trump, British Prime Minister Theresa May and French President Emmanuel Macron — have been under immense political pressure in domestic politics and the three countries acted even before it could be established that there was actually a chemical attack in Douma. Russia was given advance notice of the attack knowing fully well that Moscow would alert Damascus,  which it did. Russia claims that 71 out of the 105 missiles were shot down. The missile attack created no new facts on the ground. The military victory of the Syrian regime is a foregone conclusion. Moscow plans to boost Syrian military capabilities to ward off any such future aggression. German chancellor Angela Merkel telephoned Russian President Vladimir Putin on April 17 to discuss Syria and plan a face-to-face meeting. Macron too plans to visit Moscow in May. Suffice to say, the Germany and France do not have an enemy image of Russia and are tamping down tensions. The bottom line is that neither the western world nor Moscow seeks a military confrontation.

Clearly, prognosis of World War III is preposterous. The Indian diaspora in the Gulf has no reason to feel threatened by a holocaust. Having said that, Middle East continues to be a powder keg. The Palestine issue remains unresolved and Iran’s rise as regional power is a new geopolitical reality that the Sunni Arab regimes (Saudi Arabia and the UAE, in particular) are yet to reconcile with. Equally, the West’s cultural, political, economic and military dominance of the Middle East for the last two centuries is ending even as the western retrenchment coincides with Russia’s resurgence and the appearance of a new player on the horizon — China. Such historical transitions are bound to create turbulence. Finally, Israel’s military superiority in the Middle East is increasingly becoming irrelevant as “hybrid wars” replace conventional wars — Syria, Yemen, Iraq, for example — and consequently, the strategic balance remains shaken until a new equilibrium is reached.

Quite obviously, the Middle East crisis vitally affects regional security. But the 7-year conflict in Syria has not affected the security of the Indian community in the Gulf so far and it is unlikely to be any different in the period ahead. Simply put, none of the external powers involved in Syria — US, France, Russia, Iran Turkey, Saudi Arabia, etc. — can afford to disrupt the world oil market, since they are all “stakeholders” in energy security one way or another. Similarly, the conflict in Iraq or the insurgencies in Egypt’s Sinai and in Libya do not impact the security of the Gulf. The spectre of Islamic State no longer haunts the region, either. The conflict in Yemen may have a spillover, but the red line is whether Saudi Arabia gets destabilised, which is a far-fetched scenario as things stand.

If the simmering tensions between Qatar and Saudi Arabia lead to a conflict, Indian communities in the Gulf could get caught in the crossfire. But such a conflict can be virtually ruled out. The point is, the US Central Command is headquartered in Doha and Washington will not allow a flashpoint to arise. Nor is any outside party queering the pitch for an outbreak of hostility between Saudi Arabia and Qatar.

In the final analysis, a major threat to the stability and security of the Gulf region, where millions of Indians live and work, arises only in the event of an attack on Iran by an external power, which would most certainly lead to Iranian retaliation. In principle, such an attack can come from the US or from a US-led coalition with its regional allies. But then, Iran’s military posture is riveted on developing deterrence against external aggression and Tehran has been successful in developing the military capability to inflict unaffordable costs on any aggressor — US and Israel included. Besides, the US is well aware that a conflict with Iran will inevitably assume regional overtones and impact international security and could have grave consequences for the stability of the world economy.

Finally, if President Donald Trump tears up the Iran nuclear deal of July 2015, it can lead to serious downstream consequences such as Iran resuming its nuclear program. And if that happens, the latent regional tensions that have accumulated over time would erupt with a ferocity that is beyond anyone’s control. May 12 is the deadline by which Trump is expected to announce his decision. But the good part is that the US’ European allies are happy with the pace and tempo of implementation of the Iran nuclear deal and Tehran too has no intentions of jettisoning the deal. Macron and Merkel are travelling to Washington (April 24 and 27 respectively) to persuade Trump not to take precipitate steps.

The US-Iranian tango is complex and unpredictable, given the long history of American interference in Iran.

What complicates it further is that Iran’s regional influence is steadily expanding and Israel and Saudi Arabia are pushing for a US-led containment strategy against Iran. The Gulf region’s security hinges on a new security architecture that includes Iran. However, that remains elusive.

(M.K. Bhadrakumar is a former ambassador.)