After inspiring Aamir Khan in Dhoom 3, Jackie to return as father in Salman’s Bharat?

Bindaas Bhidu, who is a cool dad to young superstar Tiger Shroff in real life, has been inspiring father on screen. 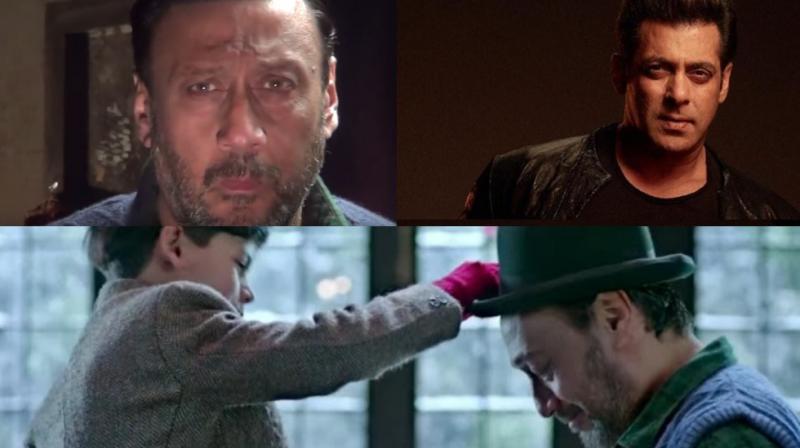 Bindaas Bhidu Jackie Shroff, who is playing the role of a cool dad to young superstar Tiger Shroff in real life, has been an inspiring father on screen too.

He played Aamir Khan’s father in ‘Dhoom: 3’ where before dying, he had asked his son to take over the responsibilities.

Taking the same role forward, it now looks like Jackie will once again guide Salman Khan on taking over the responsibility of the family before the dude goes for war.

A trade source confirmed to Bollywood Hungama, “The role of Salman’s father may not be a big one but it’s pivotal to the film and shapes Salman’s character and who he becomes later. It was Salman who wanted Jackie to play this powerful role. It starts in 1947 when the Partition takes place and thousands of families are separated and ends in 2000. The movie is the journey of a country and also a person, both of whom go by the name of Bharat. Ode To My Father begins with the Hungnam Evacuation in 1950 when many families got separated in Korea and the father tells his son Yoon Deok-soo, ‘If I don’t come you are the head of the family that means whatever happens you put the family first. Now, that you are the head of the family, look after them well.’ Jackie plays Salman’s father and his words remain with the young boy (Salman) right till the end. They get separated during the Partition in Bharat but his father’s words and desire to reunite with him remains right till the end.”

The source adds, “Like Ode To My Father, which spans over many years, Bharat’s story will span over a period of 50 years and that’s why we will see Salman Khan sporting five different looks in the movie – as a young boy who witnesses the Partition to the current years when he is an old man. As the firstborn, Bharat becomes his family’s breadwinner from an early age, doing all manner of odd jobs to support the family. The film begins from a modern day elderly couple (Salman and Priyanka) reminiscing about their past and how they fell in love and got married. So we will get to see a very young Priyanka Chopra and Salman Khan and old ones too. There are flashbacks to various phases of time. Like Ode To My Father which depicted Korean history from the 1950s till the recent times, Bharat too will highlight various important events of Indian history.”

‘Bharat’ had gone on floors on Sunday with Salman Khan and Disha Patani. Priyanka Chopra, who is wrapping up her Hollywood commitments, is expected to join the team in August.