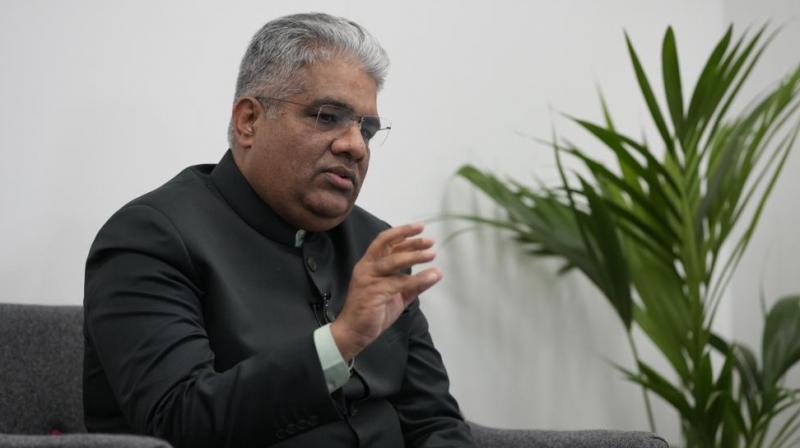 GLASGOW: India’s environment and climate minister says rich countries have “an obligation, responsibility, duty and a vow” to provide climate finance to developing nations and should deliver on an unfulfilled promise to raise $100 billion a year.

In an interview Wednesday with The Associated Press, Bhupender Yadav said addressing the shortcomings on finance was paramount to making the U.N. climate summit in Glasgow, Scotland, a success.

“I believe the biggest responsibility ... lies with the developed countries,” Yadav said. “Because if there is any gap that remains it is in the action for climate finance.”

Yadav heads the Indian delegation at the two-week talks scheduled to end Friday. A draft deal under negotiation noted “with regret” that rich nations had failed to meet their promise to provide $100 billion each year in climate finance to poor nations as of 2020.

“Climate finance isn’t charity,” Yadav told AP on the sidelines of the conference. “This is an obligation, responsibility, duty and a vow.”

He said helping the developing world cope with climate change is a call of conscience that “should be in the heart of every person. But especially in those who’ve a greater historical responsibility than others.”

The minister said India — a country with nearly 1.4 billion people or almost one-fifth of the global population and yet accounting for just 5% of its emissions — is among the few countries in the world on track to meet its climate targets before 2030.

However, emissions analysts say India should have more ambitious targets to help put the world on track to limit warming to 1.5 degrees Celsius, the goal of the U.N. climate negotiations.

India recently announced it would stop adding greenhouse gases to the atmosphere by 2070 — two decades after the “net zero” target set by the U.S. and 10 years after that of China. It has also promised to get half of its energy from clean energy and rein in its emissions growth by 2030.

But to achieve those goals, developing nations like India need financing.

India has been reluctant to commit to phasing out coal-fired power plants — the largest single source of human-caused emissions. The dirty fuel is crucial for producing electricity in the country where millions still don’t have access to it, and energy is crucial for development.

The draft on Wednesday also called for accelerating the phasing out of coal — the largest source of emissions — but didn’t set a timeline.

Asked about coal phaseouts, Yadav said “we are not phasing anything out completely right now. We will move towards our green energy, as per our national needs.”