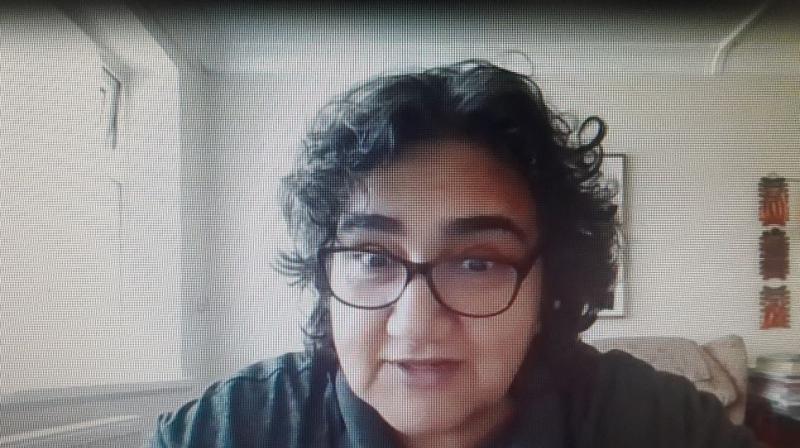 Kabul: At a time that the world is floundering to brainstorm a solution to the humanitarian crisis concerning women in Afghanistan, comes the voice of a valiant former judge. She is lobbying for the expedited evacuation and asylum of over 270 female judges targeted by Taliban. The spunky 55-year-old has herself suffered two attempts on her life, including a run-over. In 2008, at the age of 43, she emigrated from her country to the United Kingdom, where she works in the office of Debbie Abrahams, parliamentarian from the Labour Party.

Marzia Babakarkhail has zero regrets for taking on the Taliban and is planning her return to the country to join the nascent movement by women there against the repression. Excerpts from an interview by this writer.

What is your hometown? How long did you practise as a family courts judge? What inspired you to take up that profession?

I come from a city called Pol-e-Khumri in the northern part of Afghanistan. I studied Islamic law in Kabul University, trained in the Supreme Court and was a family court judge for eight years.

When I was a 16-year-old in Pol-e-Khumri, I was inspired by Qazi Nafisa to become a judge. She has passed away. When I was a judge, there were about 22 or 23 judges in Afghanistan and I was one of them. Since my time that number has increased manifold. In all countries, being a female judge is a huge argument for women’s role in public life, and most acutely so in Afghanistan.

What is your occupation at this point of time?

I am a Muslim feminist and public figure and I fight for justice and for women's rights in Afghanistan. At this point, we are trying to evacuate female professionals and their families from Afghanistan and lobbying the United Nations to arrange asylum for them.

The concern I have for the women activists, lawyers and judges in Afghanistan is this — right now, when I look out my window, I notice the polished panes and I like that. But many years ago, they broke down my door. Nine armed men came looking for me in my house. And that is going to happen to every single female professional in Afghanistan. For how long can they hide? For how long can they stay with their families? After a point, people will stop giving them shelter.

I left the same day they came for me the first time in 1999 though I returned later. I was still a sitting judge when I left Afghanistan.

Who do you think was more repressive, the mujahideen or the Taliban?

Female mayor Zarifa Ghafoori wanted to talk to Taliban. Do you think the Taliban can be reformed through dialogue? If not, what do you think prompted their new rhetoric on women’s rights?

I will give a short answer to your first question. Don’t waste your time. The proof of the pudding is in the eating. I do not agree with her.

The Taliban want legitimacy internationally. They are using women as a means to give people the message that they have changed. This has been proved wrong. See, they have now declared that women have to stay at home until the men change their minds.

Why do you think the United Nations has not stepped in directly?

This question you should ask the United Nations itself. Now, according to some of the messages I have received from various organisations, the UN will focus on aspects of the Afghanistan situation soon.

Do you take courage from the rise of the Northern Alliance? Would you trust them with regard to women’s rights?

Any kind of resistance against the Taliban is good. I frankly don’t know for certain what their stance is towards women’s rights. But some of the messages coming from them are very heartening. There is no reason to disbelieve them, despite the mujahideen ancestry of one of their leaders. Tomorrow, they may be our friend. But what will happen tomorrow, I am, once again, not sure. Maybe they will be martyred. Maybe they will negotiate peace. I am a free agent, I speak only for myself here, but I send them my good wishes. They will be in my prayers.

There is a consciousness about women’s rights that was absent 20 years earlier. What do you think brought that about?

Afghanistan today is not the same as 35 years back. The Taliban don’t know what kind of people we are now. We are very strong now. We have more educated people. The young generation of women are not the same people we were 20 years ago. Through the Internet and mobile telephony and the social media, they not only have a limited agency but access to role models and ideas. They know what women are capable of. They will not capitulate this time.

I will also argue that the Taliban has less support from the citizens, including men. If the people of Afghanistan supported the Taliban, they would not have flocked by the thousands to the airport and fatally risked their lives to escape.

Speaking for myself, I am going to Afghanistan one day. I will join the movement to fight the Taliban.

In Oriental cultures, stepping out for women is associated with dishonour. Do you think women can take back this definition? Do you think there can be a grassroots women’s movement in Afghanistan?

I agree with you about the importance of women to work outside the home and the need to correct the absurd definition of honour.

The grassroots movement that you are talking about is already present. The movement is on Twitter, on Facebook, in the media. We now have a civil society. Everybody is working silently, gathering evidence to present to the United Nations. When the Taliban came, professional women from the villages escaped to Kabul in order to be safe. They camped out in the streets. So now, where should these women go? The village girls are mentally stronger than the city girls. They know how wrong it is not to be free.

Take my example. A girl from Pol-e-Khumri, I paid a very high price to reform a difficult culture. And I have not stopped fighting. For which I have no regrets.