Seizing India-China standoff in Ladakh, Pakistan may push in more terrorists in J&K

Militant outfits in Pakistan including Hizb-ul-Mujahideen, Jaish-e-Muhammad and Lashkar-e-Tayyaba are joining hands to create mischief in JK 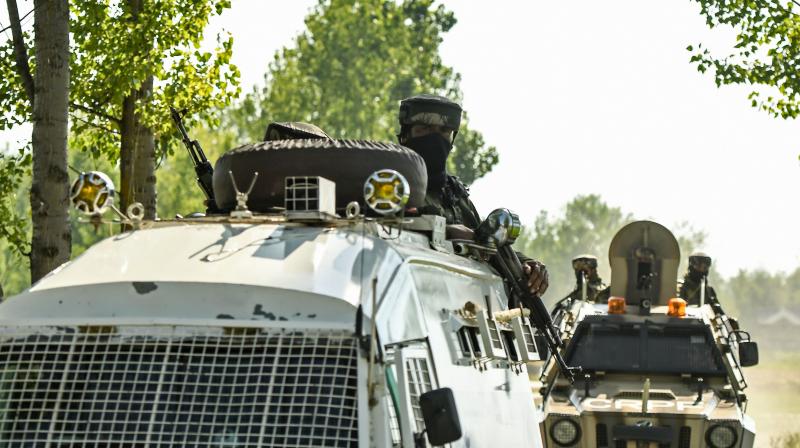 Security vehicles patrol near the site of a gunbattle between suspected militants and government security forces at Meej Pampore area of Pulwama district in South of Srinagar. PTI photo

Jammu and Kashmir’s police Chief Dilbag Singh said on Thursday that Pakistan could seize the situation thrown up by the standoff between Indian and Chinese troops in the strategic Galwan valley of Ladakh which turned violent earlier this week for pushing in more militants to fuel trouble in the Union Territory (UT).

“Pakistan will try to infiltrate more militants and terrorists and also give impetus to violence in the Kashmir Valley and elsewhere in J&K, taking advantage of the standoff on Ladakh border,” he said while chairing a meeting of senior officers to review the security scenario in the UT particularly its frontier districts.

Meanwhile, Indian and Pakistani troops again traded fire at a few places along the Line of Control (LoC) in J&K’s Kupwara and Jammu districts on Thursday. While an Army jawan Jeevan Lal of 8 JAKLI regiment was injured in the Pakistani firing in Akhnoor sector of Jammu, a similar violation of the November 2003 ceasefire understanding in Machael sector of Kupwara created a ‘war-like situation’ early Thursday, the Army and police sources here said.

The Army sources said that this was 231st ceasefire violation by Pakistan along the de facto border which evoked “strong and befitting” response from the Indian Army.

The Pakistani officials blamed the Indian Army for initiating combat and said that due to “indiscriminate and unprovoked” firing by the Indian troops in Bagsar and Nikial sectors on their side of the LoC four civilians including siblings Razeem Saleem, Tehzeeb, both in their twenties, 13-year-old Ali Maroof and 60-year-old Rasheeda Bibi were killed and another elderly resident Muhammad Hussain was seriously injured.

A foreign office spokesman in Islamabad said that Indian Charge d’ Affaires Gaurav Ahluwalia was summoned by Director General (South Asia & SAARC) Zahid Hafeez Chaudhri, to register Pakistan’s strong protest over the ceasefire violations by the Indian forces along the LoC on June 17. He said that the Indian Army and BSF have violated the ceasefire understanding by resorting to heavy artillery fire and using heavy-calibre mortars and automatic weapons as many as 1,410 times, so far this year, resulting in 12 fatalities and injuries to 102 persons.

J&K’s DGP Mr. Singh, however, told the officers meeting that cross-border infiltration attempts from the Pakistani side are being made continuously even during the COVID-19 pandemic and “we have to be extra alert to thwart such attempts”. He said that as per intelligence reports there are over 300 militants at “launch pads” on the Pakistani side of the LoC, ready to infiltrate into J&K “to increase the pitch of violence in the Valley and beyond”. He cautioned the officers that  in view of the Ladakh standoff, “Pakistan will try to infiltrate more terrorists and also give impetus to violence in Kashmir Valley and elsewhere” and, therefore, “the borders need our extra attention”.

He also said that reports available with the police authorities say that militant outfits in Pakistan including Hizb-ul-Mujahideen, Jaish-e-Muhammad and Lashkar-e-Tayyaba are joining hands to “create mischief” in J&K. He reiterated that there are greater challenges of infiltration for which “we have to be prepared in the changed environment”. He directed the officers to take care of the vital installations and also review minority guards.

Mr. Singh further said the security presence on the highway grid has been increased by sending out mobile patrols and increasing the number of nakas set up along highways and other roads and in vulnerable areas. As far as the fight against the militants, he said the J&K police, Central armed police forces and the Army “are continuing with successful operations in the counterinsurgency grid and on the borders”.