The 'Queen' actress, who was recently at the Cannes Film Festival with the 'Padmaavat' actor, got flak on social media. 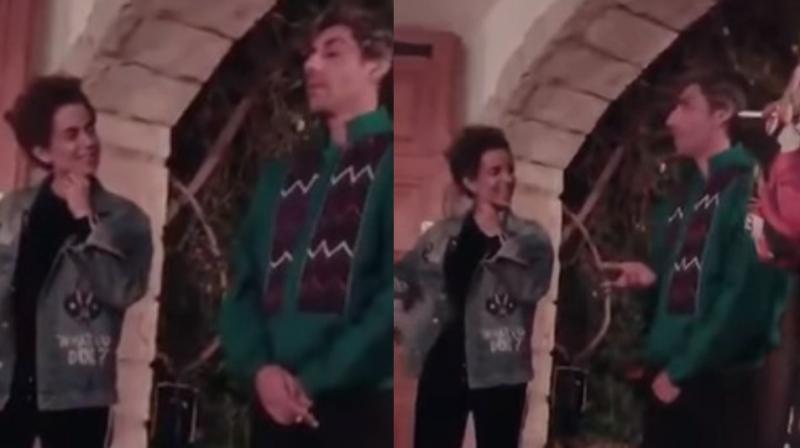 Cannes: After Salman Khan’s insensitive comment that he felt like a ‘raped woman’ following wrestling training for his film ‘Sultan’, this time a ‘rape’ joke made by Jim Sarbh is making headlines.

What makes matters worse is that Kangana Ranaut, termed a feminist and among the few who slammed Salman’s comment, is seen laughing on it in a video that is going viral.

Only a snippet of the video has made its way to social media, so the entire joke and exact words, due to crowd noise, are not clear, by we hear Jim joking about ‘being raped by 12 prostitutes’ and also about Punjabis after which Kangana is seen laughing and clapping.

Some of the Twitteratti  termed Kangana a 'hypocrite' and pointed out her calling out Salman for his comment, while some said actresses were feminists only on social media.

Expressing disappointment and disgust in both Kangana and Jim , some of the users wrote, ‘rape jokes are not funny’ and ‘rape is a dark word.'

Jim Sarbh is cancelled.
One. He made a hideous joke and included a vital thing called 'Rape'
Two. he included 'prostitute' in that "I would rather be raped by 12 prostitutes..." are you freaking kidding me ? you just stated that they are as equal as Rapists ?
Go get a life man

Uma, Dhanush, Kangana whoever was there, shame on you all for laughing at his joke.

Dear Jim Sarbh/ Kangana Ranaut
Rape jokes are not funny. Rape is NOT a joke. If you tell or laugh at jokes about rape you are a part of the problem. https://t.co/Pk5bSB9zCr

Video got deleted so uploading it again.
Woke queen Kangana seen laughing at a rape joke here along with Jim Sarbh. Kangana had previously called out Salman for an insensitive rape remark.pic.twitter.com/B1lpIqy0Kg

Rape is a dark word. Let’s not water it down to describe a brutal gym session or a bad day at work or with a joke.@jimSarbh #KanganaRanaut have some sense before cracking such jokes !!

@jimSarbh very disappointed in you.

Jim Sarbh making a rape joke and Kangana laughing on it only proves how most Bollywood actors are feminists just on the social media. Same goes for Sonam posting pic as to how she supports Salman.
Lesson: Don't take them too seriously.

Kangs is A+ grade hypocrite (nothing new) and this Jim Sarbh turned out to be a piece of shit. Rape jokes are not okay... stfu ..😠👎

Meanwhile, Jim cleared the air on the controversy and told BollywoodLife, “First of all, I understand the environment we live in just now, in light of recent events, but more frankly, in light of events going on since the beginning of human consciousness, rape is a deadly serious issue. I treat it as such. The joke that I made is about a Priest blowing a very casual question completely out of proportion, condemning alcohol, prostitutes, and rape all simultaneously. The Punjabi (or whichever ethnicity, depending on the audience) responds to the situation by consenting to it and expressing his sexual proclivities. I personally do not find it to be about a desire to rape, or to inflict sexual violence upon another, but a subversive and comedic response to an extremely volatile sentence.”

He added, “I did not intend to hurt anybody, and I certainly do not consider actual sexual or physical violence funny.”

We don’t know if that can be considered an apology, but unlike Salman, Jim at least cleared the air.