Entertainment   Bollywood  10 May 2018  Cannes: Kangana Ranaut to remind you of '60s actresses as she dons saree for debut
Entertainment, Bollywood

Cannes: Kangana Ranaut to remind you of '60s actresses as she dons saree for debut

The 'Queen' actress' retro-style debut at the glamourous film festival was impressive in a Sabyasachi creation. 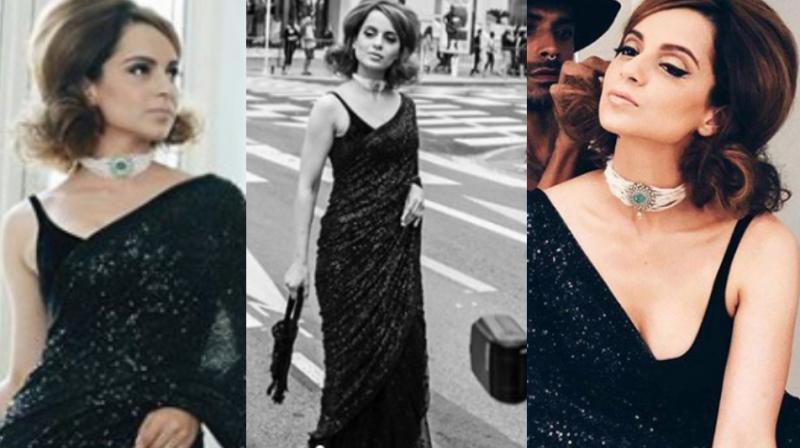 Cannes: While Cannes has been synonymous with Aishwarya Rai Bachchan for India over the years, several actresses have also managed to make their presence felt at the French Reviera.

After the ex-Miss World, Sonam Kapoor, Deepika Padukone, Vidya Balan, Mallika Sherawat, among others have also enjoyed some of the spotlight associated with the glamour event.

The latest to join this list is the one often referred to as the ‘Queen of Bollywood’, Kangana Ranaut.

The actress made an impressive debut in a look that will remind you of the heroines of the 60s.

She accessorised her look with a ‘teenmaniya’ necklace crafted of diamonds and pearls and a Sabayasachi batua (purse).

Be it her hairdo or her cat eyes or the style of draping the saree, Kangana surely sent us back to the golden generation of some of our most beautiful actresses.

Kangana has been invited by the liquor brand Grey Goose as a part of their 'global celebration of cinematic craft', Vive Le Cinema.

She was also seen in a discussion with Central Board of Film Certification chief Prasoon Joshi at India Pavillion event.

While her fan clubs shared pictures of photographers trying to click the actress as she ‘owned’ the streets, we are not sure if she will walk the red carpet. We are keeping our fingers crossed.