Jean-Claude Juncker, said: ‘This is a difficult negotiation but we have now made a first breakthrough.’ 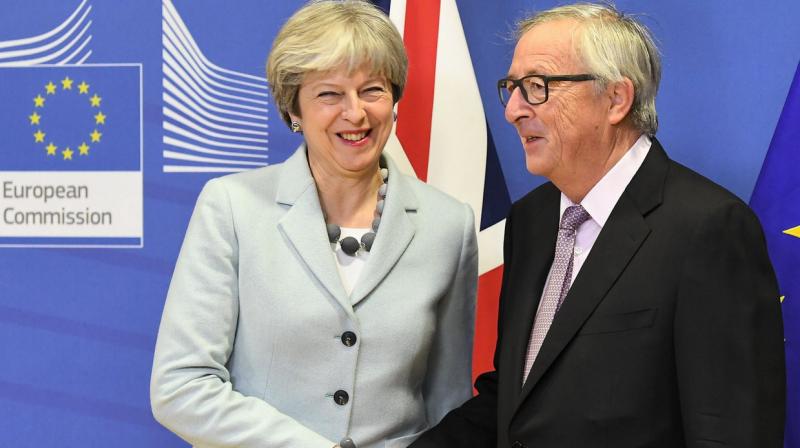 The Commission is satisfied that sufficient progress has been achieved in each of the three priority areas of citizens’ rights, the dialogue on Ireland / Northern Ireland, and the financial settlement, as set out in the European Council Guidelines. (Photo: AFP)

Brussels: The European Commission on Friday said Britain and the bloc have made “sufficient progress” in divorce talks. Below please see the full text of the Commission statement.

The Commission’s assessment is based on a Joint Report agreed by the negotiators of the Commission and the United Kingdom Government, which was today endorsed by Prime Minister Theresa May during a meeting with President Jean-Claude Juncker. The Commission is satisfied that sufficient progress has been achieved in each of the three priority areas of citizens’ rights, the dialogue on Ireland / Northern Ireland, and the financial settlement, as set out in the European Council Guidelines of 29 April 2017.

Jean-Claude Juncker, the President of the European Commission, said: “This is a difficult negotiation but we have now made a first breakthrough. I am satisfied with the fair deal we have reached with the United Kingdom. If the 27 Member States agree with our assessment, the European Commission and our Chief Negotiator Michel Barnier stand ready to begin work on the second phase of the negotiations immediately. I will continue to keep the European Parliament very closely involved throughout the process, as the European Parliament will have to ratify the final Withdrawal Agreement.”

Michel Barnier, the European Commission’s Chief Negotiator, said: “The Commission’s assessment is based on the real, genuine progress made in each of our three priority areas. By agreeing on these issues, and settling the past, we can now move forward and discuss our future relationship on the basis of trust and confidence.”

If the European Council (Article 50) considers that sufficient progress has been made, the negotiators of the European Commission and of the United Kingdom Government will begin drafting a Withdrawal Agreement based on Article 50 of the Treaty on European Union on the basis of the Joint Report and the outcome of the negotiations on other withdrawal issues.

In line with the Guidelines of 29 April 2017, and once the Member States agree with the Commission’s assessment, the Commission stands ready to begin work immediately on any possible transitional arrangements and to start exploratory discussions on the future relationship between the European Union and the United Kingdom.