Maldives sends envoys to ‘friendly nations’ amid crisis, India not on list

The envoys will visit China, Pakistan and Saudi Arabia and provide updates on the current political situation of Maldives. 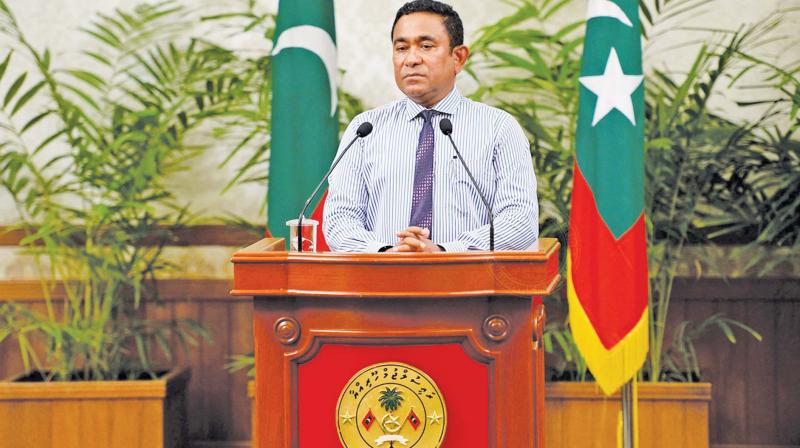 Maldivian President Abdulla Yameen has grown close to China and Saudi Arabia during his tenure, with both countries investing heavily in the tiny island nation. (Photo: AP)

An announcement by Yameen’s office said that Members of the Administration’s Cabinet will visit “friendly nations of the Maldives” and “provide updates on the current situation”.

The announcement came hours after China warned against any external intervention in the island nation. The statement was apparently aimed at New Delhi that had received multiple appeals from Maldives’ Opposition leaders seeking Indian military intervention to release judges and political detainees.

"The international community should play a constructive role on the basis of respecting the sovereignty of the Maldives rather than take actions that may further complicate the situation," Chinese foreign ministry spokesman Geng Shuang said without mentioning India.

Former Maldivian President Mohamed Nasheed had on Tuesday asked India on to send an “envoy, backed by its military” to free two Supreme Court judges and former president Maumoon Abdul Gayoom, who were detained on the orders of Yameen. “We request a physical presence,” he had said.

India's only statement issued on Tuesday called the government's refusal to abide by the Supreme Court and the imposition of emergency "disturbing". New Delhi did not refer to former President Nasheed's appeals.

Having historically held more clout in the islands, India has sought to push back against China's growing influence in Maldives.

However, Yameen has drawn close to China and Saudi Arabia during his time in office, with both countries investing heavily in the tiny nation.

Located near important shipping lanes, the Maldives have assumed greater importance to China after it began building political and economic ties as part of its so-called "String Of Pearls" strategy to build a network of ports in the Indian Ocean region.

Maldives, which has seen a number of political crisis since the ouster of its first democratically-elected president Nasheed in 2012, plunged into a political chaos on Thursday when the Supreme Court ordered the release of nine imprisoned opposition politicians, maintaining that their trials were "politically motivated and flawed".

The Yameen government refused to comply with the ruling, which prompted a wave of protests in Maldivian capital, Male.

Following clashes and protests, the Yameen government imposed the emergency However, on Tuesday night the apex court revoked the order to release nine high-profile political prisoners.