She played at seven major international tournaments in the sub-junior category winning one gold, two silver and four bronze medals. 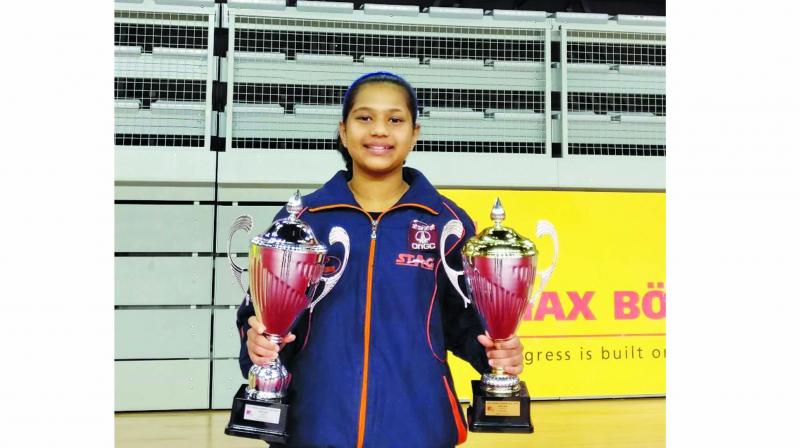 Talented Mumbai paddler Diya Chitale capped off a dream run with seven International medals. Now the 14-year-old Santacruz resident wants to do even better next year. She played at seven major international tournaments in the sub-junior category winning one gold, two silver and four bronze medals.

“I did really good in international tournaments. In Croatia, I beat the then world no 7 who is now No 3 in the U-15 category. I became national champion in the sub junior category. In 2018, I will try to do better and improve my rankings,” said Diya, who is currently ranked 21 in U-15 category in the world and No 3 among sub-junior girls in India.

Diya won a gold medal in the team event, though, as part of a strong Team Asia 2017 ITTF World Cadet Challenge in Suva, Fiji in October. She won a silver in the girls’ doubles category of the event after pairing with Hanna Ryu of South Korea. Diya did well in the singles event as well, finishing 10th.

She claimed two bronze medals in the Croatia Junior and Cadet Open. The Mumbai girl upset World No. 7 and No. 2 seed Satsuki Odo of Japan 11-7,3-11,11-8,12-10 in the quarter finals to assure herself of a bronze in the singles. Diya had earlier won a bronze in the Cadet Girls’ (Under 15) team event.

“I am training in Germany for about 5-6 months under Peter Engel for the last couple of years. I learnt a lot there as it is a big centre and we get to play with big players.

“Playing in international tournaments also gives me exposure,” said Diya, who trains at Khar Gymkhana when in Mumbai under coach Sachin Shetty and is mentored and guided by legendary Kamlesh Mehta.

“Besides stressing on technique, I have been working on the mental and fitness part also to come good in pressure situations. Reema Shah is my mental conditioning coach and Yogesh Kanchgar my fitness trainer,” she revealed.

The teenager, who is currently studying at the Arya Vidya Mandir School, Bandra, says she is thankful to her school authorities for their support. “They grant me leaves whenever I need them, even during exam time. It helps me to focus on the game only,” she said.

The right-handed paddler known for her aggressive style of playing and solid forehand is also working on her backhand as well so as to be more menacing on the table. “My forehand is strong and I am working more on backhand so that I can become more competitive,” she said. Diya will be next seen in action in February in international tournaments.

“I was a state level player in skating first. Once I saw a TT table placed for a fun activity when I was on vacation with friends. Since then it became my hobby. Later I joined Sachin Sir’s coaching in Khar Gymkhana. I won a bronze in my first tournament and my journey started,” she recollected