The hunting of large prey such as mammoths and sabre-tooth tigers are relatively recent chapters in the human saga, they note. 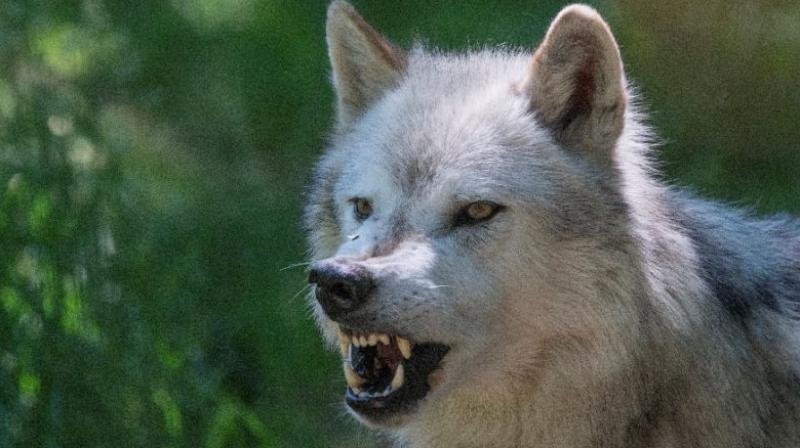 Wolves are among the predators attracted to a molecule from mammal blood known as E2D.

The faintest whiff of a molecule from mammal blood known as E2D sends some animals into a predatory frenzy but frightens others — including people — into retreat, scientists have discovered.

Never before has the same molecule been known to provoke diametrically opposite behaviours in creatures ranging from horse flies to humans, hinting at deep evolutionary roots, they reported in the journal Scientific Reports.

Animals, and especially mammals, use their sense of smell to find food, hook up with partners, and detect danger.

Many of these chemical triggers are specific to one species, or work in combination with other odours.

But E2D — said to give blood a metallic aroma — appears to be in a class of its own.

“The odour of blood is characterised by a rare universality,” senior author Johan Lundstrom, a biologist at the Karolinska Institute in Sweden, told AFP.

In earlier research, authors participating in the study isolated E2D from pig’s blood and showed that wild dogs and tigers were no less attracted to its scent than to blood itself.

The new team duplicated those experiments, this time with wolves, and got the same result: the pack licked, bit and protected a piece of wood smeared with a synthetic version of the molecule as if it were a fresh kill.

Blood-sucking horse flies were likewise drawn to it, showing equal enthusiasm for E2D and animal blood.

But what about the hunted rather than the hunter?

If the molecule has persisted across tens, or even hundreds of millions of years, the scientists reasoned, then perhaps they would react too, though not in the same way.

“We hypothesised that prey species would be under evolutionary pressure to become sensitive to E2D, to help them avoid an area where a bloodbath is going on,” said Lundstrom.

Sure enough, rodents in a cage recoiled from the molecule, as much as they did from the red stuff.

When it came to humans, the researchers were not sure what to expect. Would people show blood lust or fear?

And how to find out?

“We couldn’t just expose people to the odour and ask, ‘how do you feel?’,” said Lundstrom. “We had to find objective measures not based on subjective feelings.”

They did this in three ways.

In one standardised test, subconsciously leaning forward while standing indicates attraction, while a slight tilt backwards means one senses danger.

Forty volunteers smelled three scents, none more or less “pleasant” than the other. They did not know when the molecules were released, and knew nothing about the study or its relationship to blood.

Not only did E2D cause people to rock back on their heels, it only took a tiny dose.

“Humans are able to detect E2D at concentrations of less than one part per trillion,” said co-author Matthias Laska, a zoologist at Linkoping University in Sweden.

“This is uncommon. For the majority of odorants which have been tested with humans, the detection threshold is in the parts-per-million or billion range,” he told AFP.

The researchers also measured “micro-sweating”, and gauged response time in a visual test in which quick, accurate answers indicate a perceived threat.

In all three experiments, subjects exposed to E2D showed signs of stress and fear.

That humans react more like mice than wolves is not that surprising, the authors say.

“Although humans are thought to be opportunistic predators, palaeontological data indicate that early primates” — our distant relatives — “were small-bodied insect eaters,” said the study, published Friday.

The hunting of large prey such as mammoths and sabre-tooth tigers are relatively recent chapters in the human saga, they note.

E2D molecules occur as a by-product when lipids, or fats, in blood break down upon exposure to oxygen in the air.