Mr Modi has invested hugely in creating the illusion that the Congress Party’s preferred leader was the Sardar and that Nehru was imposed on it. 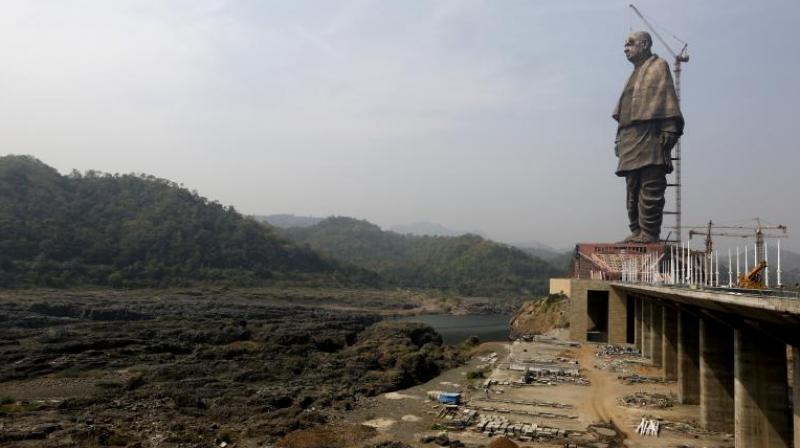 Today, as the nation celebrates the 143rd birth anniversary of India’s Iron Man, Prime Minister Narendra Modi will inaugurate the giant Sardar Patel statue facing the Narmada Dam, 3.2 km away on the river island called Sadhu Bet near Rajpipla in Gujarat. Standing almost 600 feet tall, it is the world’s tallest statue. The project, begun initially by the Gujarat government in December 2013, is probably the only achievement the Narendra Modi government has to show. The project, worth Rs 2,989 crores, was won by Larsen and Toubro. Initially, the total cost was estimated to be about Rs 3,001 crores, paid for by the Government of India. Initially, Mr Modi flagged it off, to be built by small contributions and crowd-funding, but like all his other projects the means were actually something else. The bronze plates, to create the likeness of Sardar Patel were imported from TQ Art Foundry, a part of the Jiangxi Toqine Company in Nanchang. Hundreds of Chinese workers also toiled at Chad Bet to “assist” L&T in the concrete construction of the statue core.

The statue was as much a bold assertion of Gujarati nationalism as it was to give Narendra Modi a political lineage to distinguish him from the parent RSS, which sat out the freedom movement. Please note that he didn’t build a statue of Guru Golwalkar or Deen Dayal Upadhyaya or even V.D. Savarkar. Or for that matter even Subhash Chandra Bose, who still has a far bigger imprint on our minds than Sardar Vallabhbhai Patel ever did.

After Mr Modi’s brazen attempt to draw political sustenance from the memory of Sardar Patel, an unseemly argument has broken out between the Congress and the BJP over who are the true inheritors of Sardar Vallabhbhai Patel’s legacy. That the BJP’s not-so-disguised attempt to arrogate it for itself in a bid to give itself a nationalist movement genealogy is a tawdry attempt to rewrite history. What Sardar Patel thought of the RSS is a matter of record. He minced no words about what he thought of it — that it was fascist and narrow-minded, and was responsible for the climate of hatred that led to Gandhiji’s assassination. In a letter on July 18, 1948, after Gandhi’s murder, the Sardar wrote to Syama Prasad Mookerjee, who would later found the Jan Sangh: “As a result of the activities of these two bodies (RSS and Hindu Mahasabha), particularly the former, an atmosphere was created in the country in which such a ghastly tragedy became possible. There is no doubt in my mind the extreme section of the Hindu Mahasabha was involved in this conspiracy. The activities of the RSS constituted a clear threat to the existence of the Government and the State.” The RSS now has the government, but it still presents a clear and present danger to the original idea of India, as an inclusive, egalitarian nation united by a Constitution and a shared purpose.

Mr Modi has invested hugely in creating the illusion that the Congress Party’s preferred leader was the Sardar and that Nehru was imposed on it. Nehru became PM because he was by far the Congress’ most popular politician, after Gandhiji. Nehru was the party’s star campaigner, captivating people with his soaring oratory and easy communication style in Hindustani. Patel might have had a firm grip on the Congress organisation, but he was far behind Nehru in popularity and charisma. Patel himself conceded this at a massively-attended Congress rally in Mumbai, when he told the celebrated American author and journalist Vincent Sheean, “They come for Jawahar, not for me.” Patel’s realism was the hallmark of his politics and that made him the perfect foil to Nehru’s idealism.

It is also well known that the Congress had little time for the Sardar’s legacy till Mr Modi tried to don it. But the Congress’ attempt to rediscover the Sardar’s legacy and claim exclusive rights over it is also no less tawdry. Even when L.K. Advani tried it was not taken seriously. But like the Sardar, Mr Modi too is a Gujarati and that has a certain resonance in that state. We know how strongly Mr Modi feels about the Gujarati identity. His unwillingness to insure the Asiatic lion against extinction by translocating a few prides emanates from this.

It is well known that there were serious differences between Jawaharlal Nehru and Vallabhbhai Patel. It was less a clash of personalities as it was a clash of ideologies. The Sardar espoused a more robust and practical nationalism, and laissez faire economic policies. Nehru wanted to dismantle the colonial bureaucratic system, but Patel wanted to retain the centralised civil service structure, the price for which we are still paying. Nehru was more internationalist, more leftist than realist, and preferred central planning to free market policies. Their policy inclinations were as different as chalk and cheese. But both were patriots tempered by the nationalist movement and both were popular leaders of the Congress rank and file, and the nation as a whole. Above all, both were thorough gentlemen, and whatever their differences never disrespected each other and subverted each other with factional intrigue. They preferred a moderation in language that would now be seen as a sign of weakness. They preferred to conciliate rather than divide.

Congress leaders who now claim to be legatees of Sardar Patel would hardly know of him and what he stood for. For a start their language is different. Those days they belonged to a very different school of politics. Politics was about policies and grand ideas. To qualify in politics nowadays, one has to be a graduate of the school for scoundrels, where sycophancy and personality worship are the main attainments needed.

Sardar Patel had a thriving law practice which he abandoned to heed the Mahatma’s call, Jawaharlal Nehru was a superbly educated and highly evolved personality, and politics to him was a calling, not an occupation. Neither Narendra Modi nor Rahul Gandhi have much in them to claim such legacies. They are symptomatic of the sad days that have befallen the nation that was midwifed and contemplated by Nehru and Patel.