Collaboration with the authorities, has been difficult, and sporadic, primarily because the government’s attitude has been inconsistent 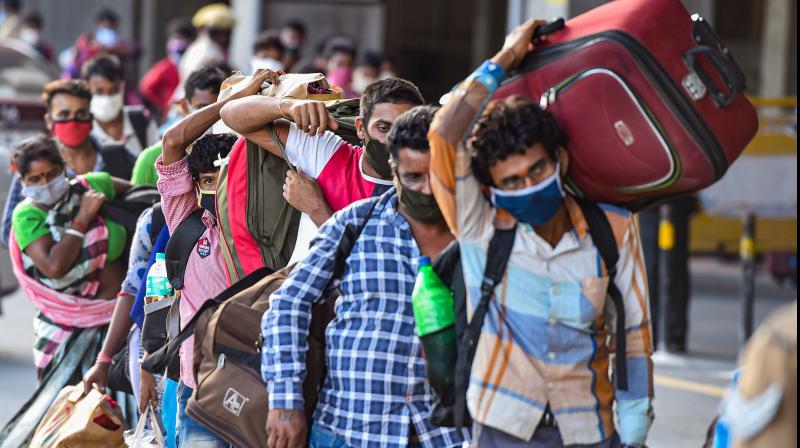 Migrants stand in a queue at Central Railway Station to board a Shramik Special train for West Bengal, during ongoing COVID-19 lockdown, in Chennai. PTI Photo

Moved by the plight of stranded unorganised sector workers, scores of Indians are providing cooked food, dry rations and are arranging transport to their distant native villages. Some felt moved by empathy, others by civic duty, all hoping that our actions would supplement action by the government in the time of this unprecedented pandemic related lockdown.

After two months of this activity we are left wondering whether the government really wants us to supplement its work, or has it decided to abandon the workers to the meagre resources of non-governmental organisations and humanitarian intervention alone?

The paltry ration of 5 kilos and `500, roughly equivalent to a day’s wage of a skilled worker was distributed in the first week of April to about 3.5 lakh migrant workers — a gross underestimation based more on wishful thinking rather than any reliable dataset.

More serious estimates put the figure at close to 20 lakh people living and working in the state of Telangana. Rice was the main foodgrain distributed, totally unmindful of the fact that people from the northern states eat wheat. The government’s one-time relief grant of `1,500 announced for the local white card holders did not reach many for a variety of reasons — from not having the ration cards to not having an operational bank account.

The drastically less endowed civic volunteer networks, stepped in at this point to fill these gaps, and worked at the molecular level. They calculated the nutritional requirements per person and per family to reach out with rice or atta, dal, oil, condiments for as many as they could.

They exchanged the numbers of wholesale dealers who could reach such packaged rations as fast as they could to as many at short notice. They drew resources from families and friends, connected with each other across towns, cities and states, started helplines and collaborated with each other and the authorities online and offline.

Collaboration with the authorities, however, has been difficult, sporadic, episodic and personalised, primarily because the government’s attitude and approach have been inconsistent and lacking clarity, not merely in the case of dry rations but travel too. What is truly puzzling is its decision to entrust migrant worker registration for travel to the police machinery, which is structurally tuned to treat the poor with disdain and as delinquent if not criminal.

Resenting this uncharacteristic task that they got saddled with, the police often shooed away the migrants seeking registration for travel. Rumour was that they were even collaborating with the owners and contractors to prevent migrants from leaving the premises. Finally, when clear orders arrived, they also bundled the migrants into function halls, dropped the unsuspecting migrants at state borders and, reluctantly though, also registered the migrants and ferried them to the railway stations to board the Shramik trains.

Restrictions on inter-state bus services and a stingy number of Shramik trains forced people to take to the highways on foot, and compelled the civic voluntary networks to support travel for the abandoned workers. Connecting with local authorities in receiving states, they shared passenger lists for onward travel and community quarantine.

Migrant worker lists compiled through volunteer helplines are now being shared with the authorities for train travel. However, extreme secrecy and lack of clear policy regarding travel has led to a strange and untenable situation on the ground.

Chaos on Medchal Highway 44 where the migrant workers continue to congregate, either of their own volition or dropped by their employers, illustrates the situation.

Local authorities do not have the resources or clear instructions to feed or run shelters for them. With inadequate trains and desperate workers determined to walk, the volunteer networks are engaging expensive long-distance private bus services.

One network’s May expenditure of sending 4,500 people by buses to West Bengal, Uttar Pradesh, Bihar, Jharkhand, Odisha, Chhattisgarh was nearly one crore rupees — an amount that could have sent nearly thrice that number by Shramik trains or state transport buses. With the brick kilns now closing and nearly one lakh Odiya seasonal migrants ready for their annual return, the need for clear policy guidelines on trains and interstate buses has become urgent.

Apart from grandiose statements and announcements about ration and travel by the Central and state governments, concerted action for migrant workers has been sorely missing. A few empathetic officers, a clutch of High Court Orders in response to PILs, overworked helplines, spurts of action by the administration cannot replace a resolute policy for migrant workers. As non-voters, they remain outside the political (party) discourse of (localised) citizenship and do not receive any welfare transfers. The terms “guest workers” or “development agents” clearly describe their temporary worker status with their employers, without full citizenship. It is not sudden or coincidental.

The wilful neglect of such workers, advocated and practiced over two decades of neo liberal labour reforms, has left only the “humanitarian” prism through which their precarity, vulnerability and distress can be addressed. But humanitarianism and voluntarism, motivated by emotions of guilt or saviour complex or empathy or civic duty have severe limitations.

After two months, with depleted resources and growing threat of Covid infection many volunteers are wondering how long they can go on. Will the government finally recognise and squarely address the informal sector worker question and step in with clear and concrete policy and determined action?