Opinion: It’s no time for talks

It is now evident that Islamabad’s attempt once again is to draw international attention to its claims on Kashmir. 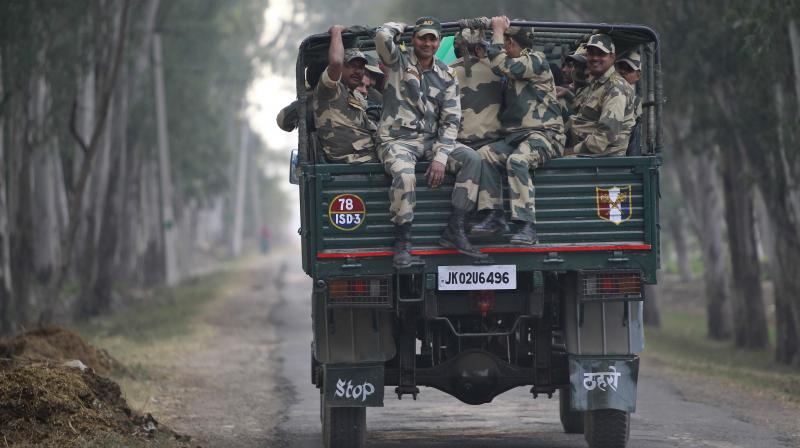 Indian Border Security Force soldiers travel on a truck to be deputed for night patrol duty along the India-Pakistan international border in Ranbir Singh Pura, about 25 kilometers from Jammu, India. (Photo: AP)

The Line of Control has not been quiet since Pakistan mounted a terrorist offensive inside India, capping its effort with the killing of 19 Army soldiers at Uri in Kashmir in mid-September, and this country retaliated with cross-LoC raids. It is now evident that Islamabad’s attempt once again is to draw international attention to its claims on Kashmir. Its case is that India is threatening stability in the region through its military activity on the LoC (in which it claims its civilians have been killed) which, in turn, is to conceal its violation of human rights in Kashmir.

This is far-fetched and convoluted, and anyone can see through the game. The government has for now stated that inflicting terrorism on India and a push for dialogue — the standard Pakistani template — cannot go hand in hand. It’s in this perspective that at this stage India has ruled out a bilateral conversation when Pakistan’s foreign affairs adviser Sartaj Aziz (effectively foreign minister) arrives in Amritsar in early December for the Heart of Asia conference on Afghanistan.

In the overall context, it was intriguing to find UN Secretary-General Ban-ki Moon urge restraint by both India and Pakistan on the LoC. He has completely overlooked the terrorism aspect, one of the world’s worst afflictions. The recent comments of Hussain Haqqani, Pakistan’s former ambassador to Washington, are pertinent here — that Pakistan’s promise to use American aid of $33 billion to fight terrorism has been reneged on mainly due to Islamabad’s (misplaced) rivalry with India.