Hills still on edge, GJM takes out rally with body of activist 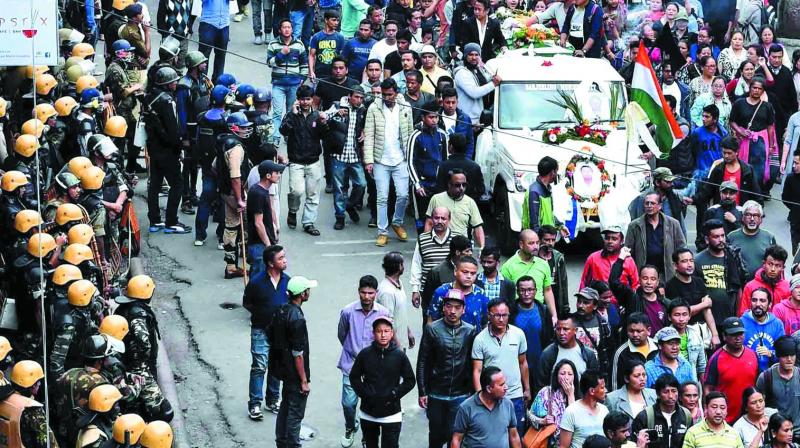 GJM activists in Darjeeling on Sunday take out the funeral procession of party activists who died Saturday. (Photo: PTI)

Kolkata: A day when Gorkha Janmukti Morcha chief Bimal Gurung asserted that their movement for a separate Gorkhaland would intensify, sporadic incidents of violence like setting fire to some government offices and a police vehicle continued to rock the Hills on Sunday. However, there was no retaliation on the part of the police administration.

Morcha chief Bimal Gurung in an audio visual statement termed the chief minister’s claims that insurgent groups are supporting their movement as “white lies”. “The allegations are baseless, Mamata Banerjee is trying to mislead the people. It is not a political fight but a fight for our own identity. We will not stop until and unless Gorkhaland is achieved. The struggle will intensify in the hills,” the Morcha chief said in the statement.

Reacting to chief minister’s proposal of holding talks if the Morcha stopped their violent movement and bandh, Darjeeling MLA Amar Rai said on Sunday that they will not hold talks with the Trinamul Congress. “We can sit with the Central government on the condition that our demand for Gorkhaland will be addressed. However, we do not want any discussion with TMC,” he said.

The Morcha observed Black Day at Darjeeling and conducted rallies with three dead bodies, whom they claimed had been killed by police firing on Saturday. The rally was supported by a section of common people who were seen conducting silent protest rallies that terminated with the procession of Morcha supporters reaching Chowkbazar. The Morcha supporters’ rally, however, had slogans demanding Gorkhaland.

The Morcha set fire to two panchayet offices at Kalimpong, a government library at Kalimpong in the morning and later in the day torched a police vehicle at Pedong Bazar.

The police cordoned off the entire procession but did not resort to any sort of tactics to stop the rallies of the Morcha that they had done in the last few days. The Army continued their route march throughout the day in the Hills.

Meanwhile, in the wake of the 12 hour bandh call in the Doars, Gorkha activists on Sunday blocked roads and staged demonstrations at many places in the plains. However, there was not any noticable effect.