Mortal remains of Binapani Devi was taken to streets in a procession before it was consigned to flames at a crematorium in Thakurnagar. 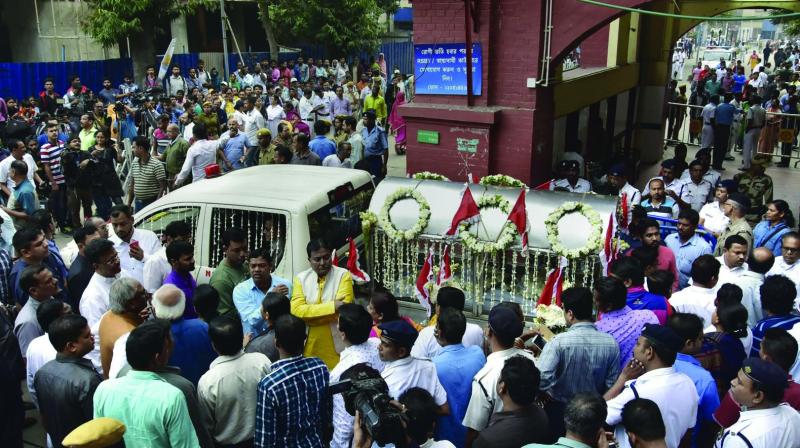 Kolkata: The last rites of Matua community matriarch Binapani Devi, who died in a city hospital on Tuesday, was held with full state honours and gun salute in North 24 Parganas district on Thursday.

The mortal remains of Binapani Devi, popularly known as ‘Boro Ma’, was taken to various streets in a procession before it was consigned to flames at a crematorium in Thakurnagar.

Thakurnagar is the headquarters of the Matua Mahasangh, the central body of the scheduled caste community which is a significant political force in the state.

The last rites, attended by thousands of followers of Boro Ma, were earlier scheduled to be held on Wednesday evening.

It was rescheduled on Thursday to enable the Matua community members pay their last respect to Binapani Devi.

Manjul Krishna Thakur was a Trinamul Congress MLA and minister but he had resigned and contested as a BJP candidate in Bongaon Lok Sabha bypoll in 2015 but was defeated by his sister-in-law and Kapil Krishna’s wife Mamata Bala Thakur.

After Boro Ma’s death on Tuesday at the age of 100, her body was taken in a flower-bedecked hearse from state-run SSKM Hospital to Thakurnagar the next day in presence of state minister Jyotipriyo Mallick and Mamata Bala Thakur.

Matua votes were considered a major factor in the Trinamul Congress’ win in the 2011 and 2016 Assembly polls.

Prime Minister Narendra Modi had met Boro Ma this February during his visit to Thakurnagar in North 24 Parganas district where he addressed a rally.