Firemen said that the building could collapse as the fire has spread on all the floors. 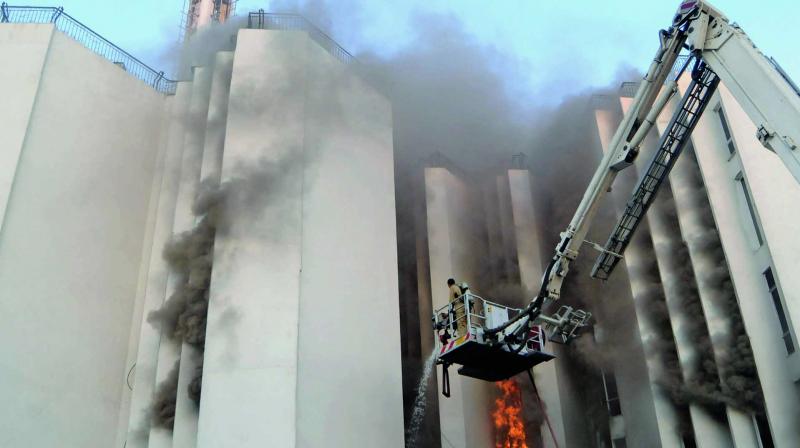 Firefighters try to douse flames after a massive fire at the Times of India building at ITO in New Delhi. (Photo: Biplab Banerjee)

New Delhi: A major fire broke out on Sunday evening at the Times of India building in ITO, the second such incident in two years.

A fire official said that the flames were reported around 4.45 pm and 31 fire tenders were rushed to the spot. The flames were reported in the first floor of the five-storey building in Bahadur Shah Zafar Marg. The blaze has now been partially doused and operations are on. The extent of the damage has not yet been ascertained. Due to the blaze, firemen have not been able to get access to the main source of fire. Incidentally, a major fire had engulfed parts of the building’s top floor in May last year.

Fire officials said that they initially sent six fire tenders when they were informed about smoke emanating from the building. Later, additional fire-tenders were pressed into service as it turned out to be a big blaze. More than 125 firemen are still trying to douse the fire. “31 fire engines are currently operating. Fire fighting operations are on, no casualties have been reported,” chief fire officer (West) Vipin Kental said.

A senior police officer said that the fire started in the server room on the first floor of the five-storey building. The people present there managed to get out in time.

Firemen have employed sky-lift to gain entry into the building. Firemen said that the building could collapse as the fire has spread on all the floors.

“It is suspected that there was some problem in the cooling system and extra heat was generated. It is suspected that it was the trigger for the fire,” he said that spread quickly through the first floor,” he said, adding, “We have asked the people not to enter the building premises as it can be dangerous.”