Around 10-15 students are still admitted to the Hamdard Institute as a precautionary measure, a senior police officer said. 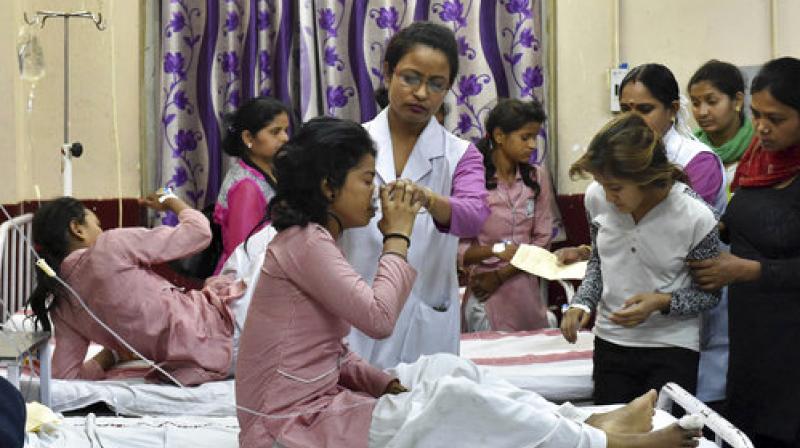 More than 100 students were hospitalized after a gas leak from a container truck left them with nausea and irritation in the eyes. (Photo: PTI)

New Delhi: The police has issued notices to various parties to join the probe in connection with the chemical gas leak from the Tughlakabad container depot that affected over 450 girl students.

Around 10-15 students are still admitted to the Hamdard Institute as a precautionary measure, a senior police officer said.

The police are sending notices to the companies involved in the transportation of the container, the customs department and the Container Corporation of India Ltd (CONCOR), the custodian of the depot.

“We have asked them to submit a list of the agreements and documents pertaining to the transportation of the container and its content,” he said. The officer said their probe will focus on ascertaining where the carelessness occurred and the agency responsible for it.

The police had said it is suspected that the leakage might have happened due to the containers not being properly sealed after being checked.

It also issued a show cause notice to the CONCOR on why environment compensation should not be imposed on its Tughlakabad depot and why should it not be shifted to some other place.

The NDRF had said a truck carrying 80 cans of chloromethyl pyridine had left the Tughlakabad depot for Sonepat at 3.30 am on Saturday.

The Delhi government, which ordered a magisterial probe into the incident, had issued a show cause notice to the depot authorities. The police had registered an FIR in the matter under various sections of the IPC and the Environment (Protection) Act against unidentified persons.

The Southeast district administration also issued a showcause notice to the Customs department and the CONCOR. Around 450 girl students were hospitalised on May 6 after toxic fumes spread due to chemical leakage.