The Creators Project, a global platform, features work of artists, who use technology to push the boundaries of creative expression. 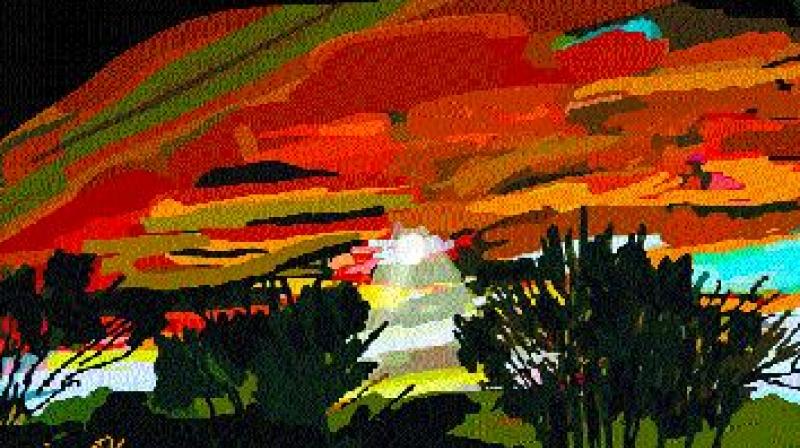 Had it not been for his wife Shobhaa De, artist and entrepreneur Dilip De would remain blissfully unaware of the potential he had to create beautiful paintings on his phone. “Whilst standing in my orchid gardens in Alibaug, I felt the urge to draw those beautiful flowers on my smartphone for my wife, Shobhaa,” recalls the 77-year-old businessman, art collector, and curator.

Thus began his uncharted journey of self-expression, like any amateur. The celebrated artist had his shares of struggles with the gadget, while trying to make the stylus his brush and the colourbox on the phone his palette.

“As an anaari with gadgets, it took me a while to learn how to use a phone stylus as a brush and dip it in the purported palette on my Galaxy Notebook,” he smiles. Soon enough, the 5.2x4 inch screen became his canvas, from where he not only was able to paint a Sakura for his wife but went on to create many beautiful pieces of art.

Preparing for his second exhibition titled Celebrations of the Unexpected, Dilip states that he starts working on the phone the moment inspiration strikes. “Be it in a restaurant, an airport or the bedroom, I am merely reminding and emphasising — as I joyously discovered — that art is omnipresent and artistic expression can be realised at any place and time,” he asserts, adding, “Art is no longer confined to a studio, but is truly the product of spontaneity and creativity achieved at one’s leisure.”

The Creators Project, a global platform, features work of artists, who use technology to push the boundaries of creative expression. In 2016, the body featured Dilip for his breakthrough in using smartphone and stylus to create art. And now, he has a school of art named after his work, called the The Smartphone School of Painting. “This is a painstaking process and requires extreme concentration and control over the stylus. My art is exhilarating and technology driven,” beams Dilip.

While dirtying hands in colour and spending days next to a life-size canvas works as therapy for painters, the businessman says that this latest art form gives him happiness. “I am a recorder with images and this new found experience serves as another form of meditation and self-discovery, which helps me improve myself, to be a better husband, father, brother, friend and a citizen of India,” smiles Dilip.

As this discipline helps him to be calm, his focus remains on exploring how technology can help create new art forms. “Traditional art — drawing, in particular — can be adapted to keep up with artistic advances in our technology-focused lives, beginning with our smartphones,” states the art curator.

The collector also wants to make art affordable, so that all sections of people can become art collectors, and also wants people to enrich Indian heritage.

Like his first exhibition, the proceeds of this exhibition too will go to charity. “This time, I have pledged to give proceeds to Jehangir Art Gallery, for their support to Indian art, and for modernisation of the gallery,” concludes Dilip.

—From January 27 to February 3 ,
At Jehangir Art Gallery