Why Iran’s supreme leader clubbed Kashmir with Yemen, and not with Palestine

In subsequent decades, Iranians watered down their rhetoric on Kashmir and strengthened ties with New Delhi. 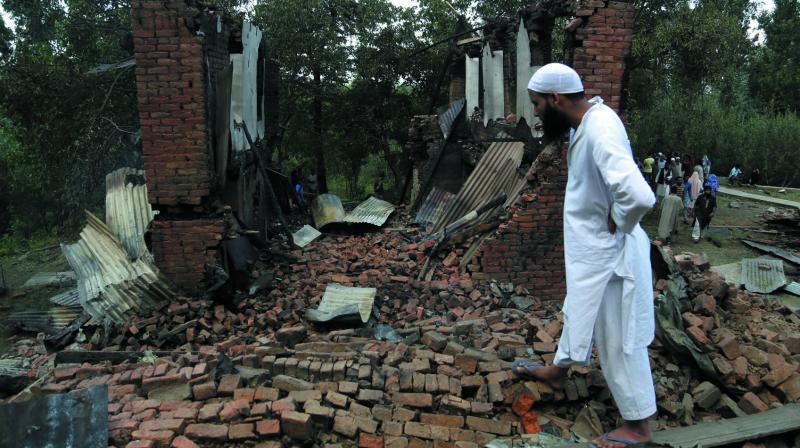 A Kashmiri Muslim villager looks at the debris of one of the damaged houses after a gunbattle at Bahmnoo village 58 km south of Srinagar, Kashmir recently. (Photo: AP)

When the then foreign minister Inder Kumar Gujral was about to undertake an official visit to Iran in 1991, the Iranian government conveyed to New Delhi that the minister was not welcome in Tehran. The Iranian rebuke came in the wake of an Indian military crackdown on pro-independence activists in Kashmir who Tehran considered were waging a legitimate struggle for independence.

Four years later, in 1994, Iranians abstained from a crucial UN vote in Geneva, which saved India from being censured for its human rights record in Kashmir.

In subsequent decades, Iranians watered down their rhetoric on Kashmir and strengthened ties with New Delhi.

Another factor, which perhaps played a more important role in changing the Iranian position vis-à-vis Kashmir, was increased Saudi involvement in the region.

The increased radicalisation manifested itself in wanton bomb blasts at Sufi Dargah’s and massacres of Shia- and Sufi-minded populations and subsequent purge of Shia’s from power centres all with tacit approval of the state. The community felt abandoned by the state of Pakistan they had helped create.

Pakistan’s choosing of Saudi’s over their neighbour is one thing Iranians have not forgotten and never reconciled to. Iranians are now striking back with something different and more potent weapon.

Iranians with a clear edge on this front over Saudi’s are out to defend and in many cases revive this stream of Islam.

The 1979 revolution which toppled 2,500-year-old monarchial system in the ancient land of Persia was Islamic in nature as the revolution was led by a Shia Islamic jurist.

For the first time following the 661 CE assassination of Ali ibn Abi Talib, the fourth “rightly guided” caliph for the mainstream Sunni Muslims and the first imam for his followers known as Shia (the party of Ali) a government came into being that claims to be modelled on the pattern set by Ali. Ali for Sufi’s is Shah-e-Wilayat, king of Sufis.

Shia’s believe Muhammad, the Prophet of Islam, declared Ali his vicegerent (Hadith of Ghadir) but majority decided not to elect him as their first caliph. And when he was finally chosen, 25 years after Prophet’s demise, intrigues and wars forced him to leave Prophet’s city Madina to far away Kufa in Iraq. Here again, he was not accepted as caliph by all Muslims. Muawiyah, the powerful governor of Damascus, who was appointed by Ali’s predecessor Usman bin Affan, rose in revolt.

Ali was assassinated four years later and his rule cut short. Ali’s successors, 11 imams of Shia’s, were not only disempowered by the successive Muslim rulers, but 10 of them were done to death one by one. Mahdi, the 12th and the last went in to hiding, and never returned. Shia’s believe Imam al Mahdi, went into occultation and will one day, reappear with Jesus. But before Mahdi went into hiding, he appointed four deputies to remain connected with his Shia. Shia Marajeh (highest religious authority) subsequently over the centuries came to be regarded as deputies of hidden imam. One among them was Sayyid Ali Hosseini Khamenei.

Ayatollah succeeded in establishing a government following the triumph of 1979 revolution in Iran. The 98 per cent vote he secured for his concept of governance, Wilayat al-Faqih or Rule of the Jurist, was declared by him as “religious democracy”.

Since for an overwhelming majority of Shia, the Vali-e-Faqih or the supreme leader, acts as deputy of the hidden Imam on earth, his job is now more diverse than the previous Marajeh who had no country to govern.

Islamic Republic under Vali-e-Faqih hence, for many within and outside Iran, is the guardian of the legitimate Muslim interests or the Ummah at large.

This may explain the complex nature of Islamic Republic’s foreign policy. Iranian officials often are at pains to explain their position on many critical issues, on which the government stance is invariably at odds with that of the supreme leader.

Yet except in case of Palestine, which houses the Al-Aqsa mosque, the first Qibla or the direction towards which Muslims faced during prayers before Grand Mosque of Mecca replaced it, Iranian stance towards rest of the issues facing Muslim world have been largely moderate.

In both Yemen and Bahrain, Iran is helping majority populations defend Saudi onslaught. While Saudi’s have launched a full-fledged war on impoverished Yemen, again a centre of tolerant version of Islam and home to first Sufi master Uwais al-Qarani, in Bahrain they are helping their tutelage Al-Khalifa family to crush pro-democracy uprising by the country’s majority population, which subscribes to Shia faith.

Strategically located Kashmir, considered gateway to Muslim world spanning from Kashgar to Marrakesh has been fulcrum of Persian-oriented Sufi Islam. It was Sufi masters Syed Ali from Hamadan and earlier to him another Sufi, Syed Sharafudin alias Bulbul Shah from Aradabil both in today’s Iran who introduced Islam to Kashmiris.

And like in Pakistan, Kashmiris too are facing a churning with the rise in ideologies which run counter to the teachings of Syed Ali and Bulbul Shah and innumerable other Sufis whose reverently built tombs dot nook and corner of Kashmir.

Kashmir is not entirely immune to new ideologies, partly influenced by the radical strides of people like Osama bin Laden and Abu Bakr al-Baghdadi.

Alienated and frustrated by the unending conflict with a bleak future stalking them, growing number of youth in Kashmir are finding solace in these radical thoughts. They no longer find peace, unlike their elders, in the Sufi shrines nestled in serene valleys.

They seem to be in a hurry to end their suffering and new ideologies offer them a quick fix solution: “Maaro ya marro”. They think there is nothing to lose. It’s better to die with the hope of going to paradise than live a long life of wretchedness on this earth.

While the state of India has failed to comprehend this phenomenon, as is apparent from the intensifying crisis in Kashmir, Sayyid Ali Hosseini Khamenei’s statement has been welcomed by those Kashmiris who feel let down by Ummah, which is chiefly led by Saudi Arabia but are at the same time wary of growing radical influences like that of Daesh propelled by Saudi funding.

Ayatollah, however, has been measured in his statement. He has not called for jihad in Kashmir unlike that in the occupied holy land of Palestine. He termed Kashmir a humanitarian catastrophe, which merits a solution as per wishes and aspirations of its people. For that he went a step further by urging Iranian judiciary to pursue the case based on its legal merits.

The writer is editor-in-chief of Kashmir Observer and India editor of Trans Asia News Service. He can be reached at: sajjad.ko@gmail.com