Scindia has to contend with the charge of head of campaign committee of the party in the poll-bound state. 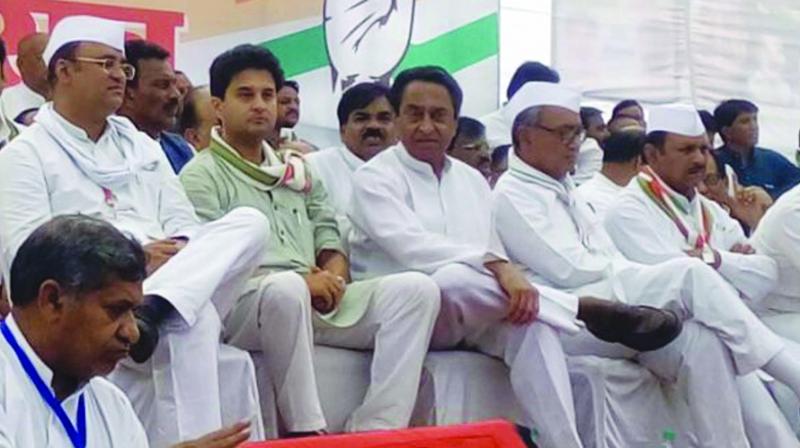 For, if talks in Congress circles are to be believed, wily Mr Singh “outsmarted” his “arch rival” and Guna MP Jyotiraditya Scindia, vying for the coveted party post, by ensuring that Mr Nath was made MP PCC chief. The selection of Mr Nath, a close associate of Mr Singh, paves the way for Mr Singh return to the centre stage of the party in Madhya Pradesh after a gap of nearly two decades.

Mr Scindia has to contend with the charge of head of campaign committee of the party in the poll-bound state.

Mr Singh, a former chief minister, had distanced himself from state party affairs after the Congress-led by him lost power in MP in 2003.

“The issue of changing leadership of the party in poll-bound MP had been hanging fire since eight months as the Congress high command was considering Mr Nath and Mr Scindia for the top job,” said a party leader.

“Mr Singh, by tacitly backing Mr Nath, foiled a bid by Mr Scindia to take control of the party and later stake his claim for the chief minister’s post in the event of a Congress win the Assembly elections due in November,” a senior Congress leader, who did not wish to be named, told this newspaper.

Mr Scindia, on the other hand, was repeatedly harping on projecting a chief ministerial face ahead of the year-end polls, thus, seeking a change in leadership in the state.

Mr Nath had then backed Mr Scindia to lead the party in the November Assembly elections.

Mr Scindia’s claim for a change in party leadership had received a boost when he led the Congress to victory in three out of four Assembly by-elections held in the state in the last one year.

However, the responsibility to lead the party fell on Mr Nath when Mr Singh insisted on his becoming the new PCC president. Mr Singh made public  his preference for Mr Nath at the closing ceremony of his six-month-long Narmada Parikrama programme on April 9.

The Congress went by the logic that Mr Nath, being one of the senior most leaders in the party, alone could bring together factional leaders, particularly Mr Singh and Mr Scindia, together to put up a united fight by the party against the ruling BJP in the Assembly elections.

But, Mr Nath may find the road ahead bumpy as far as galvanising the party is concerned, many senior Congress leaders confessed.

“Mr Nath has confined himself to his Chhindwara constituency in his entire electoral career spanning nearly four decades. He lacks connect with party cadres and leaders elsewhere in the state,” said on party leader.

Besides, he has hardly time to move around in the state to connect with the party cadres since polls are just eight months away. Moreover, his age may prevent him from touring extensively to connect with local leaders and workers.

“This will prove a major handicap for him in recharging ground level party workers,” a senior Congress leader told this newspaper.

“Since, Mr Nath has hardly any following in constituencies other than Chhindwara, he has to depend on the factional leaders to galvanise the party. He may end up facing the charges of favouring particular factional leaders in the process,” he said.

Some Congress leaders also allege that Mr Nath is not well versed with the nitty-gritty of state politics since he spent his entire political career at the Centre.

Grumblings came to surface on the very first day of his assuming office when he appointed former minister Chandra Prabhash Sekhar, believed to be a loyalist of Mr Singh, as PCC vice-president in-charge of organisation on May 1.

The decision has sent a confusing signal in the party cadres and left a powerful section of party sulking.