Approved by the government way back in May 2006, the NAVIC system should have been up and running by 2011. 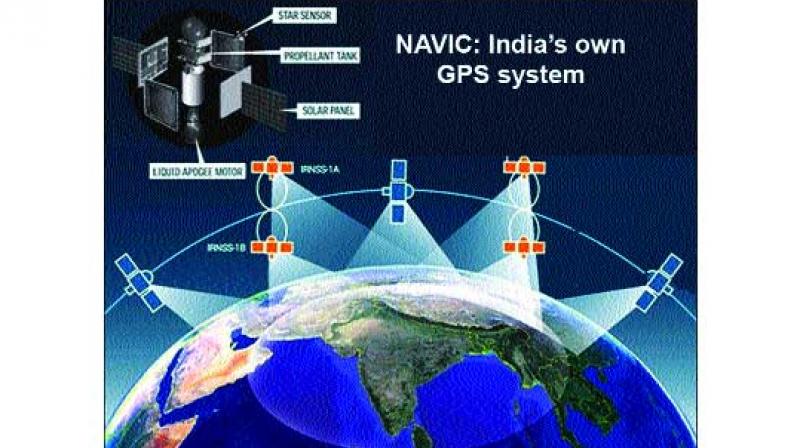 The national auditor in its report summed up several causes for the delay.

NEW DELHI: An independent satellite system called Navigation with Indian Constellation (NAVIC), often touted as the Indian equivalent of GPS and expected to immensely benefit the Army, Navy and the IAF besides the security and paramilitary forces, is yet to see the light of the day despite having spent 90 per cent of the funds allotted for the project that is already running more than seven years behind schedule.

Approved by the government way back in May 2006, the NAVIC system should have been up and running by 2011.

Once erected, the veritable “eye-in-the-sky” can keep watch over the entire country as well its surrounding region extending upto 1,500 km, including areas inside Pakistan, China and the Indian Ocean region, where military activity and movements have picked up of late.

The notable aspect is that about 90 per cent of the funds allotted for the project or about Rs 1,284 crore of the total cost of Rs 1,420 crore has already been spent till now even as the project is yet to see the light of the day, a CAG report tabled in parliament on Tuesday said.

“The development and deployment of NAVIC constellation, ground infrastructure, navigation, safety and certification, verification software was expected to be completed within five to six years from the date of approval of the project i.e. by December 2011,” the CAG stated.

The national auditor in its report summed up several causes for the delay. “Sites not being ready, revisions in the technical specifications, non-compliance with contract specifications by the contractor, administrative reasons, delays in shipment and delays in completion of civil works,” the CAG listed.

The NAVIC system is to comprise seven satellites that have already been launched between July 2013 and April 2016.

With the seven satellites already been placed in their respective positions in space, they remained idle from a period ranging from for 14 months to four years.

With the life of navigational satellite estimated at 10-12 years, the delay in operationalising the NAVIC programme would limit the duration of their utility, the CAG said, adding that a lot of ground facilities created for the programme also remained unutilised.

As of December 2017, the reply of the Department of Space (DOS) to various queries that the CAG raised was still awaited, the CAG said.

Abducted Jammu and Kashmir jawan's father to militants: If you have killed him, send me his body